Are We There Yet?

From the HRA Journal: Issue 286

It increasingly feels like we may soon get the gold price move we’ve been waiting for. I thought we wouldn’t see it until autumn, but I now think we could get a spring rally. That will help all the gold explorers and developers on the HRA list. Several of the latter are already outperforming their peer groups.

Improving sentiment should also help explorers, though I continue to think the best gains in that part of the space will be reserved for companies looking for something new. I’ve been avoiding adding too many companies that focus on recycling projects I’ve seen once or twice or more times before.

That helps explain the latest addition to the HRA Journal list which has an Extended Review inside. It's working on multiple projects that have seen little or no past drilling and feature completely new targets. Not the low-risk end of the spectrum, but the high reward one.

I’ll be sending you an invite to the next Metals Investor Forum, on May 25th and 26th, in a couple of days. The MIF organizers and some of my colleagues have already sent invites. The RSVP list is already a healthy size and we’re over a month out still. You needn’t worry though. As an HRA subscriber I will ALWAYS find room for you at MIF, but I would appreciate it if you do get the reservation out of the way when you do get the invite.

A couple of issues back, I wrote about the high level of interest at the PDAC in base metal, especially copper, stories rather than precious metals. Within the sector, gold seemed on the outs and companies talked about difficulties raising money for gold projects.

The subjectivity of views being expressed by companies makes them tricky to deal with. Sometimes projects have trouble attracting money because they are crappy projects. Or they are controlled by management groups with no marketing or financing skills. Still, the relatively negativity of gold explorers at PDAC and in more recent conversations has the contrarian in me interested.

The updated chart for spot gold appears below and, as always with charts, there are (at least) two ways to read it. Those of a bearish persuasion will point out that gold has failed to break through its mid-2017 high. Perhaps that resistance level is simply too much to overcome.

While I certainly share the frustration of those worn down by a series of failed rallies, I find myself taking a more patient and positive view. Gold has been in an uptrend since December, highlighted by the black line on the chart. Despite gold seeing a similar increase in volatility as equity markets, billion has held above the trend line and fought its way back above its 50 day moving average several times. 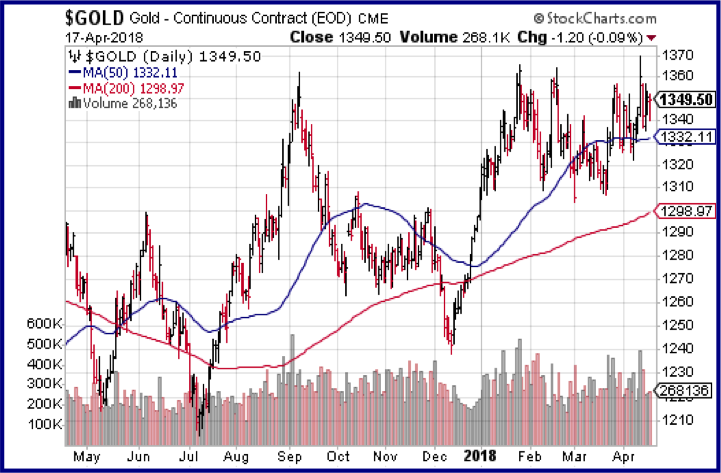 What's most impressive about this performance is that many things haven't gone gold's way lately. The new Fed chair is generally considered more hawkish than his predecessor. The bond market has priced in increasing odds of three more rate hikes.

And, as the chart below shows, commercial traders in the gold market have significantly reduced their long bets on the metal, even as the price struggled higher. That means there has been sufficient buying pressure from other market players to overcome selling by large speculators.

Last, but certainly not least, gold miner shares have enjoyed many recent sessions where they outperformed the bullion price. We haven't seen that for many months and many, myself included, consider that a particularly important "tell" of a rally that could have staying power.

I'm not a gold bug. Its taken some doing for me to convince myself, but I think the odds of gold breaking through the $1360-1370 resistance level have improved dramatically. I think the repeated surges higher, often in the face of political and macro news that should have weakened gold is a very bullish sign. I think the day is coming when gold will break through resistance and surge higher. I don't have a firm timeline, but I would not be surprised if the next move higher is the one that succeeds.

Things have been less positive on the base metal side recently, though I don't think we need to be stepping out onto windowsills. Most of the base metal, and particularly the bulk material sectors have weakened because of trade tensions. It's still too early to tell how serious an impact trade will have, but it's clearly not going to be a positive. 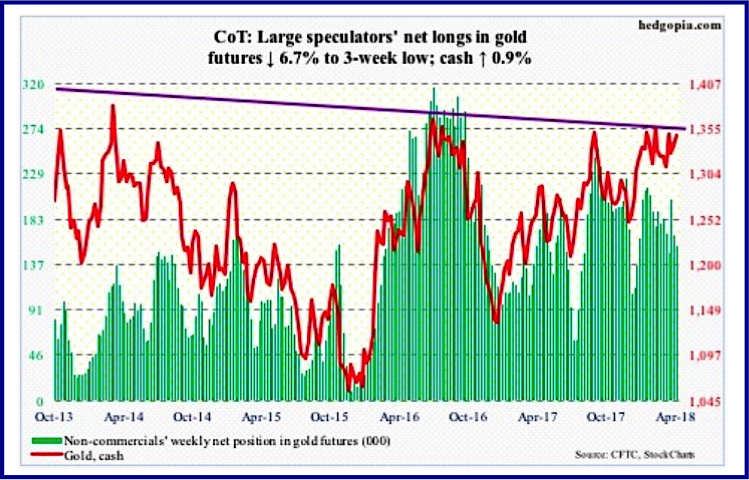 A couple of materials, notably aluminium, have been helped by recently imposed Russian sanctions. I don't think those sanctions will have any effect on other metals like PGM that Russia is a large supplier of.

Just released economic readings from China were in line with estimates and did show some slowing. They also showed that services and consumer spending account for an increasing part of the Chinese economy. Beijing's rebalancing efforts appear to be working.

For all the economic bullishness emanating from Wall St, we've seen renewed weakening of a number of hard US economic indicators. Recent GDPNow readings for US Q1 growth have dropped back to 2%, half the level they started the quarter at. Nothing dramatic, but enough to -again-seriously call into question the "economic acceleration meme".

The weakening of economic readings has been even more pronounced in Europe. Like the US, sentiment indicators remain relatively strong but spending and fixed asset investment has softened. Some of this may be due to trade tensions. While Europe hasn't been the target of President Trump's ire to the extent China has, it has been catching some flak. Europeans are much more aware than most Americans seem to be of the importance of trade to their economies.

With all this negative spin, it's not surprising that base metals, particularly copper and zinc, have been subjected to worsening investor sentiment. Copper prices have dropped a couple of times but $3.00/lb, an important psychological level continues to act as a floor. There is no expected near-term supply surge and the longer-term environment looks particularly good. I think copper will be fine as long as the world economy does manage to hold together.

Things have been much tougher in the zinc space, relatively speaking. Zinc has traded as low as $1.40/lb recently, and there are suddenly a lot of metals analysts getting bearish. The problems with the zinc market center in China where there have been (relatively) large increases in warehouse inventories for zinc.

Analysts are toting up the incoming zinc supply and assuming the worst. I'm not yet bearish myself. Most of the "new" supply is old news and mine completions and expansions have a way of always taking longer than expected. Increased inventories in Shanghai has some market watchers assuming the much-predicted Chinese supply surge is upon us. I think its just as likely the zinc dumped into warehouses is coming from speculators and perhaps smelters that are trading their book. There is no evidence yet of increased growth in Chinese mine supply and, personally, I'm skeptical it's coming. It's also worth noting that there are increased concerns that zinc smelter capacity will not increase fast enough to meet supply in coming years which will also support refined zinc prices.

Last, but not least, we have the US Dollar, which all commodities trade against. As the chart below shows, the USD has been testing lows, just as gold has been testing highs. Even increased odds of four Fed rate hikes this year hasn't helped. The political volatility doesn't seem to be helping.

An even bigger problem for the USD is the increased recognition that US federal deficits are going to get a lot worse over the next few years and stay that way. Unless something turns the clear downward trend in the USD around, it will continue to support metals prices. 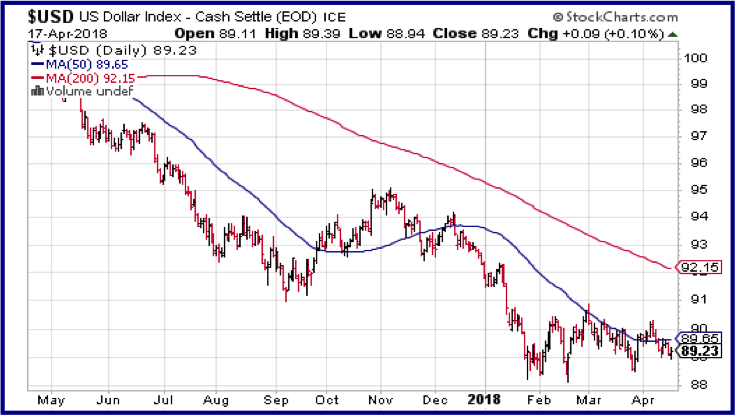