From the HRA Journal: Issue 292

Events conspired to give us a small bounce in the gold price. Nothing amazing but at least a move in the right direction. The positive news was, for once, magnified in the junior sector. We just had the best couple of weeks on the Venture exchange we’ve had for a long time, including ten straight up days.

We can thank discovery stories for that, more than metals prices. I think there is reason to hope for better metals prices, especially in base metals if we ever see a reduction in trade tensions between China and the US. It doesn’t sound like the recent trade meetings went very well so we’re not there yet. China does seem to be trying to put a floor under its currency, which should help metal prices until some sort of trade resolution can be reached.

I don’t know how many legs some of the recent discovery stories have but the market reaction tells us how badly traders want more of them. A couple more good ones, that don’t fizzle immediately, will do a world of good for the whole sector.

Maybe you’ll find a couple of those at the next MIF on the 28th and 29th of September. Don’t forget to register for that using the link below:

We're almost at the end of a summer few resource traders will get nostalgic about. Its was a lousy one, even by the low standards of the summer doldrums. Most didn't expect much from the summer months. The more important question is whether we're setting up for the common autumn rally.

So far, metals prices aren't really cooperating, though it at least looks like things are bottoming. The better news recently has come from the equity side of the resource sector.

Several small explorers have announced "discoveries" in the past 2-3 weeks that have captured traders' imaginations. It's far too early to say most of them are "real" and most started out with very low share prices. Nonetheless, I've been quite impressed with the amount of volume several names are trading, even if I don't think as highly of their news as others clearly do.

A lot of the high trading volume is day traders to be sure, but its still encouraging to see even them arrive. The important point is there has been enough trading to allow for profit taking, which allows traders to redeploy in other sector stocks. There wasn't much of that until quite recently.

In several cases, those stories also attracted financings (particularly the one HRA is following at the SD Alert level), even though the overall level of secondary offerings in the junior resource sector has been low. Hopefully, some of these discoveries will continue to perform and get joined by other new discoveries.

Fast gains from discoveries is what generates the "FOMO" (fear of missing out) in this sector, after all. But those discoveries need to hold some price for traders to be able to take profits and other traders to feel envious. We don't want to see traders just doing round trips on one-hole wonders. In the past, its been a handful of good, lasting, discoveries that kicked off sustained rallies in the junior resource space.

The increased activity is even noticeable now in the beleaguered TSXV Index. As this is written, the Index is up about 9% in two weeks, having posted a string of 10 positive days in a row.

The index still looks pretty awful and its not an Index I think is that useful, but it's still a positive indication. It's been a long time since I've seen the Venture index rise 10 days in a row and the increasing trading volume is encouraging. Traders appear to be positioning for an autumn rally.

One other thing that may help our chances is money supply. There have been several takeovers announced in the past couple of months. The largest, Arizona Mining, just closed. That was an all-cash deal. In theory at least, a portion of that money will flow back into the resource space, though most would be targeted at more developed projects. 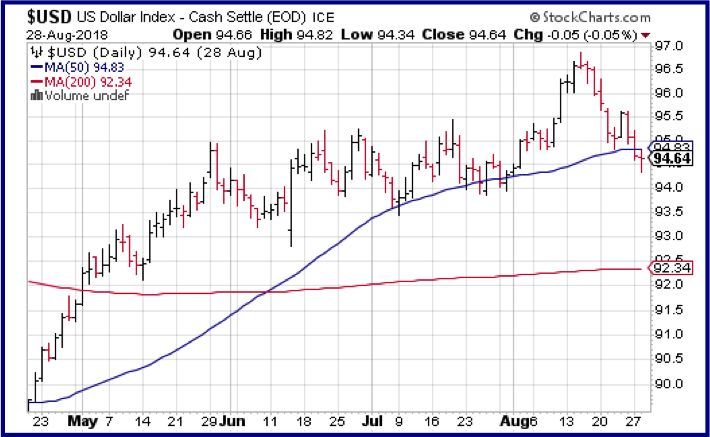 I've never viewed institutional money as a panacea but it's the quickest place to raise large and lots of funds had told me they had no new cash for placements. The mini rush of takeovers during the summer will add to available funds. If that money re-enters the system when the resource sector seems to be doing well, its more likely to be left in the resource funds for them to re-invest. This isn't as obvious a catalyst for a good autumn, but it's a real one.

That brings us back to macro factors that might help a good rally develop or be sustained once it does. The chart of the US Dollar above helps explain why gold prices got so ugly then subsequently bounced (some).

We got another assist from President Trump who again complained about the high value of the USD. That helped start a bit of mean revision that accelerated after US Fed chair Powell gave his keynote address at this year's Jackson Hole central bankers conference.

Powell's speech wasn't hardcore dovish, but he did admit that inflation hasn't been accelerating and looked like it might not anytime soon. If you find that admission surprising, take a look at the chart below and remember that the Fed prefers the "Personal Consumption Expenditures Deflator" as an inflation measure. Core PCE has just gotten back to 2% – the Fed's target-and has been sitting there for a few months. 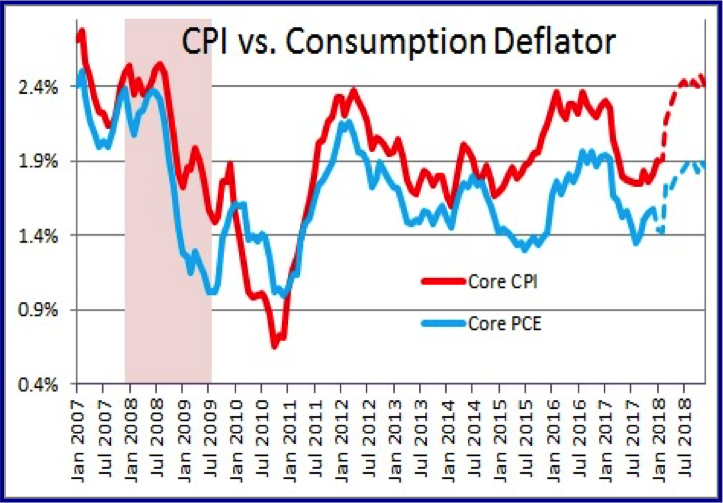 Traders took Powell's comments as meaning he would slow rate increases going forward. I think it means the current rate hike cycle will end at a lower peak rate, but I don't think it will change the trajectory short term. I still expect the Fed to hike again in September and December.

The current bounce in gold prices has stalled out due to extreme "risk on" sentiment. The S&P and NASDAQ indexes are hitting new highs and risk measures like VIX are dropping like a rock. The latest drop in gold came from the release of consumer confidence numbers that are at an 18-year high. That's nice, but the fact it's a driver tells me only that, right now at least, New York markets just want a reason to go up. You can come up with "reasons" but the rally is as much, or more, about momentum than anything else. 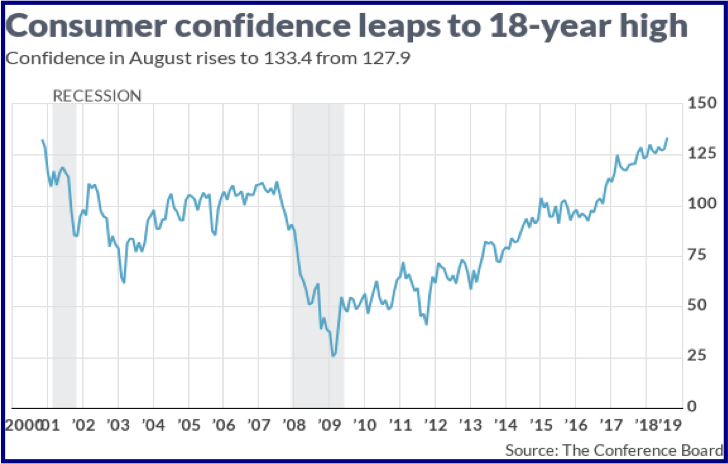 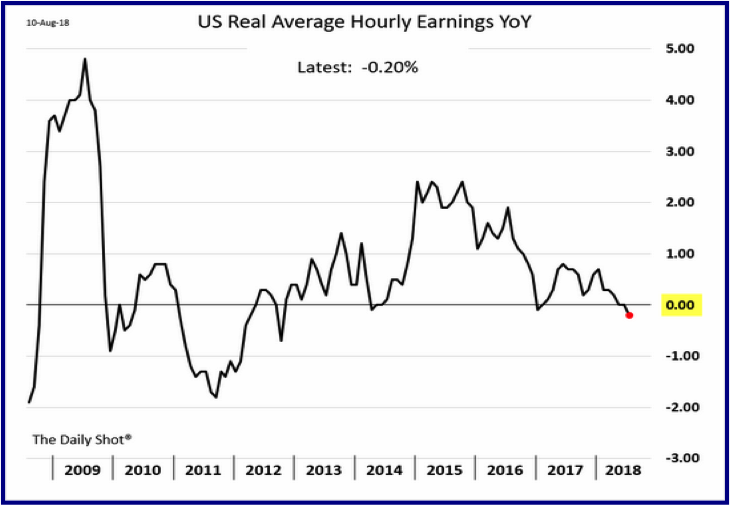 I suspect the chart above, which you have seen versions of on spending. Year over year, the change in real hourly earnings in the US are now negative. That's not an expansion killer, at least not right away, but its bound to start putting a crimp in spending.

It may help if Powell is right and inflation doesn't increase any more. That may give wages a chance to catch up. As always, a careful reading of the US non-farm payroll report due in a week is worthwhile. Wall St will be watching the headline jobs number. I'll be watching the month over month change in hourly wages. 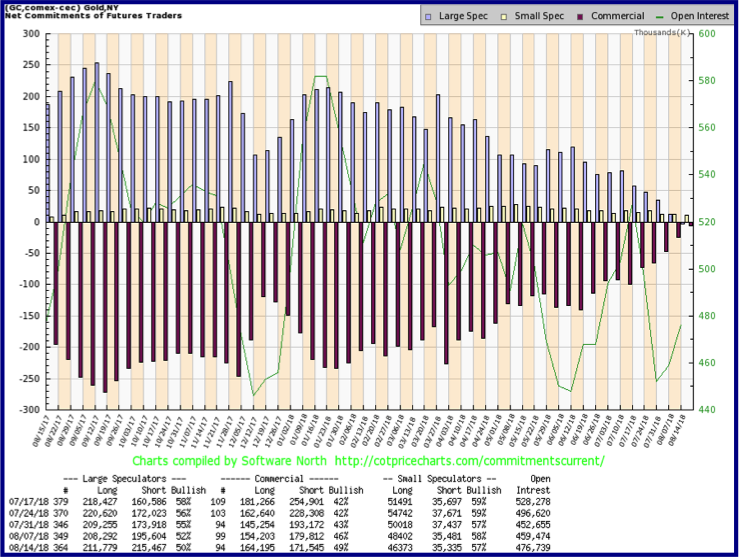 We got a gold price bounce, but the market positioning is still extremely bearish, which is what we want. The chart above shows weekly commitment of traders positioning in the gold market. You can see that "Commercials" – the purple bars below the center line – are now just barely short as of last week's report. A few short contacts may have been added when gold bounced last week but this is still a very favorable set up. 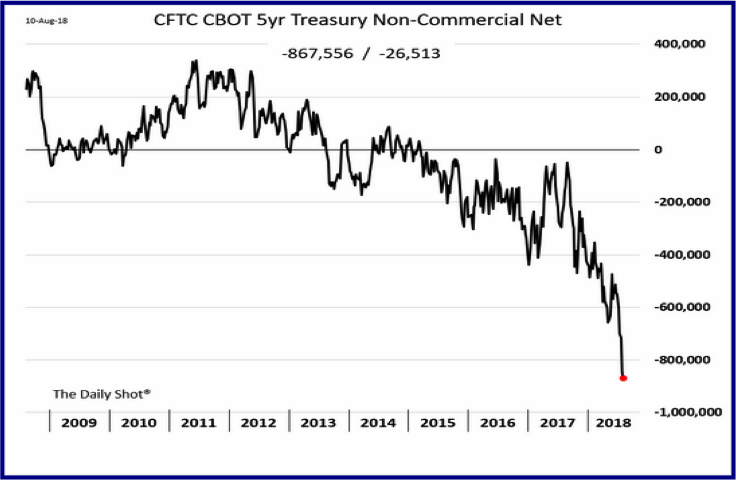 The last chart in this article, above, shows the speculative short position in the US Treasury market. The level of negative positioning is unprecedented. As noted above, I expect the Fed to raise rates again in September. Even so, there is a room for a violent short covering rally in Treasuries at some point. That would drive down market yields which would be a drag on the US Dollar.

The USD is still range bound, but its also failed to break out yet again. We've been seeing some mean revision in the Emerging Markets. That is very welcome as we were getting close to the point were the contagion could have gotten out of hand.

We've also seen Beijing trying to put a floor under the Yuan. All these things in concert could lead to a bit more weakness in the USD. That's all we'd need for another leg up in gold. Base metals need trade tensions to ease, which hasn't happened yet.

Metals aren't yet a tail wind, but they may cease to be a headwind. If they can do that, and we get a bit more good news on the exploration front, we should have the sort of autumn market that will help us all forget a lousy summer in the junior space.