From the HRA Journal: Issue 303

The editorial in this issue deals with a subject that I think is too ignored. It's one of THE main reasons for the current bull market in NY but rarely gets talked about, and almost never gets talked about for what it truly is, which is a form of insider trading. I don't want to sound like I condone insider trading. But I do get sick of Wall St being holier than thou when it comes to junior markets. Wall St has no reason to feel virtuous. To paraphrase the old saying in tech- when it comes to Wall St, insider trading isn't a bug, it's a feature.

All that risk on market love is generating continued selling of bullion. We're just going to have to grit our teeth and deal with it until we see some weakness in NY. There is little sign of that yet, but the cynic in me sees the impending Uber IPO-with a valuation base of $100 billion for this perennial money loser-as a classic sign that there may be a "bad moon rising" over Wall St some day soon.

Weakness in precious metals looks like it is ushering in yet another PDAC Curse year. The juniors haven't moved much yet, but it's hard to see how gravity won't soon be felt if we don't get an upleg in gold prices very soon.

Some family stuff and a tax return from hell pushed this issue back a bit. I'll start on the next one immediately to get the publishing schedule back in line. Happy Easter to all and may the Easter Bunny be as good to you as the Unicorns are to NASDAQ.

While the resource sector has been decidedly 'meh' for the past couple of months, going precisely nowhere, you can't say the same for the Big Board. As the chart below shows, the SPX has been doing just fine. It's only a couple of percent from its all-time highs.

We know most of that can be attributed to loose monetary policy and rock bottom interest rates. Those definitely helped and, as always, the main beneficiaries are the small fraction of the population that owns most of the equities.

What most don't see, or refuse to acknowledge, is that the biggest gains on the Big Board accrue to those who make a living off of insider trading.

I always find it laughable when some schmuck gets charged with insider trading some small amount of stock based on a tip or knowledge of a future corporate event.

Don't get me wrong. I think insider trading is a serious offence. The part I find laughable is that infractions that are minor in the scheme of things become headlines while the insider trading that goes on all day, every day not only gets ignored, it gets celebrated. Think I'm exaggerating? Well, if you do, I've got two words for you: Share Buybacks. 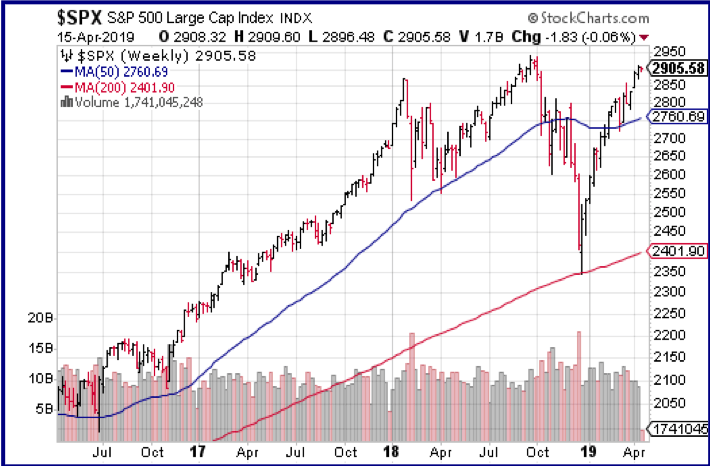 Most traders don't equate share buybacks with insider trading. Indeed, Wall Street and its cheerleaders put a lot of effort into convincing everyone that buybacks are a social good, not an enormous waste of money. Not surprising, since people running Wall St investment banks are some of the biggest beneficiaries of them.

So many companies announce share buybacks these days that it's easy to miss the forest for the trees. You need to look at the total amounts spent on this item, market-wide to appreciate the scale of the problem.

In 2018, US companies announced One Trillion Dollars (yes, you read that right, $1,000,000,000,000) and it looks like 2019 could come in at close to the same amount. The NYSE is a huge equities market, but even in a huge market a number like that stands out. How important are buybacks to the gains we've seen since 2008? Well, put it this way. Share buybacks, plus Fed purchase, represent all of the net buying on the NYSE during the current bull market. All of it.

So where does the insider trading come in? Simple. Buybacks don't appear out of thin air. They are decided on and voted on by corporate boards. And they dovetail with another important and, in my opinion, unsavory trend-management compensation.

Its well known to all that there has been an exponentially rising trend when it comes to executive compensation, especially and particularly in the US. Fortune 500 CEOs in the US, earn 155 times more per year than the average worker.

I find this trend pretty disgusting. Not because I dislike the idea of high pay. And, as someone who has founded a couple of successful companies, I'm not hypocritical enough to begrudge founders the fruits of their successes. If someone starts and grows a company and makes a killing by increasing the value of it, more power to 'em.

No, what bugs me is that most of the high earners in C Suite these days are not founders. They are professional managers that have gamed the systems to bestow huge incomes on themselves. The trend in increasing executive compensation is almost exclusively due to increased use of stock options and "restricted share units" (free shares) in pay packages. Fortune 500 executives make most of their money from stock options, not wages, though the wages are usually impressive enough.

Where does the "insider trading" come in? Simple. Company boards grant themselves stock options. They then vote for huge share buybacks. The share buybacks reduce the outstanding shares on hand. That, in and of itself, increases earnings per share. Indeed, some observers have estimated the reduced share count from buybacks account for the majority of EPS growth in the past few years. Higher EPS means higher share prices. Higher share prices mean those free options management granted itself suddenly become very valuable. Management cashes in by exercising options and selling the stock, much of which is bought back by the company itself. 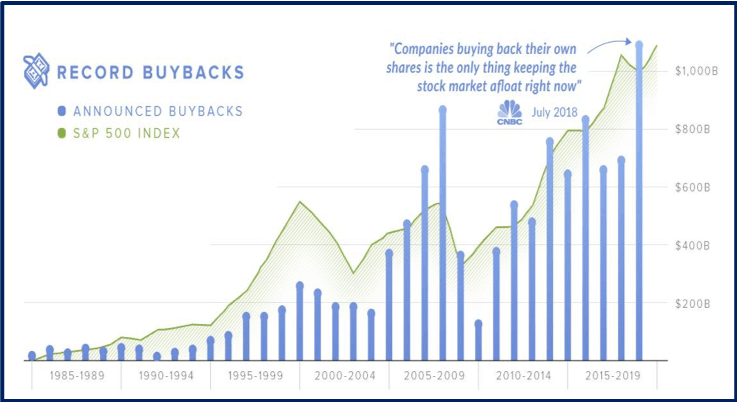 It doesn't get much more incestuous than that. Ever wonder why insider sales are so high when the bull market seems to be so healthy? Wonder no more. Its how these management teams pay themselves.

The chart above shows the increasing trend in buybacks going back to the mid-1980s. Share buybacks were actually illegal for most of the 20th century as they were considered a form of insider trading. Which they are. They were allowed again by Regan in 1982, under heavy lobbying pressure from Wall St.

The chart below shows the gross share issuance, share buy back and "net" issuance going back to 2007. You can see that net issuance is negative (the overall pool of shares is shrinking) for most of that period. Especially last year. Wondering where all the money corporations saved from last year's tax cuts and profit repatriation went to? It certainly didn't go to capital investment as the proponents claimed it would. Nope, most of it went to share buybacks. 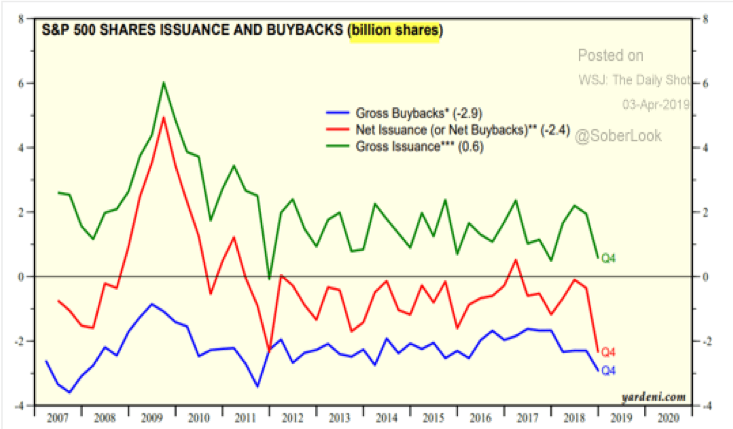 Wall St is addicted to buybacks. Companies get rewarded for announcing them, even when they issue debt to pay for them.

Fed largesse in the form of low rates and the buyback frenzy go hand in hand. Much of it is debt fueled. It begs the question of how corporations goose their earnings if interest rates increase and they can't take on debt to artificially increase EPS and give management a free payday. I still expect the next recession to be mild, in part because the Fed will have super loose monetary policy. This is one more reason they have to. High rates would have a much more serious impact on Wall St than many fear, because of a forced reduction in buybacks.

This is all perfectly legal, though it wasn't for decades. That doesn't make it morally superior. The next time someone tells you how murky the resource sector is, point out to them that there is millions of times more insider trading on the Big Board. The only real difference is that its officially sanctioned, and celebrated, on Wall St.

There were few real reforms after the last financial crisis. I think there is plenty of room, and reason, for more reform after the next one.