Eye of the Beholder

From the HRA Journal: Issue 312

How about that SPX eh? Ever since the start of October it seems Wall St can do no wrong. US metrics have improved some and impeachment is a non-event as the US Senate would never vote for it. Both of those things calmed traders. Calm enough that they suddenly don't seem concerned about the US-China trade deal. That's convenient, since it looks like that deal almost certainly won't happen now. A lot of traders are also bullish because the US yield curve has largely un-inverted. That just tells me a lot of traders don't understand yield inversions as a signal (spoiler alert-sudden steepening after an inversion is not a good thing).

We had a great turnout for MIF which was a relief because we had to switch venues due to a labour dispute. We had a great group of presenting companies, including several on the HRA list. You'll find links to presentations and interviews with companies in their portion of the Update section. For other companies and for the speaker presentations, please visit the MIF YouTube channel.

Eye of the Beholder

Anyone who was paying attention or writing placement cheques in the last month knows that things went from warm to very cold in the resource space over a very short length of time.

I talked about how I thought we needed to shake out some speculative longs in the gold market last issue. I'm surprised that's not happening faster. It's only recently we've seen spec longs declining and the gold ETFs seeing any real amount of withdrawals.

We have seen the pullback in gold prices I feared we would. It's still open to debate whether the recent low will hold or be followed by another lower one. I'm starting to think the recent $1450 low may hold, though there's no convincing move to the upside yet.

Weak handed longs only being partially flushed out does give me pause though. Even though the funding environment for juniors got much tougher we haven't seen the same reduction in sentiment in the gold market itself. Part of the explanation is simply that those that buy juniors and those that buy gold futures are not the same people. They seem to be following different cues.

I think a bit more pullback in gold prices to an "obvious" technical level or a steep dive and rebound might improve the sentiment for those that trade juniors, even if it had the opposite impact on those that trade bullion. Stock traders know we're in the throws of tax-loss selling. And it's been a year that provides plenty of candidates for tax-loss sale. It would take something pretty dramatic to turn things around in the short term. Something that feels more like a bottom. 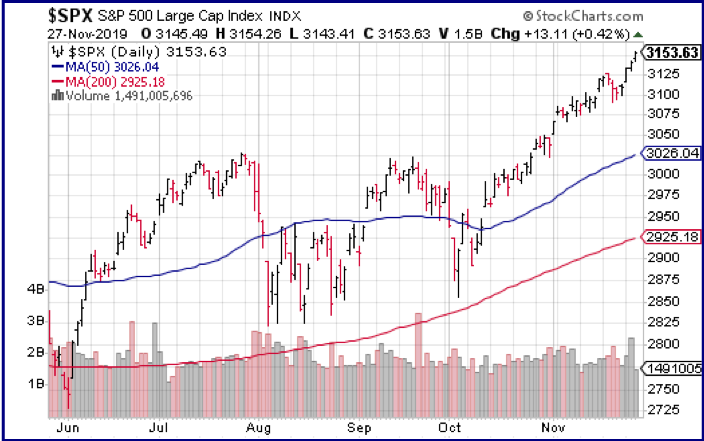 Even so, I think things are setting up for a nice move for both gold and gold stocks. It may not start until tax-loss selling tails off but I don't think its more than a few weeks off.

The gold chart below doesn't look fantastic. $1450 will have to hold for my "better days starting soon" thesis to hold. But gold feels like it's had just about everything stacked against it for several weeks now. I'm mainly impressed that we haven't seen more important levels get violated to the downside. 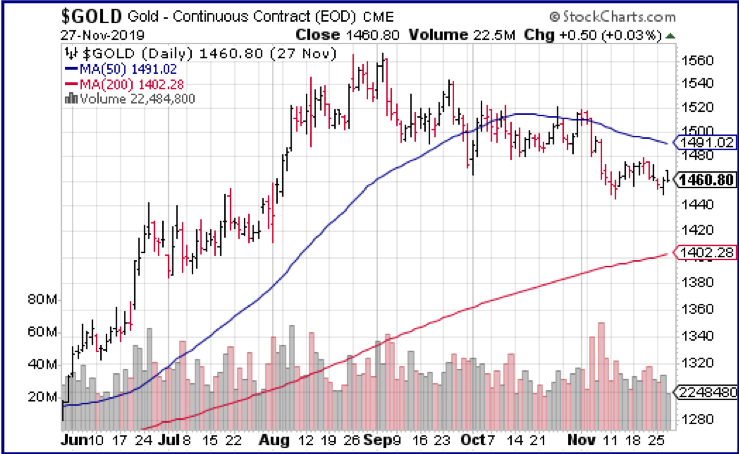 General equities, interest rates and the $US have all been unfavorable for gold prices. The chart on the previous page of the SPX shows an index that just doesn't want to go down. It's been an amazing rally since the start of October. Equity bulls have come up with plenty of reasons for the advance but, increasingly, it looks like only one thing mattered: liquidity.

The chart below shows changes in the size of the Fed balance sheet. The reversal since late September has been amazing. The Fed spent two years reducing the size of its balance sheet through quantitative tightening transactions, then reversed 40% of that move in less than two months. 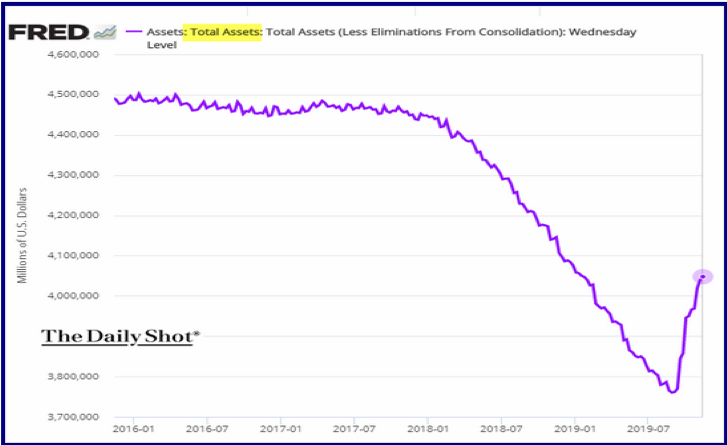 The next chart shows weekly Repo market transactions by the Fed. While I've said before that I'm on the fence about whether these should worry us, Wall St doesn't have that problem. The Fed keeps insisting these transactions "aren't QE", but traders aren't buying it. As far as Wall St is concerned the Fed is back to pumping liquidity into the system and all's well with the world. I think its absolutely no coincidence that the latest SPX rally coincides almost perfectly with the renewed growth in the Fed balance sheet.

Traders view the Fed's liquidity injections a purely bullish. They could be right, though I find it strange that so few wonder why the Fed suddenly has to keep undertaking, and increasing, these repo operations.

I agree with the bulls that changes in banking regulations explain much of the drop in "excess bank reserves" but it still doesn't explain why this is happening now. Wall St is a Goldilocks market right now but things like the repo activity make one wonder if there is more turbulence under the surface.

Another area bears have been highlighting is the high yield credit market. Here too, bears may be overstating things but credit spreads have been widening again. That implies either an increase in bond supply that is hurting prices or increased concern about defaults. 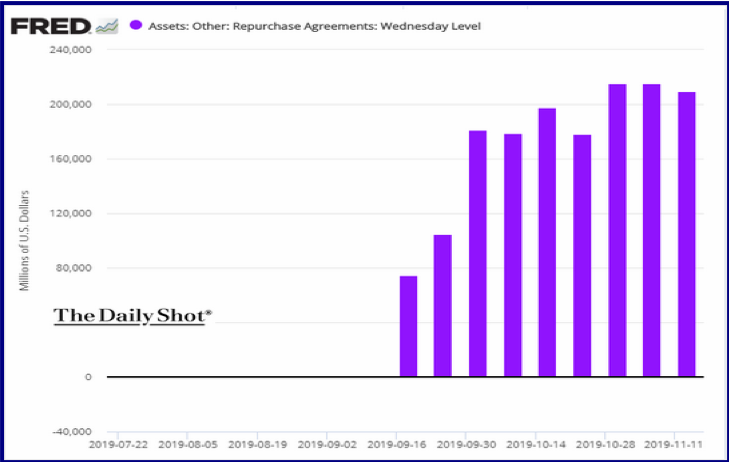 Yields for "junk" bonds have been soaring lately. Some consider that the canary in the coal mine, the first sign of real trouble in the bond market. Perhaps, though it must be said that increased yields on bonds issued to struggling oil producers are the real culprit here. That's a real issue, but maybe not an economy-wide one.

Spreads for "barely investment grade" issues, the BBBs haven't widened nearly as much but, if we do see real trouble start in the bond market, this is the tranche that could provide it.

BBB rated bonds form a much larger, and growing, segment of the corporate bond market. They're getting issued by increasingly leveraged companies and issued with less covenants (rules about things like minimum working capital that help protect bond buyers) than ever before. Triple Bs now constitute over 50% of the investment-grade bond universe.

The main reason this is worrisome is that BBB is the lowest investment grade. If an issuer drops even one bond rating grade they fall to "junk" status. That means most bond funds can't buy-or own-it anymore. That makes for brutal selling and leaves the bond in the much smaller and less liquid junk bond market.

Odds are this won't matter unless the US falls into recession or something close to it. I agree with the bulls on that. I don't agree there is nothing to worry about though. Bond bulls are acting like we never see credit downgrades when the economy slows. We always see downgrades in even mild recessions. The worry is that there are a handful of well-known, economically sensitive companies carrying huge leverage. It would only take a couple of these bemouths getting downgraded by a single level for all hell to break loose in the junk market.

A lot of these BBB bonds were issued to finance share buybacks, not purchase income-generating assets. Companies with high debt loads will need their "real" business lines to bail them out since the bond money's long gone.

The increasing worries about the high leverage end of the bond market might help explain the graph on this page. There is currently a huge divergence between consumer sentiment-which is great, and CEO sentiment -which is awful. Most consumers are barely aware the corporate credit market even exists, while CEO are frequent users of it.

I've always hated the term "dumb money" but I have to admit that phrase has been coming to mind more often lately. One of the many drivers of the current Wall St rally is the fact the yield curve "un-inverted". A surprising number of traders have rejoiced about that and used it as proof those of us worried about the inversion in the first place were just perma-bears.

That reaction, to me, is just proof that those rejoicing don't know much of anything about how yield inversions work. An inversion to a large enough portion of the yield curve for a long enough period-and we met both tests-is a reliable warning a recession is coming. They can happen pretty far in advance of a recession start though. Yield curve steepening, after an inversion-which we just had-tends to occur much closer to a recession start. It's the inversion then the steepening that's the real warning. 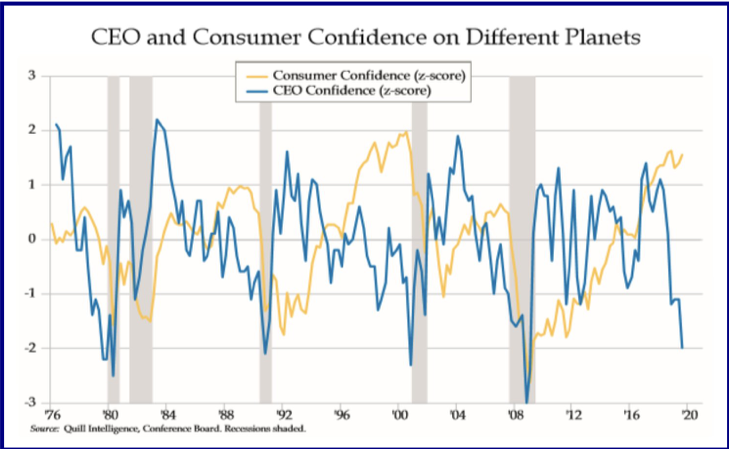 Another example of dumb money is the graph above. Notice how CEO sentiment falls sharply ahead of recessions while consumer sentiment soars, right up until things start falling apart. Coming out of recessions, CEOs get bullish much faster while consumers obsess about the recession until long after its over.

In part, this is due to CEOs being forced to look ahead to plan their company's futures, deciding when to invest and when to get cautious. They do, or should, have access to better real-time information about things like sales and order backlogs. And, let's be fair, its a lot easier to be strategic when you get paid like a CEO. Less so when you must live paycheque to paycheque like most consumers.

This latest rally in stocks has been heavily influenced by retail investors. So far, they are looking like the smart ones. I hope it continues for their sake. Recent economic readings in the US has improved so they may get the last laugh.

So why would I expect the gold space to improve? Because I don't see much room for improvement on Wall St and year-end can be tricky for equities, and we're entering a seasonally stronger period for gold.

Sentiment readings for Wall St are above 90%, and sentiment for VIX is under 10%. Trends can always go farther than we expect, but when the bulk of traders are that complacent, we're pretty much run out of buyers. For that reason alone, I think we'll see Wall St start to tail off which should put the base under the gold market we've been needing.