From the HRA Journal: Issue 284

It was a busy week at both MIF and PDAC.  News flow has slowed right down now though.  I do expect news in the next couple of weeks from a handful of HRA list companies that have drill and field programs underway.  Those are listed in the first page of the update section.

A return of risk on markets and expectations of a Fed rate hike this month have kept gold in the lower part of its recent trading range.  The last few times the Fed raised rates we saw good gold rallies following them. I’m hoping for another one after the March Fed meeting.With a weak gold market, traders seem to be focusing more on base metals, even though those metals also had a rough week.  That was definitely evident at PDAC and to a lesser extent MIF.  With few exceptions it was base metal companies getting the most attention.

It certainly seemed like base metal stories were generating the most buzz, even at an early stage level which is not usually the case. That helps explain the timing of the company that has an extended review in this issue.  It extends to the company I think had the biggest “MIF effect” and the development level company moved to strong buy.

If you couldn’t make it to MIF, don’t forget to check out the links to the presentations in the update section.

Last week was a busy one, between MIF and the PDAC.  The inaugural MIF in Toronto went very well, with a large crowd and an excellent company list invited by the speakers.  Links to company presentations and CEO interviews for companies on the HRA list can be found under the company names in the Update section.

PDAC was also successful, and the organizers made much of the fact attendance was the best its been since 2013.  I don’t read as much into that about market conditions as the PDAC itself does. This is, first and foremost, an industry conference after all.

Most PDAC attendance comes from large miners, many of which send scores of employees to the event, and governments and service companies looking for investment and customers.  Nothing wrong with that of course.  It does show industry interest and there did seem to be a lot of corporate development teams from larger miners running around looking at projects.

I would argue that the level of commitment shown by an investor paying their own way to MIF is much higher than a mining company employee or bureaucrat for whom the PDAC is a junket on their employers tab.

Attendance at the Newsletter Writer day was certainly lighter than last year.  That isn’t surprising since the sector has not been rewarding many traders lately and there are weed and crypto stocks to chase. I’m still confident there are better days ahead and I’m pleased with the way a number of the stocks on the HRA t are trading in a lacklustre market.  I do think its positive that so many majors still seem very hungry for new projects.  It will take announced M&A deals though, not just talk, to get traders on side.

In the larger markets, there has been so much packed into a short period that its hard to know where to start.  The US February payroll report was a huge beat.  In terms of new hires, the report was impressive, showing a 311k new jobs versus the consensus estimate of 205k.

It was a large enough beat, with prior months adjusted upwards, to leave me suspecting a statistical anomaly but that doesn’t matter in the short term.

Traders were actually terrified we should get a strong jobs number, because a strong January payroll report is what kicked off last months 10% correction on the SPX.

The reason we didn’t get that reaction this time is because wage gains moderated and last months hourly wage increase number was also revised down a bit.  The year over year wage gain moderated, dropping from the 2.9% that freaked out traders last month, to 2.6%. That’s a fairly big one month drop and pretty much what I predicted would happen a couple of weeks ago.

The weak wage gain number “saved” the report, and the SPX took off running, traders picturing another period of “Goldilocks” economic reports ahead; not too hot, not too cold. 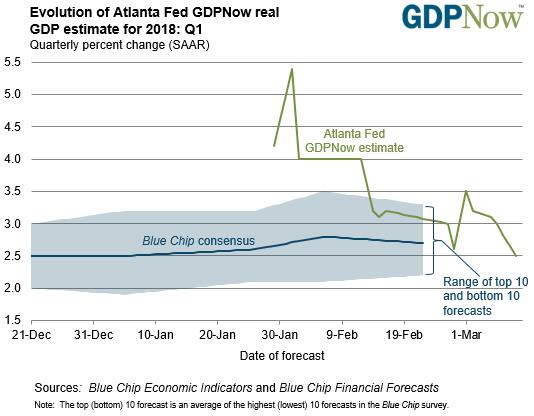 They may turn out to be right about that.  I imagine many were surprised by the GDPNow estimate that was revised right after the payroll report. It showed a large decrease in the estimate for Q1 GDP to 2.5%, rather than the increase some may have expected. It was revised down because the model now predicts lower consumer spending and private investment this quarter. That makes sense.  Workers can’t spend raises they aren't getting and are already stretched when it comes to borrowing.

Right on top of the payroll report was a report out of North Korea that boy-dictator Kim Jong Un is willing to meet face to face with Donald Trump and may even be willing to put dismantling of the North Korean nuclear arsenal on the table.  That news definitely accounted for some of the surge in world markets on Friday.

That is indeed good news, though I thought the world probably overestimated the North Korean threat. Given the protagonists, its likely to be some meeting.  We can only hope Fox News runs it live. I’m sure they want to.

Diplomats were quick to caution the White House not to get over excited.  The Kims have a habit of bait and switch when it comes to this type of meet up.  I’d like to think there is someone in Kim’s entourage who has warned him that Trump is another loose cannon just like him. Getting cute with the meeting would not be a smart plan. 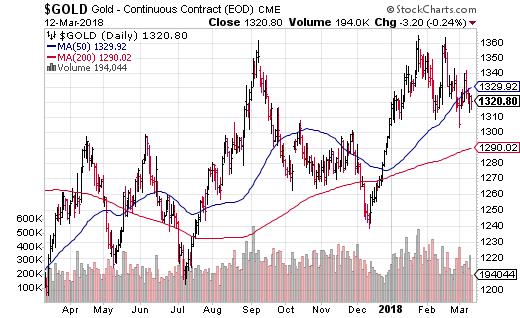 All this left gold pretty much where it was two weeks ago. There was a brief spike, but the ADP private payroll number squashed that before the government number had a chance to do it. Gold has risen slightly after a “payroll scare” as traders focused on the wage gain number, the one that mattered.

The next high impact number, this month’s US CPI reading, will hit the market right about the time you receive this issue. The consensus estimate is for a slight bump in the headline number to 2.2% and no change in the core (ex food and energy) rate at 1.8%.  That sounds about right, though I wouldn’t be surprised if the headline number didn’t go up.  Oil prices have a big impact on the headline number and oil didn’t have a great February.  Either way, it should not be a shocker unless one of the hard to estimate categories like medical expenses is a blow out.

All things considered, gold has held up ok in the face of what is again a very “risk on” market.  Everyone, me included, expects the US Fed to raise rates again later this month.  If bullion holds up until then and we get a relief rally afterwards, as we have after the last few increases, we’ll be in decent shape.

One trend to keep half an eye on is presented in the bottom chart on this page.  The “bid to cover” ratio during US government bond sales has been in a down trend for a while now.  This is a measure of bond demand, showing how many bids are made at US Treasury auctions for a given bond sale. 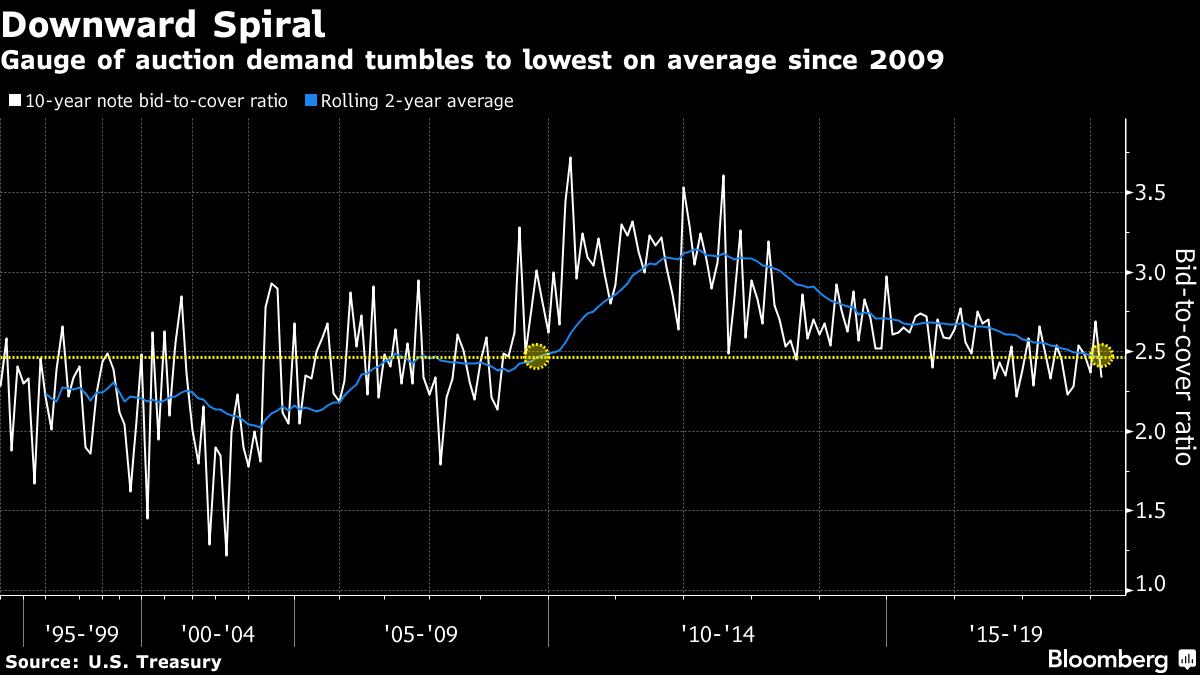 It’s been down for a while, so I’m not as worked up about it as Bloomberg, which created the chart, seems to be.  It’s worth watching though.  The US federal government just reported the largest monthly deficit -$215 billion—in six years that is only the first of many, many to come.  The US will need to ramp up Treasury auctions at the same time its increasing interest rates. That is a very unusual combination that will be hard for bond traders to adjust to

I’m not predicting disaster, but I think large fiscal and current account deficits have the potential to generate another structural bear market in the US Dollar.  That’s one reason I’m not currently worried about metals prices.