From the HRA Journal: Issue 288

Buckle up. We could have a smooth ride over the next few trading sessions, but that seems like an over-optimistic scenario. There are several market moving events that will determine the short and medium term trajectory of the precious metals markets and set the tone for the summer.

Based on recent history, we should be just ahead of the start of a gold rally but I'm not getting cocky until I see the actual Fed announcement since it's the rate hike trajectory after the expected increase next week that really matters.

The situation looks clearer and more positive on the base metal side of the market. The short-term spike in copper prices could get cut short by a resolution of labour disputes at the world's biggest copper mine but the longer-term trend is positive. The late cycle base metals market, governed by supply concerns, seems to have arrived for most base metals. There are plenty of active copper and zinc stories on the HRA list that should benefit from that market backdrop.

We just finished another successful Metals Investor Forum. If you couldn't attend you can still listen to all of the presentations and backstage interviews. You can find the newsletter writer and company presentation under the "video" tab at www.metalsinvestorforum.com and the backstage interviews on the MIF YouTube channel at.

Next week should be an important one for metals, and for precious metals, in particular. We've got a Fed meeting and an ECB meeting dead ahead. If (recent) history is any guide those meetings could have a big short-term impact on gold and other precious metals.

The chart at the bottom of the next page shows the one-year trace for gold prices. The three vertical bars indicate the dates that the US Federal Reserve raised interest rates. While I wouldn't say the predictive track record is perfect, gold did have sizeable rallies after rate increases. In the case of the last two rate hikes the rallies began almost immediately.

As this is a quarterly Fed meeting with press conference and dot plots, a rate hike next week is all but guaranteed. That is priced into gold and the $US too for that matter.

What will be important coming out of the meeting will be the press conference and dots plots. Traders will use those to update their view on how many more rate increases we may see through this year and next.

That is where things get tricky. I don't think the market has priced in four rate hikes this year. Four still isn't assured since PCE inflation hasn't been rising fast enough but it looks like the US will have a strong Q2, with growth perhaps well above 3%. Does the Fed signal its thinking of adding a fourth hike either through press conference comments or new dot plots?

With everything else going on out there-trade wars, North Korea, etc.-the Fed may not want to push things just yet. Central bankers aren't "supposed" to care about offshore stuff but I'm sure it gets factored in. FOMC Chairman Powell will be walking a fine line.

The final determinant may be the latest US CPI number which will be released the day before the Fed rate decision. Consensus estimates are for a small uptick in core CPI, less than 0.1%. Anything exceeding that could have bond traders hitting the sell button as they start pricing in a fourth rate hike this year. Conversely, another month of unchanged core CPI would, or should, have the Fed questioning the idea of a fourth rate hike this year. 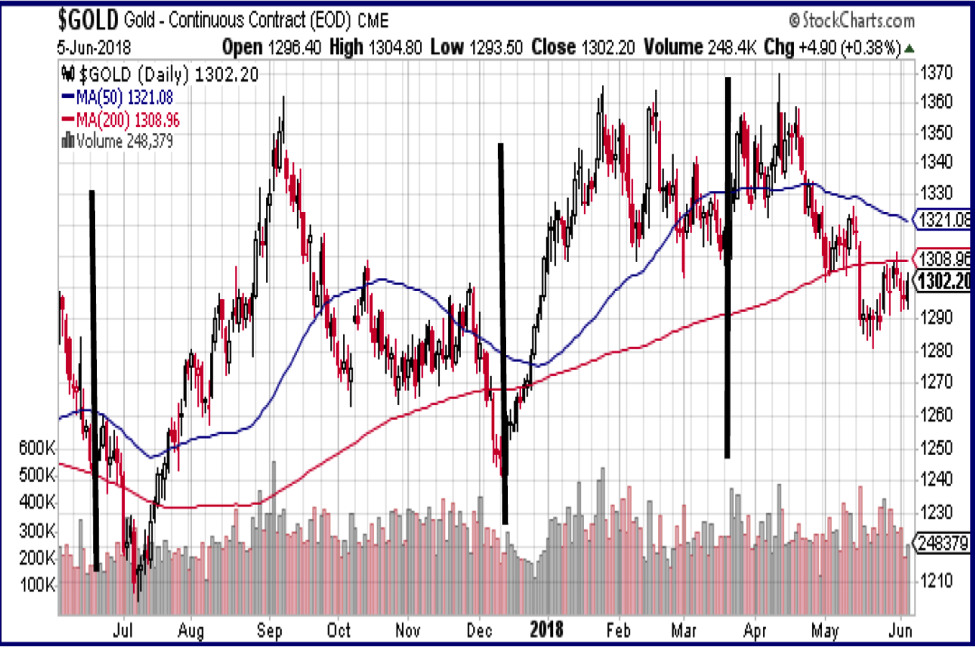 The perceived odds of four versus three rate hikes this year will determine if we see an immediate gold rally again. CPI readings will guide that early week but the wording of the Fed announcement and comments later are far more important to the market.

The US isn't the only venue for a central bank meeting this week. The ECB is meeting too. I don't think anyone expects a rate hike from that bunch, but the meeting could still have an impact.

A couple of ECB board members have been dropping hints about a formal announcement about the end of the ECB's bond buying program. That's been holding down rates across the EU for years.

It's very unpopular program with northern European countries who think the EU economy is strong enough to get off the QE drugs. Its their delegates that have been hinting Mario Draghi may announce the bond buying will start to be tapered late this year. That's slightly ahead of schedule.

Those comments, and some self-inflicted US political wounds, are largely responsible for the Euro having a strong bounce in the past two weeks that carried it three cents higher.

With continued weakened growth readings out of the EU, including Germany, its hard for me to imagine the ECB getting brave about QE. The dislocations all that bond buying is creating aren't healthy, but the recent growth trajectory in the EU is anything but positive. The political situation in Italy just makes the taper scenario even more unlikely right now.

Yes, there's a coalition government and a new Prime Minister. But one look at Italian sovereign bond markets or bank shares will tell you the market doesn't believe things are resolved. I think the bond traders are right. Draghi isn't likely to commit to anything until that situation calms down. 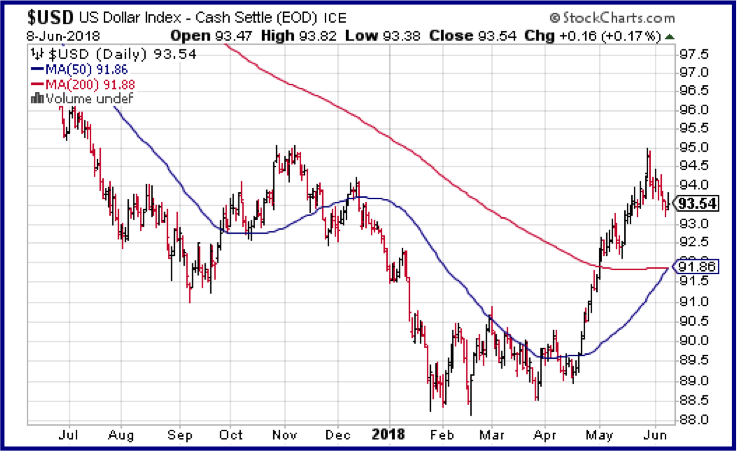 With the opposing forces aligned in the precious metals and currency markets right now we should be prepared for volatility. While recent history favors the idea of a gold rally starting in a few days we won't have much clarity until after the US CPI on Tuesday, the Fed meeting Wednesday and the ECB meeting Thursday. It might be a good idea to buckle up.

For that other currency, the green one, the Fed meeting will be the largest impact, with the addition of technical trading factor. Those, along with the Euro bounce, stalled out the USD advance right where it topped out in November. It was a sharp turn around as you can see from the chart on this page.

That might be only a temporary respite. A lot will depend on the hawkishness of the Fed statement, but the USD remains very overbought. Anything short of a four rate hikes message could still generate more USD weakness. Renewed belligerence on the trade front by the US won't help the USD either. We're not out of the woods until we see the Fed statement but more technical trading in the currency market could help the gold market.

Things have been much better on the base metal side of the market. Weaker European stats and the stronger USD haven't been impacting those markets. Base metals, more than gold, continue to respond to the late cycle narrative and their individual supply concerns.

Copper is the poster boy for the move as it so often is. The red metal has gained almost 10% in the past few weeks and is back near it's 52 week high. Much of that is due to strike fears at Escondita in Chile, the world's biggest copper mine. Management and the union are miles apart. 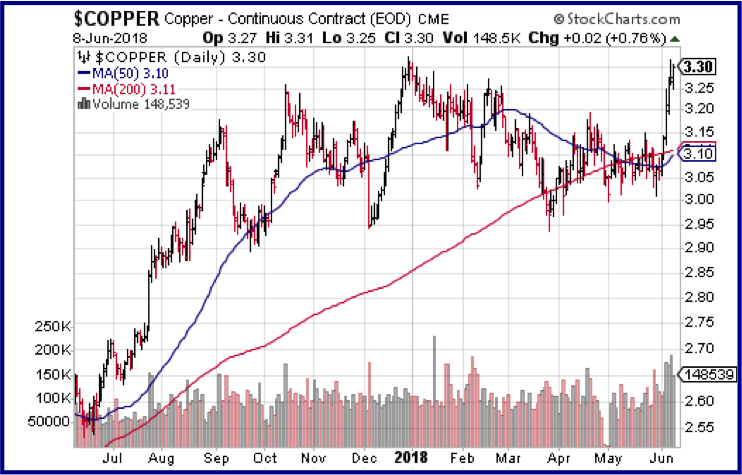 Markets tend to over-react to labour strife so I'm being cautious about the short-term move. But the underlying thesis of the copper market has strengthened as more traders come to realize we have the makings of a major shortfall in copper starting a year or two out.

The optimism has infected other base metals markets, with lead, zinc and nickel all at (at least) multi-month highs. Inflation or no, we seem to have the start of a classic late cycle move on the base metal side at least.

The good news in all this is that we have a good backdrop for base metal stocks to get good reactions to good news. We might have to wait a little longer on the gold side but a dovish sounding Fed or hawkish ECB, or both could kick off the party early.