The Other Shoe: Gold and the Fed Taper

From the September HRA Journal

Market action has been constructive but not instructive. While the explorers haven't seen much price movement volumes have improved for the better names and I am starting to see a little more life in the financing market.

As noted in the editorial, many traders are determined to hold off until they see if the US Fed starts tapering and they know how fast the bond buying will end. I think it starts this month. If the Fed is not going to keep buying ad infinitum I would rather see them start cutting back the bond buying now. Even if there is a down spike in metal prices that could draw in buyers that continue to sit on the side lines. Ultimately, the market needs the sort of volumes and financing activity that only comes when most traders think the bottom is in the rear view mirror. If that means the beginning of the end for QE needs to be announced, so be it.

Since the last issue gold and silver made some additional gains before giving up all the gains and then some as the threat of Syrian air strikes receded. The price is still holding above $1350 but the real test will come next week when we find out whether the Fed starts tapering QE at this month's meeting.

Economic stats in the US have been mixed but there have been more good ones than bad. The employment picture hasn't improved much-the August job report was actually pretty lousy. Surprisingly lousy given how many other economic readings like ISM numbers were quite strong.

It's possible the employment number was a fluky one though longer term issues-the quality of the jobs being created in particular-will remain even if the monthly job tally bounces back. There has been ongoing debate within the Fed (and elsewhere) about the labour participation rate in the US. It currently at decades lows and we don't know if that is structural or cyclical. If it's cyclical there is still a lot of slack in the employment market. This is important as it plays into the Fed unemployment targets for tapering and an eventual rise in interest rates.

The unemployment rate continues to fall in the US because people are "leaving" the job market, not because they are getting jobs. Some of this may be demographics-boomers retiring-but a lot is due to a drop in participation rates for women and for the 16-25 cohort.

I'm highly skeptical that it's all "demographic". I think you have women holding off on taking crappy jobs if the family can afford to avoid it and kids going to (or back to) school because the job market is still terrible. That opens the possibility of the unemployment rate stalling or even reversing if these people ever decide to reenter the market. I don't see how it's good news that we have this situation four years into an expansion.

Current weakness precious metals are blamed on Syria coming off the front pages. That's definitely part of it but I think many traders are pricing in tapering at the next Fed meeting too.

Gains in equities and reduced selling in the bond market followed the weak jobs report. Market optimism has been increased by much better economic readings out of China and the exit of Europe from its long recession. This helps explain weakness in the $US-which hasn't helped gold much-as the long Euro trade appears to be on again. 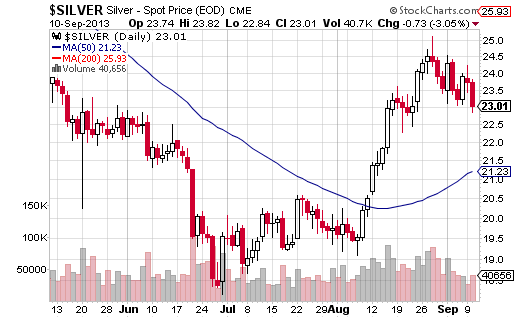 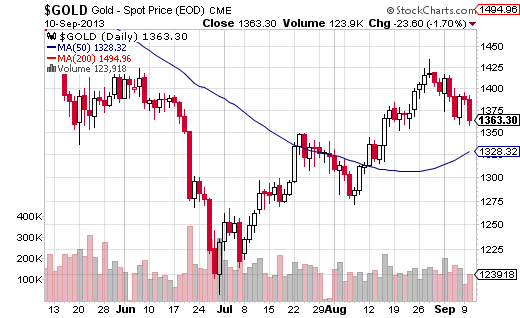 While that is "good" news I don't think it makes sense to trade on the assumption Fed tapering won't happen. I think it's coming and probably coming at the next meeting. If it doesn't happen this meeting it will just be a reprieve. It's better to be positioned to get a bonus from delayed tapering than to get a nasty surprise if the Fed sticks to the schedule. I don't think gains in the equity indices mean no one expects tapering. It can also mean more traders have decided an end to Fed bond buying is not going to have a big impact.

While the Fed insists that economic readings will guide the decision my expectations have a political side to them. The September meeting should be the last one before a new Fed chairperson is nominated. If Bernanke wants the start of the exit from QE to be on his watch he almost has to taper at the next meeting, even if it's only a nominal one.

The main contenders for Fed Chair are Lawrence Summers and Janet Yellin. Summers is well connected politically, close to Obama, and looks like the front runner now. Many outside of Washington and NY don't like him because he's viewed as "Wall St's candidate" and as the architect of financial deregulation that helped spark the housing bubble and debt crisis. I tend to agree with those critics-famous doesn't mean effective.

Yellin is vice-chair of the Fed now and has the best track record when it comes to forecasting the path of the economy. She is one of the more dovish Fed governors, but is because she correctly foresaw how tepid economic growth would be. If Yellin is nominated for Fed Chair I'm pretty sure the taper would be a slow one and might even be put off.

Summers is more hawkish on monetary policy. He's on record as a skeptic about QE in general and the latest round in particular. In fairness, there are many who think the current bond buying spree hasn't had much impact. While many view him as Wall St's guy many on Wall St don't share the opinion. If he is nominated there could be a big upward move in yields as traders anticipate a more hawkish Fed. That wouldn't do either gold prices or the S&P any favors.

While the majority of mainstream market players expect the taper to start this month gold bugs do not. Knee jerk selling could, ironically, come from gold's biggest supporters in the West. I don't think tapering would have any impact in China or India. It would be viewed as a sign things are improving economically. Since gold is an asset class and wealth store in that part of the world this would not be a negative. If gold and silver were hit hard I think these traditional buyers will step up again just as they did earlier this year.

If there is any good news here it's that a tapering decision would be viewed by many as the last obvious piece of bad news for precious metals. I know many traders are holding off until they see this "other shoe" drop. That doesn't mean we get a big bounce after a tapering related selloff but it could mean that financing becomes easier for better companies.

In the past 2-3 weeks there has been a definite increase in financing activity. It's still weak but placements in the $500k+ range are up quite a bit. There have even been a handful of bought deals for the first time in a year or more.

That is step one. Step two will require more liquidity, funds put to use and traders seeing companies getting positive reactions to news. After all that we might get a real rally in the explorers. We're not there yet but a start to tapering could at least get traders to stop obsessing about it and start reading news releases again.