Return of the Taper (Talk)

Well, that didn’t take long. No sooner had the resource market started showing faint signs of life than the talk of a near term cut back in QE reared its head again. That combined with weakness in the Euro generated renewed selling across the commodity space. Traders are again left to wonder “Do we EVER get out of this mess?!”

I am less worried about the medium term than I was a couple of months ago, for reasons I touch on later in this article. That doesn’t help much in the short term. Many are wondering again if June was indeed a long term bottom for the Juniors. Do we get beat up again going through tax-loss selling season or can we find a late year bottom higher than the summer doldrums?

The rapid cooling in the gold price owes much to renewed talk about a potential QE Taper in December. The talk stated when the last Fed meeting announcement excluded a sentence about credit market conditions having tightened (yes, traders read it that closely). That line was indeed missing but then it should have been. 10 year bond yields fell half a percent between meetings. An article in the New York Times by a correspondent with a reputed direct line to Bernanke included comments that a December taper couldn’t be ruled out—though it was data dependent. Gold fell a lot harder after this story than after the Fed announcement itself.

Added to the Fed drama was the release of CPI numbers in the Eurozone that indicate the EU is again tipping towards near deflation. The projected EU growth rate for 2014 was also lowered yet again. While things no longer seem to be getting worse the improvement has been marginal at best through the Eurozone.

This increased the odds the ECB will cut its benchmark interest rate in a few days. That had currency traders bailing on the Euro and trading back into the US Dollar. The Dollar came perilously close to a 52 week low before Euro selling and the Fed announcement generated a large bounce. That put paid to the rally in gold, metals, oil and the juniors, at least for now. The assumption that the ECB will cut rates seems broadly accepted in the market. If Draghi stands pat yet again we could see firming in the Euro and the gold price.

Both gold and the Venture Index have given up over half the gains they made after the Washington deal last month and volumes have been trending down again. This is obviously not what I was hoping to see.

A lot of this is due to continued “Taper Talk” which was what I feared earlier in the year. I noted a couple of months ago that traders will keep trying to second guess the Fed until it either announces a taper or leads them to believe it won’t happen for an extended period.

Believe me, there are plenty of things other than the timing of the QE taper I’d rather talk about but there is no denying this is the gold market’s fixation. Like it or not (and I don’t) we’re going to be handicapping this for a while.

Notwithstanding the market’s reaction to this month’s Fed announcement, recent speeches by Fed governors and regional Fed presidents seem more accommodative than they did two months ago. The government shutdown is a big part of that but perhaps not all of it. Several Fed members highlighted concerns that employment growth is weakening again in the US. A couple had surprisingly dour growth predictions for next year, expecting 2% growth, much lower than Wall St’s assumptions. I don’t think Fed committee members necessarily have better information than the public but they probably have it sooner.

The next couple of important data points are Q3 GDP growth and the October payroll number. Both of these are expected to be weak. Precious metal prices should get some relief from that. Unless broad economic measures turn down again or Janet Yellen decrees QE forever we may need to await a taper announcement to get a bottom on precious metals. Based on those recent Fed governor comments though I think the odds of QE well into 2014 are higher than they were a month ago. We’ll see.

Taper is the dominant theme in the futures trading pits but I still maintain that, longer term, metal prices will reflect physical supply and demand. Central bank moves will be important as these institutions have been a big swing factor in the market, moving from being sellers to buyers over the past few years. Most central banks haven’t changed their stance on gold reserves.

China’s growth has picked up and there is a major Plenum going on now is expected to lay out a strategy for transitioning the Chinese economy. More on that in the next issue but, in general, increased wealth in the East means more buying.

As far as supply goes, the chart below is one of the more instructive ones you’ll find. It tracks world mine production, gold discoveries and exploration budgets for the past 22 years.

I’ll say up front that I doubt the exploration budgets. I don’t believe the increases or the size shown for 2011-12. I suspect most of that is “brown field” exploration rather than true discovery work.

It’s not an inspiring chart. The big increases in discoveries in the 1990’s owed much to juniors going international and working in “new” areas like South America and Asia. Higher budgets after 2002 did generate new discoveries but not at the scale of the nineties, even with bigger budgets. Since 2009 the track record has been terrible, especially if you took the exploration budget figure at face value.

There are two very interesting aspects to this chart. Gold discoveries have trended down for years. There are fewer and fewer quality projects to grow overall gold production, or even keep it stable. You can see world gold production starting to trend down on the right side of the chart. Expect that to continue. 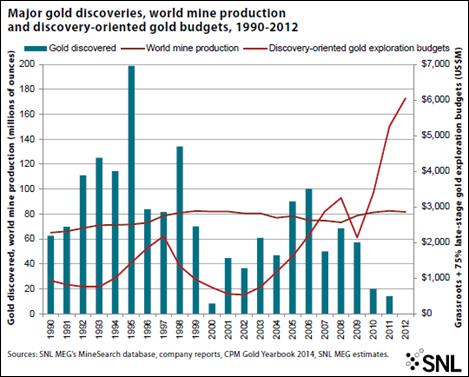 I can imagine many in the sector will shake their heads after reading that sentence but, from a market perspective, it makes total sense to me. Success begets success and when the market responds to discovery promoters try to supply it. This doesn’t provide much insight on market timing but does reiterate the point I have been making for months. To put it simply (too simply, really) “You want a better resource market? Go back to the field and look for one.”