From The June 2013 HRA Journal

Gold continues to struggle and so do explorers.  I am seeing encouragement in the trading of some discovery stories but this is a very small subset of the junior sector.

I think the precious metals markets are well set up for a rally but gold rallies don’t usually happen in the summer. It’s still possible but I don’t think a rally strong enough to drag the juniors along for the ride can be assumed in the short term.I will continue to focus on discovery and potential discovery stories. The lack of well-funded companies with targets I really like means I haven’t been adding new names to the list recently.   I don’t see that changing soon.   In a low liquidity bear market no one wants to get stuck with the wrong stock.  There are a handful of situations that look interesting but I’m waiting for the market to come to me. If that happens those of you on the SD list will hear about it first.

Most of the companies I have been concentrating on are either drilling or will be before the next issue is out.  That is where the rubber meets the road for this type of speculation.   We’ve had one work out and I’m hoping to see other successes before much longer.  The summer doldrums are almost upon us but companies that announce important discoveries will still get attention.

Markets just keep getting stranger.   Traders are obsessed with guessing when the US Fed will start to taper their QE program. This has been generating a lot of counterintuitive trading.

The US economy continues to post positive economic readings though it looks like things may be slowing a bit.

It’s clear market participants don’t think the US economy is strong enough yet to advance without prodding by the Federal Reserve.  Every comment by a member of the Fed Open Market Committee (voting or not) sends markets stampeding one way or another.  Volatility levels are high.  A lot of retail money recently entered the markets for the first time in years.   It will be interesting to see if the wild swings during the last couple of weeks are too hard on their nerves.

The overwhelming concerns about QE or no QE can be seen in the reaction to major economic readings through the last month.   In a “normal” market that has seen the sort of move the S&P 500 has the past few months any sort of negative or even contradictory economic reading would be a disaster.  That certainly hasn’t been the case lately.

The US employment report for May is a perfect example.  The US economy produced 175k jobs in May, slightly higher than the consensus estimate of 165K jobs.  Revisions to March and April data basically accounted for the amount above consensus.   Normally this would have produced a flat or down session in the markets as traders who bet on a strong reading exited.

Instead of that we got a huge rally in equities and a pummeling (again) for gold.  Most mainstream finance sites credited an employment report that “beat consensus” for the rally.  I think a widespread belief that the job gains would not be strong enough to convince the Fed to cut QE was the real reason stocks soared. 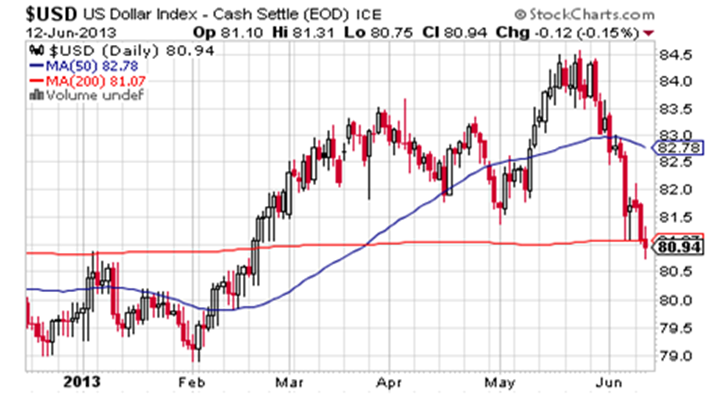 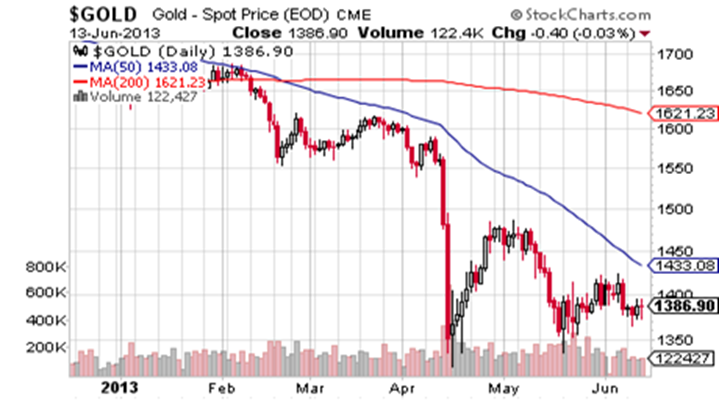 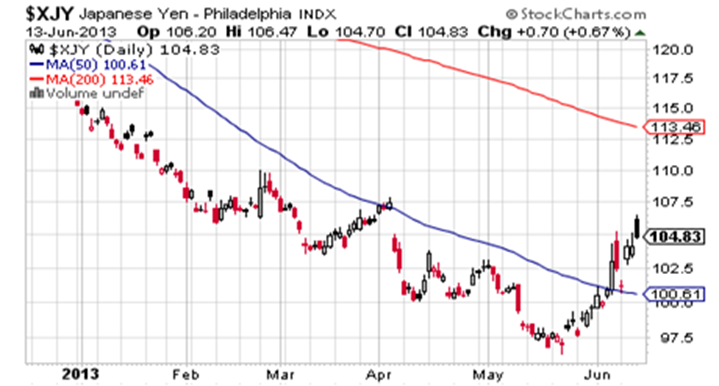 The charts above show recent action in the gold, $US and Yen markets.  Gold has continued to struggle, which is not comforting given the looks of the $USD chart.

The Dollar Index has put in what looks like an important top, losing 4% and dropping below its 200 day moving average.  At least some of this is due to the bounce in the Yen.  Traders closing Yen short/Dollar long positions certainly accounts for some of the move.  It’s also part of the reason precious metals have reacted so weakly to the Dollar move.

Another trade that may be affecting the Dollar is a move out of US Treasuries. It’s hardly a stampede but yields on 10 and 30 year treasuries have increased by a third (from a record low base, admittedly) in the past month or so.   This too is a reflection of traders betting on how and when the Fed exits QE.

I can’t read Bernanke’s mind any better than Wall St traders can but I’m not convinced he’s as close to pulling the trigger as many assume.   Swings in the markets are making the decision that much harder.   The Fed Open Market Committee is well aware of the impact this move will have.   They want to time it to ensure the change in QE buying does not become a self-fulfilling prophesy that crashes bond markets and takes Wall St down with it.

Based on comments by Bernanke he is looking for at least a 200k per month increase in employment for several months running.  We haven’t got that yet.  Job growth is still light and the jobs being created are mainly low quality ones.

Another important factor the Fed will consider is the lack of inflation.  The chart above shows the longer term trend in the Personal Consumption Index deflator, the Fed’s preferred inflation measure.  It’s at 1.1% (ex food and energy) and has been trending down since early 2011.

I’m not bearish on the US economy and would be shocked if the PCE went negative.  That said, I don’t see Bernanke risking it.   Deflation is VERY hard to get rid of if it gets entrenched.  Japan is throwing everything and the kitchen sink at the problem.    Inflation is fairly easy to beat when you have a zero interest rates.  You just jack rates up if you think inflation is trending up.  Deflation is a low probability outcome but one Bernanke would be unwilling to risk.

The Fed sets interest rates, but only some of them.  Treasury and LIBOR markets provide benchmarks for many loan types.  When QE ends the Fed will cease being a large buyer in the Treasury as well as some mortgage markets.  This could have a big impact, generating interest rate increases that will be damaging if they are timed wrong.  QE will end, but perhaps not as fast as some fear.

None of this will help the gold market unless the Fed announced firmly that QE will continue.  Gold has managed to hold its price range but hasn’t been able to rally convincingly.   Recent moves by the Indian government to make gold buying more expensive has put a dent in gold demand.  It’s too early to say if that drop is permanent but it’s not helping.  Given corruption and incompetence in the Indian financial sector it’s hardly surprising many Indians prefer to hold gold.

I still think the gold market is set up for a rally but will continue to focus on discovery stories until that rally arrives.

Eric Coffin, editor of HRA Advisories, recently sat down with President and CEO of Colorado Resources, Adam Travis, to discuss more about the company, its recent successes and why investors should stay tuned to this story. Click here to download Eric’s interview with Colorado Resources now!

We think there will be more discovery winners but it's still a "show me" market. HRA understands that which is why we are offering you a chance to try out HRA for three months for only $10.00!

The HRA – Journal, HRA-Dispatch and HRA- Special Delivery are independent publications produced and distributed by Stockwork Consulting Ltd, which is committed to providing timely and factual analysis of junior mining, resource, and other venture capital companies.  Companies are chosen on the basis of a speculative potential for significant upside gains resulting from asset-based expansion.  These are generally high-risk securities, and opinions contained herein are time and market sensitive.  No statement or expression of opinion, or any other matter herein, directly or indirectly, is an offer, solicitation or recommendation to buy or sell any securities mentioned.  While we believe all sources of information to be factual and reliable we in no way represent or guarantee the accuracy thereof, nor of the statements made herein.  We do not receive or request compensation in any form in order to feature companies in these publications.  We may, or may not, own securities and/or options to acquire securities of the companies mentioned herein. This document is protected by the copyright laws of Canada and the U.S. and may not be reproduced in any form for other than for personal use without the prior written consent of the publisher.  This document may be quoted, in context, provided proper credit is given.