Even in a crappy market year-and this has been all that and a bag of chips for resource stocks-traders tend get relief heading into year end.

Ever optimists, equity traders start looking for things to buy (bet on) as the year winds down. Cheap or free booze widely available at company and private holiday gatherings doesn't hurt either. That's what a normal year looks like. 2013 has been anything but normal.

Buying positions for the New Year often creates a "Santa Claus Rally". Speculative markets, being more susceptible to "animal spirits", are often strong from Christmas through Q1. Winter drill programs funded by year end flow-through placements add to the sense of potential early in the year.

As this is written there is still some tax loss selling going on but its lightening as are overall volumes in the resource space. Companies with the steepest share price declines that have liquidity may have to deal with this selling for another week or so but big tax loss sellers are done.

Santa hasn't arrived though and markets still need to contend with a potential Fed taper. US economic readings have been decent this month and every strong reading increases the near term odds of the Fed cutting its bond purchases. The idea that the Fed could start cutting QE this month has been growing.

A taper decision this month won't surprise me, even though December is a strange time for a change of direction from the Fed. I can't see why the Fed wouldn't do it though.

Market reaction to "good" news has shifted from selling to buying. This reflects an increasing sense that the Fed can manage the transition, or at least less fear the taper will be some sort of disaster. New York was priced to perfection with investor sentiment so bullish a correction is overdue anyway. As long as a taper induced sell off didn't get out of control I don't see why fear of an equity market dip should dissuade the Fed.

Expectations of tapering soon increased when Washington announced a budget accord. The fact a two year budget deal that lame even gets agreed on shows you how little stomach there is for another government shutdown. The debt ceiling vote next month now looks like a non-issue.

Some in the market are taking the budget accord as the final piece of the puzzle and they might be right. There is no doubt the autumn budget impasse was one of the main reasons tapering didn't start in September.

The market is as prepared as its going to be. If positive data keeps coming there shouldn't be too big a panic over a cut in bond purchases now. Even if tapering generated a bigger correction on the S&P traders could live with it. A correction now reduces the odds of something a lot nastier down the road. 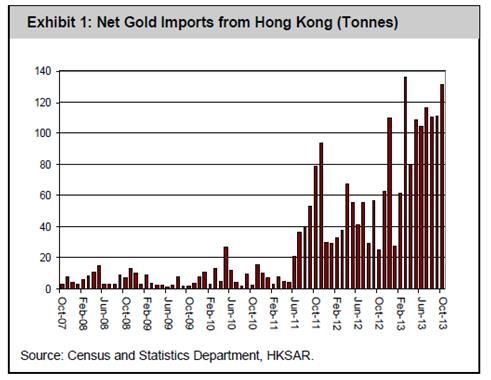 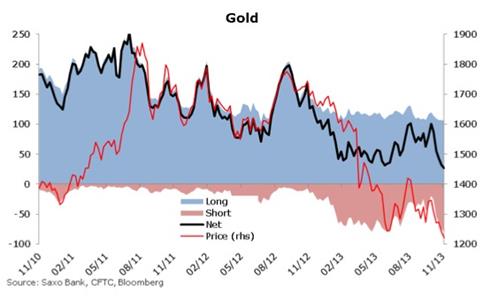 The top chart shows monthly gold imports to China through Hong Kong. Gold buying in China has remained stronger for longer than just about anyone expected. October was the second biggest import month ever. China buys more whenever the price drops so November should be another big month.

The lower chart shows the long (blue shading) short (red shading) and net position (black line) for the Comex gold market. A couple of things should jump out at you. One is that the net long position is about as small as it's ever been. More interesting is who is short. Large merchants/producers that hedge to lock future price levels are always net short. Except now.

Comex is a hedging facility for large producers and merchants. We expect them to be short. The only reason these large players would reverse their usual market stance is that they expect higher prices, near term.

The current short position is dominated by speculative traders and hedge funds. Hedge funds are trend followers-they are selling because others are selling. It's not good to see large sellers in the market but if they have to be there is nice it's a group that has been wrong so regularly.

The question now is, why are these traders so short? I think there are two reasons. One reason is fear of disinflation. That reason I can appreciate. I've been concerned about disinflation for some time. Frankly, if the Fed keeps QE going it will be due to fear of deflation, whatever official reason is given.

The only way to reverse the disinflationary trend is to increase confidence, economic activity and bank lending that grows the money supply.

Ironically, the Fed cutting QE could increase the money supply if it gives banks and borrowers the confidence to increase lending. That sounds counterintuitive but isn't if you understand the monetary transmission mechanisms. I'll go into that at more length in the next issue.

The most recent surge in short positions is traders betting on a Fed taper. You can see the net long positioning in the gold market dropping like a stone the past few weeks. Not good, but remember that like any trade the profits aren't made until the trade is closed.

Let's assume the Fed cuts bond purchases this month. There would be knee jerk selling, maybe a lot of it, but there will also be traders already short looking to close positions. Some of those traders might double down but I think most won't. The biggest market reaction should be to the initial taper announcement.

Traders will be trying to use a drop in prices to close shorts. If there isn't a big downside in price they'll want out even more badly. I think part of the reason gold reacted better than expected the past few sessions is that traders are nervous about how much company they have on the short side. Ugly though the price is, the gold market is well set up for a bounce whatever the Fed does. Maybe it's not too late for Santa.