The graph below for Virginia Gold Mines shows what a win it’s been for HRA readers.  We’ve added some earlier comments on Virginia to show how it was followed as events developed. It’ s been successful in the long term for Journal readers and an even more explosive short term win for Special Delivery and Dispatch subscribers. 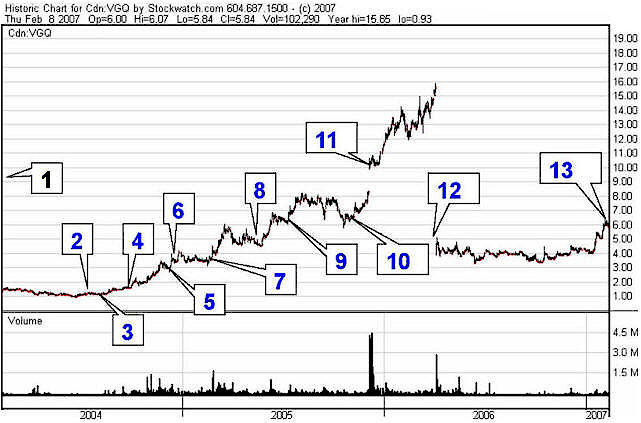 1. Virginia was originally reviewed in the Journal in 1999 at $0.65 (a rare “bear market” addition) thanks to its broad range of projects and management with excellent exploration, funding and deal making skills. VIA went from accumulate to hold as the price moved to $2.00 on base metal discoveries then eased back in price but the best was yet to come.

2. Special Delivery #202 - August 2004.  Virginia releases the first set of trenching results from the Eleonore project and we declare  “The trenching results already have the feel of a starter pit to them” - moved back to spec buy at $1.15

3. Special Delivery #205 – September 2004.  VIA releases the first drill results from Eleonore.  On viewing those results we said “VIA closed at a multi - month high and the 52 week high of $1.90 won’t be far behind if they keep releasing results like these… VIA management had spent years looking for just this type of situation.  Most of you should have a good gain on this one already but there is definitely a lot more upside in this stock.”

4. Special Delivery #207 - October 2004.  Trading at $2.05, VIA releases its second set of drill holes.  We maintain the Spec Buy rating with the comment that “continued results like this will confirm what we already suspect - that this is one of the best finds in the Canadian Shield in a long time”.

5. Special Delivery #208 - November 2004. VIA releases another large set of drill results, expanding the “Roberto” zone and including a number of intersections of the new, parallel “Roberto Est” zone. HRA states that VIA, trading at $2.27 “has reached a tipping point that can draw in new spec buying and drive to stock to higher levels on volume” as the rating is raised to Strong Spec Buy again.

6. Special Delivery  #213 - December 2004.  Now trading at the $3.50 level, another large set of drill results expands the Roberto zones yet again.  HRA presciently declares “Virginia’s all-time high is $4.10 reached in the heady market of 1996.  We think that with the results in hand, Virginia is positioned to exceed that high”.

7. Special Delivery #225 - February 2005.  Virginia traded sideways for two and a half months  and was trading at $3.88 when it released a large set of new drill holes. HRA rushed out an alert telling readers we considered the results highly significant.  We ended that alert with the statement “...in short, these holes have opened up the expansion potential of Eleonore in all directions.  We continue to view Roberto as one of the best finds this cycle and maintain the Spec Buy rating”.  The stock never looked back.

8. HRA releases a large update in Special Delivery #234 in May after David visits the project.  We re-iterate that we consider it the find of the cycle in Canada and congratulate the management and staff of Virginia for not only making the find but also advancing it so quickly.

9. Special Delivery #237 - June 2005.  We release another alert with VIA trading at $6.20 as the deepest drill holes yet return spectacular grades and trenching discovers new areas of gold mineralization.  We state in the alert that “this release expands the “envelope of potential” at Eleonore through the 5 million ounce level” and that “VIA is technically a 10-bagger from our earliest call some years back but we are now looking at it as a potential 10-bagger from our early call on Eleonore last summer (at $1.15)”.

10. Special Delivery #251. We continue to follow VIA closely, pointing out buy points during periods of weakness.  It’s still a Spec Buy on our list in November when we state “we expect VIA will ultimately be taken over for a considerably higher price than the one prevailing today.”

11. Special Delivery #254. We released a Special Delivery on December 5, 2005 after Virginia, as we had predicted for over a year, was the subject of a friendly takeover offer by Goldcorp (G-T, GG-N).  After reviewing the bid we recommended VIA shareholders hold their shares (or acquire some) through the meeting and approval process so they could hold shares in “New Virginia” which would hold all the non Eleonore assets of Virginia.

13. March 29, 2006 – Virginia shareholders overwhelmingly approve the Goldcorp transaction.  VIA shareholders will received Goldcorp stock worth about $15.50 per share plus a half share of New Virginia.  At the time of writing, VGQ is trading at $6.00, or $3.00 per original VIA share.  This represents an overall gain of almost 3000% from the original Journal addition and 1650% (in 20 months) from Special Delivery Alert #202!

Shouldn't you be getting these kinds of gains?