Just when you thought it was safe to go back into the market the gold price and junior resource stocks drop and nervous traders declare the sky is falling yet again.

I’m not thrilled by the market action of the past two or three weeks but I also don’t think the basic narrative has changed.   The gold price has corrected but I don’t think its rolled over unless it gets quite a bit lower.  Likewise, the correction in the Venture Index is not large compared to some of its larger brethren and well within the bounds of what one would see as part of a larger bullish advance.

It’s still very quiet on the news front and this is one issue that needs repair before a strong bull run develops.  Most companies just raised money so it will take time for them to start reporting from the field.  That will help carry things forward and new discoveries and new ideas will help even more.

Most of what I’m seeing is still recycled.  I think traders want some new ideas and the companies that deliver those can generate the sorts of gains that remind traders why they play resource stocks.  I think they will come but first we need to see a renewed advance that calms down investors.  Brokers and traders need to see more green on their screens before they are willing to pay up for untested ideas but I think that day is coming soon.

Did I mention I hate geopolitical gold price spikes?  I believe I did.  I made that comment in the last issue that was released just after a Crimean referendum that generated a wholly predictable result.

Gold topped immediately afterwards and continued to fall for the next two weeks notching a cumulative loss of over $100 before finding support around $1280.  This has gold bugs and resource stock traders back into a (so far) mild panic.  The question is whether metals and the producer and explorer stocks can get some near term traction and continue their advance.

I expected a pullback after the Crimean vote but was surprised by the strength of it.  The political situation seemed co clear cut to me that I couldn’t convince myself that there was that much gold buying based on the Ukraine.  Apparently there was.  It’s mindboggling to me that traders who paid the slightest attention to the doings of Vladimir Putin in the past 15 years expected any other outcome.  Things are still tense in the Ukraine but I expect it to fade as an above the fold political story.

Russia will probably complete an annexation in everything but name over the coming weeks and months.  As long as Putin has total control of the logistical routes in and out of the Crimea I doubt he cares what the name on the map is. This was about winning and, so far, he’s won.

Where there may be tension is other eastern European states that want to continue to move away from Russia.  Will the EU and NATO back them up or will Putin be allowed to strong arm them too?  I hope for the former but political cynicism makes me fear the latter.

Of course the Ukraine was only half the story.  Fed chair Janet Yellen had her own impact on the markets since the last issue.  Off the cuff comments during the post Fed meeting news conference freaked out the markets and tanked the gold price.  Here again, I find it a bit crazy that traders are still reacting to potential changes in QE taper and interest rate increases.  Yellen has made it abundantly clear that decisions will be based on economic readings.  She seems to understand better than Wall St that some of the improvement in the employment situation is statistical sleight of hand.  The unemployment rate has dropped as much or more due to declining participation as new jobs. 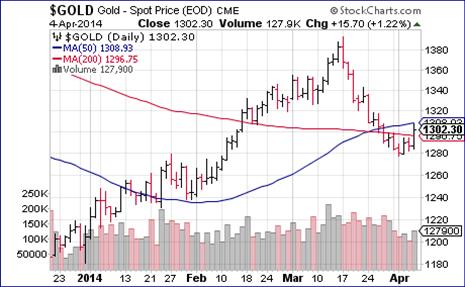 That’s not to say my thoughts about the taper have changed.  I think it’s baked in the cake that we get $10 billion monthly reductions until its unwound. There would have to be an enormous change in the readings to alter it and I don’t see that happening.  Most of the blather surrounding Fed meetings is less important than Wall St is trying to make it out to be.

The combined effects of Fedspeak and the Ukraine are amply demonstrated in the above gold chart.  Bullion fell all the way back to $1280 before finding recent support a popping back above $1300.

While I’m comfortable the longer term uptrend is in place it’s important that gold hold current levels.  US retail gold traders are spooked but that can change quickly if a new uptrend is established, especially if NY markets are weakening at the same time.

I noted in a recent Special Delivery that physical demand in China has been more resilient than expected, with demand in the first two months of 2014 up 40% year over year.  The real shift in Chinese demand came after the gold price plummeted last March.  We need a couple of more monthly data points to convince skeptics.  Those skeptics pointed to gold prices on the Shanghai market losing the premium to western prices but that moderated in the past few sessions. Large volumes of gold being imported by China should make the Shanghai market more liquid and naturally reduce divergence between prices on other markets.  It may be that too much is getting read into falling premiums anyway.

The chart below displays the Venture Index from the start of the year.  We may have put in another bottom a few sessions ago, before the gold price itself.  I take that as a positive sign though I’d still like to see more volume.  If this does turn out to be an interim bottom it would be pretty mild compared to the normal post-PDAC drop.  That again would be a positive sign for the market through the rest of the year. 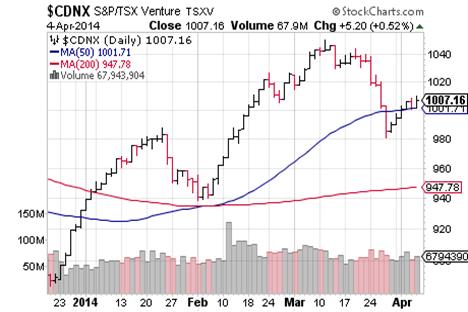 Base metals stabilized before gold thanks in part to a mini stimulus package announced by Beijing.  Both copper and iron ore have seen nice bounces but both are also slated to go into surplus later this year regardless.

Copper wouldn’t need much supply disruption to bounce higher but my comments about potential for sales of metal used as loan collateral remain.  I’m more positive than I was a couple of weeks ago but still cautious.  The good news so far is there is little sign of panic in the Chinese market.  Short term interest rates have dropped again recently and there has been a lot of rotation into emerging markets, both debt and equity.  Much of this is hot money that can turn on a dime but it’s not matching up to the Wall Street narrative.

NY markets saw new highs again but things have looked shakier in the past few sessions.  The selling is concentrated in the momentum sectors that helped drive those markets to records in the first place.  That is not a bad thing. Even bulls were getting nervous about how high prices were getting.

The big danger is that momentum stocks overshoot to the downside when they roll over.  It’s too early to tell but if selling accelerates we could get our 10% plus correction in a hurry.

Junior stocks can withstand weakening major markets if the gold price keeps moving up and the selling is not too abrupt.  Resource stocks at least have the advantage of being undervalued.

Even with calm markets and a higher gold price, juniors desperately need news flow.  That takes money.  February was better for fund raising on the Venture (35% year over year and 120% above January) but things cooled off some recently.  The improvement was even better on the main TSX board (58% yoy for Q1, much of that resource issuers).

The financing window is still open a crack and a couple of weeks of decent junior markets would allow for more placements.  That will give companies the means to start generating meaningful news again.  For the new bull market to stay and grow we’ll need news flow. Stay tuned for companies putting new money to work and looking for new audience.