There May Be A Test Later

From the May 2013 HRA Dispatch

Since the price dive in April, gold fought its way back to $1480 before succumbing to renewed selling as general equity indices rallied and the US Dollar took off.   It has traded back close to, but above, it’s April low before regaining some traction.  As this was written gold is trading in the $1380 range.

As long as gold can continue to gain the recent trading activity has the look of a double bottom.   This is a strong technical formation, but it won’t be considered confirmed unless gold manages to get back above its late April/early May high.  This may not be easy as we enter the traditionally weak period for physical demand but there are other factors at work.

As noted in the last issue, recent market activity for gold has been the story of ETF selling and physical buying.   For all the breathless angst by mainstream journalists, the physical market has actually been absorbing selling by gold ETF holders.   Nice though it is to have ETF buying adding to tailwinds during bullish periods there is little doubt that owners of GLD and other exchange traded bullion funds are the “weak hands” of the bullion market.

I still view the contrarian indicators as being supportive.  It’s impressive how negative they remain, with most indicators still showing, literally, zero positive sentiment.   This too is reflected in mainstream media coverage.  This is also 100% negative, at least the mainstream financial sites I look at.

The same is also true of brokerage house coverage, with few exceptions.   I find it interesting that so many market strategists that completely missed the gold bull market – gold is about the most successful asset class this century – suddenly feel the pressing need to have an opinion about gold.   If they didn’t know it was going to go up 600% you should wonder how they are suddenly experts on what it will do next.

The negative mainstream journalists have been pointing out, correctly, that we are entering the weak seasonal period for physical gold demand.   Buying out of China and India has been heavy and there has been support from some central banks.  April-May is usually a good demand period but things get much slower through the summer before entering the strongest period of the year in the fall.

Gold’s near term performance will also depend on if and when selling in the ETF paper market slows. That in turn will depend on how other markets are doing.  The charts on the following page show recent price action for gold and the US Dollar.  There is little doubt that the second bottom in gold related to the incredible strength of the $US through most of May.

HRA has been telling subscribers for months that new discoveries would be a key driver for a turnaround in the junior resource market. At the same time, we have been suggesting a handful of well-financed juniors with discovery potential. And in most cases, HRA is the only publication following them.

One of those HRA focused companies, Colorado Resources, recently became a big winner for subscribers. HRA began coverage of CXO at $0.20 back in October 2012, specifically for upcoming drill programs in NW British Columbia. Since then, the stock has hit a high of $1.74 thanks to a discovery on one of those projects. HRA subscribers have seen gains of over 750% in seven months!

In recent sessions the Dollar has reached at least a short term top.  This is due to some strength in the Yen, slightly better news from Europe and concerns that the US Fed would start tapering QE soon.   It’s a bit odd that fear of the Fed cutting QE would lead to Dollar weakness.  One would expect a currency to strengthen if there was risk that monetary expansion would slow and interest rates rise.  It’s a measure of how unusual this market is that a potential end to QE would weaken the greenback.  The very high volatility in the Dollar market also indicates traders with warring views. 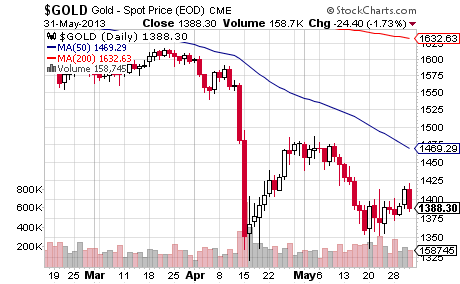 Bernanke’s Congressional testimony last week was a bravura performance, just the sort that gives central bankers their aura of omniscience.   He managed to tell basically everyone listening what they wanted to hear without saying much of anything, really.  The confusion he managed to create was obvious, with most markets swinging a percent or more in both directions in a matter of minutes. 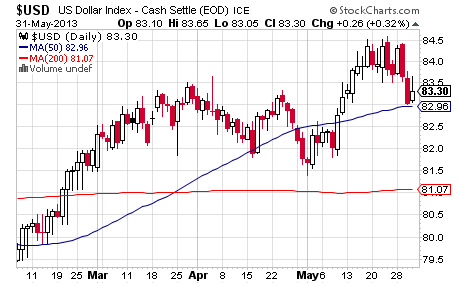 The consensus view was that Bernanke said he plans to cut back on QE within a few months at most.  That might be the case but that wasn’t what I heard.  He sounded more reticent to me.  Part of that is that the economy, particularly employment which is still not meeting the conditions he has set out for ending QE.

I’m not bearish on the US economy.  I expect it to do better than most.  For that reason I don’t want to be too optimistic about Fed money printing.  That said, it’s no secret what will happen to US interest rates if the Fed is not constantly pushing bond yields down with QE buying.

10 year Treasury yields have gone up half a percent since early May.  If the Fed were to announce a large cutback in bond buying yields could go even higher, and fast.  Equity markets would get slaughtered in that scenario which could hurt consumer sentiment that the Fed has worked so hard to improve.   It wouldn’t do the US housing market any favors either. The Fed WILL have to stop the bond buying at some point but I think Bernanke is more hesitant than some assume.

A second but related reason I think Bernanke will be cautious is inflation levels.   The third chart on the previous page displays values for the Personal Consumption Expenditures (PCE) deflator index, which is the preferred inflation measure for the US Fed.  The yellow line is the full index and the green line is the less volatile version that has had price changes for food and energy removed.

The PCE index has been trending lower since early 2012.  It is now sitting at about 1% year-over-year change, half the range that the Fed board indicates is its comfort zone. This is the lowest level since this measure started being calculated in 1959. However optimistic consumers might be this measure shows how much slack there still is in the US economy.

Remember that Bernanke’s academic background is as a Depression scholar.   He has a long held opinion that central bankers in the 1930s made the situation much worse than it needed to be by tightening monetary conditions at exactly the wrong time.  He has commented on this many times in the past few years.  Bernanke has made it clear he has no intention of repeating the mistakes of the 1930s.

Many that worry about QE triggering higher inflation readings and that possibility is real, eventually.   I can assure you that if Bernanke is lying awake nights worrying, its deflation that’s on his mind right now.  With interest rates at zero, the Fed has plenty of ammunition to defeat an inflation spike but deflation is much, much harder to reverse.  Just look at Japan.  Japan’s central bank is planning to double the monetary base in an attempt to get out of a deflationary spiral that has been going on for fifteen years.   We all know how Japan’s economy has performed during that period.

As I said, I’m relatively bullish about the US economy so I’m not assuming disinflation will become outright deflation but the possibility can’t be ruled out.  As long as that is the case I think Bernanke keeps the printing presses going.   He might slow the rate of QE but I don’t see it ending until PCE has established a firm upward trend.

Market worries about QE ending may put at least a short term top on major US indices.  These markets have had a very long one way run.  It would be perfectly reasonable for them to correct a bit.   That sort of market action might make gold ETF holders less likely to sell out.   Recent volatility in equities seems to have slowed ETF sales to a trickle. If that trend continues it will be supportive of gold prices during the coming weak physical demand period.

Although gold’s move from its second bottom is hardly the stuff of legend gold miners have been showing some relative strength lately.   This could be just another blip but it’s an encouraging sign. Those that wanted out of these stocks are gone and the sector could generate a good rally on any real price strength for bullion.

The juniors are faring a bit better with stronger bids on shares of companies that are actually planning to work on projects this summer.  Nothing spectacular here either but also encouraging.   I still expect the summer to have a positive tone though that heavily depends on a few explorers continuing to deliver good news.

The explorer holding everyone’s attention, Colorado Resources, is updated below.  In addition, I have appended a transcript of an interview I recently did with Colorado CEO Adam Travis.   Its good background and well worth reading and also part of the reason this Dispatch is a little late and very long.  CXO has a very strong technical management group that are both well respected and well liked through the industry.  Only time will tell if North ROK is a major discovery but it’s already roused the animal spirits on the Venture exchange.  However things end for North ROK it’s nice to see the good guys win one for a change.

Eric Coffin, editor of HRA Advisories, recently sat down with President and CEO of Colorado Resources, Adam Travis, to discuss more about the company, its recent successes and why investors should stay tuned to this story. Click here to download Eric’s interview with Colorado Resources now!

We think there will be more discovery winners but it's still a "show me" market. HRA understands that which is why we are offering you a chance to try out HRA for three months for only $10.00!

The HRA – Journal, HRA-Dispatch and HRA- Special Delivery are independent publications produced and distributed by Stockwork Consulting Ltd, which is committed to providing timely and factual analysis of junior mining, resource, and other venture capital companies.  Companies are chosen on the basis of a speculative potential for significant upside gains resulting from asset-based expansion.  These are generally high-risk securities, and opinions contained herein are time and market sensitive.  No statement or expression of opinion, or any other matter herein, directly or indirectly, is an offer, solicitation or recommendation to buy or sell any securities mentioned.  While we believe all sources of information to be factual and reliable we in no way represent or guarantee the accuracy thereof, nor of the statements made herein.  We do not receive or request compensation in any form in order to feature companies in these publications.  We may, or may not, own securities and/or options to acquire securities of the companies mentioned herein. This document is protected by the copyright laws of Canada and the U.S. and may not be reproduced in any form for other than for personal use without the prior written consent of the publisher.  This document may be quoted, in context, provided proper credit is given.