The Premium Service Level of HRA

The HRA Special Delivery ("SD") is an Alert service for our subscribers. Like any Alert service, it's event driven. There is no publishing "schedule" because SD timing is based on events like major market turns or important trend changing news from companies that HRA follows. Most companies followed by HRA appear in an SD Alert first and there are always several companies that are only followed at that level.

SD subscribers have received 30-40 Alerts per year since the service was initiated. Because there is no set schedule you might not see a SD for a month then receive 2-3 Alerts in the space of a couple of days. It's completely dependent on news flow. HRA does send out Alerts which update a number of SD level companies when there isn't a major news item but the real purpose of the SD is to deal with game changing events. When HRA spots a new discovery or an unnoticed situation or trend changing results on an existing HRA list company, SD subscribers hear about it first.

This is where Eric's extensive industry experience really shows. When important new results arrive that can fundamentally change the way the market values a company, HRA analyses it, decides if it will generate a trading opportunity, then lets SD subscribers know about it and if we think it's worth your attention.

SD subscribers get Alerts with actionable discussion of the news, information they can use to trade more effectively and profitably.

Readers who know how to trade can pay for an annual subscription many times over off a single Alert. It's not for everyone, but if you are a trader or high net worth investor, it's invaluable. Of course, a Special Delivery subscription also includes the HRA Journal so you will be getting Journal issues twice a month in addition to SD Alerts.

Look at the examples below to see how the HRA Special Delivery helped generate some recent profitable trades for its readers:

GoldQuest Mining (GQC) is a company that HRA has followed for several years. It made a discovery soon after coverage was initiated, leading to a 500% increase in the share price and a profit taking call. We kept it on the list because management had a successful track record in the Dominican Republic. We especially liked GQC's holdings in the Tireo volcanic belt. Goldquest is the original explorer in this belt and is responsible for its current prominence.

We suggested accumulation at the sub 10 cent level in SD #481 (point 1 on the GQC chart) because we expected good drill results from the program testing the Las Tres Palmas project. In May 2012, GQC far exceeded everyone's expectations when they released a spectacular discovery hole at the Romero area after market hours. HRA immediately moved GQC, which hadclosed that day at 7.5 cents, to Strong Spec Buy in SD #484, which was exclusively about the new discovery (point 2 on the chart). HRA was soon joined by many other analysts as Goldquest continued to release spectacular results. With the stock trading at 12 times its pre-discovery price in July 2012, HRA suggested locking in some profits (point 3 on the chart) though more good results were expected. GQC continued to release impressive drill results, ultimately finding the edges of the Romero zone and there have been many more SD updates to keep subscribers informed. The company now has $15 million to work with and continues to drill test new targets at Las Tres Palmas. It's still on the HRA list and trading at 6 times the pre-discovery price (as of August 2013). 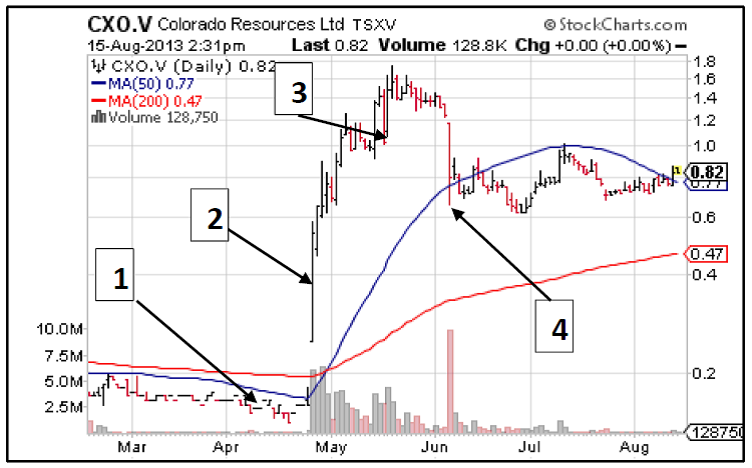 Colorado Resources (CXO-V) had been recommended several times through late 2012 and early 2013. We liked the targets in NW BC especially and liked the fact that CXO has a strong technical management team with plenty of exploration experience. We also liked that it was trading at cash value so there was little downside risk. We stepped up the accumulation call in SD #513 in mid-April 2013 (point 1 on the CXO chart) when Colorado announced drilling had begun on its Iskut area copper-gold porphyry targets.

That call turned out to be very timely. Only 10 days later, CXO announced a discovery drill hole on its North ROK project. SD #515 (point 2 on the CXO chart) was rushed out to our SD subscribers as trading resumed. CXO was moved to Strong Spec Buy on the basis of this new discovery. CXO rose strongly until a drill update (without assays) spooked traders and the stock dropped 30% in a day. We suggested it was a safe accumulate at that level in SD #516 (point 3 on the chart) though some profit taking was suggested soon after when the stock bounced almost immediately to new highs. A month later CXO released follow-up drill results that were good but not good enough for skittish traders. The stock sold down to the $0.60 range which we again noted as a good accumulation level in SD #518. As this page was written (mid-August 2013) CXO was back drilling and trading in the mid $0.80 range, 500% higher than the level HRA recommended accumulation at only four months earlier. Time will tell how the drilling works out but SD subscribers have already pocketed large profits, come what may.