Legends of the Fall

New highs for New York and even more new highs across the junior resource space.  We haven't gotten to September yet and we already seem to be staring the Autumn lift off.  It’s nice to be in the sector the rest of the market is jealous of for a change.

The Venture is currently one of the world’s best performing indexes, perhaps THE best performing.  That move continues to be dominated by gold explorers that have captured the attention of traders.  It’s been five years, at least, since I have seen the levels of anticipatory buying we’re getting for some stocks.  That is a great place to be if you’re already in.  That is why HRA keeps looking for situations where the crowd hasn’t arrived yet.

You should get an email in the next couple of days with your invitation to the next Subscribers Investment Summit.  It takes place on October 11 in Vancouver at the Pan Pacific Hotel.  As always there will be a great line up of companies invited by Keith Schaefer, Tommy Humphreys and myself as well as a couple guest speakers.

Keep in mind that SIS filled up and the RSVP list got closed when it was a bear market.   I can only imagine how fast it fills up during a bull market. This is your early warning invite.  Click the link below to get on the RSVP list.

We’re heading into the time of year beloved by resource stock traders and feared by those who stick to the Big Boards.  Autumn is traditionally the strongest seasonal period for precious metals demand.  That demand is rooted in physical demand for gold in particular ahead of big gift giving seasons and buying after harvest in India.

So far, 2016 has been anything but normal in most markets and precious metals are no different.  Notwithstanding the return of the gold bull market, demand has been light in traditional gold consuming countries, notably China and India.  This year has been all about investment demand, predominantly Western investment demand.

This helps explain the hesitancy of many gold bulls.  They’re listening to the legend of gold as a fear measure.

The traditional recipe of “love buying” in Asia and “fear buying” everywhere else has been turned on its head this year.  This seems to be confusing both the mainstream financial press and many gold bugs.  They keep trying to fit gold into its “traditional” pigeon hole.

That doesn’t surprise me.  Wall St can’t seem to grasp the idea that most of the gold buying this year isn't based on fear, its based on yields.  Traditional gold bugs who tout the yellow metal as insurance against the “crisis du jour” seem to have the same problem.

All of the increase in gold demand this year comes from “speculators”.  These traders have, usually, satisfied their gold demand by going long one of the major gold ETFs.  Many old school gold market watchers see this as a danger sign.  By their reckoning, speculators are the dumb money by definition. 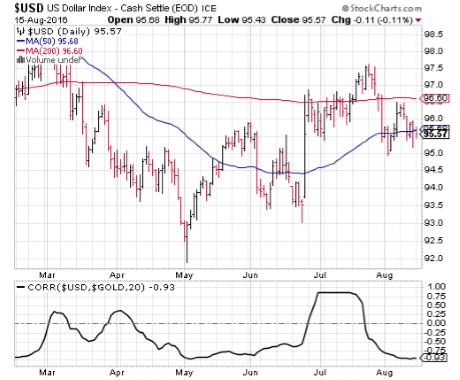 We’ve seen call after call for an immanent drop in gold prices because there is too much speculative money on the long side.  I’m sympathetic to those calls because I think ETFs are, usually, hot money.  Large amounts of buying and selling can sweep through the ETF gold market on short notice.

Just because those funds can move fast doesn’t necessarily mean they will.  I think a big chunk of that so called dumb money is large scale well known investors. Many of them are following very specific investment theses that are not short term.  That may help explain gold’s continued staying power and the buying that keeps showing up whenever gold prices dip.

The US Dollar chart above is an additional reason for gold’s staying power.   You can see from the correlation readings at the base of the chart that gold is holding its strong negative correlation to the USD which, at the moment at least, is helpful.

Traders got excited when the US reported another great monthly payrolls number.  The financial press was full of the usual comments about the accelerating US economy.   I’m not sold on that story yet.

The payroll numbers are impressive but many other US economic metrics continue to be weak.  Wall St was shocked when Q2 GDP growth failed to live up to its optimistic assumptions yet again and Q1’s growth rate was revised back down.

Part of the reason for the weak Q2 reading was inventory drawdowns.  Bulls are latching onto that and pointing out the next couple of quarters should be better as inventories get rebuilt.  They may be partially right.  At 3.4%, the Atlanta Fed’ GDPNow estimate for the current quarter’s growth rate is the highest its been in months and, for once, quite a bit higher than Wall St consensus.

We’ll see, but many other numbers including fairly important growth readings like retail sales were major disappointments again this month.  The more ominous numbers to were productivity readings that continued a trend of historic weakness.

I don’t see how the US generates the wage and disposable income growth to underpin a string of 3-4% growth numbers if it can’t solve the productivity puzzle.

I don’t think the productivity issue is that mysterious.  Companies have shied away from heavy investment in new plant and training ever since the Financial Crisis.  The problem certainly isn't a high hurdle rate for investments with the Fed sitting at half a point and most bond yields at historic lows.

Some of the decline is the energy sector but overall the trends have been weak.  Companies haven’t been displaying the confidence they would like to see their customers display.  Far more money seems to be directed at financial engineering than product engineering.   I’m not saying this will come home to roost right away.  Shareholders love share buybacks but at some point this stops being management looking out for owners and starts being mal-investment. We’re getting close to that point now. 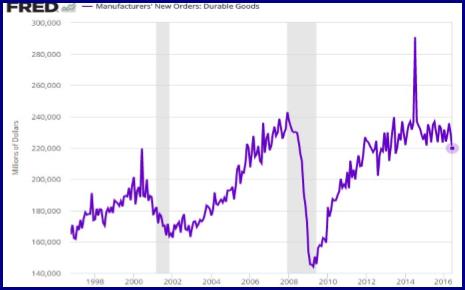 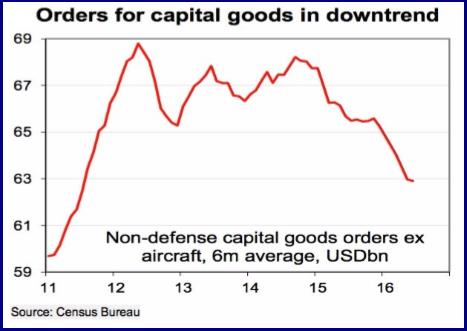 That brings us to the main topic of the last issue, namely central banks and Wall St.  The US Fed and the BoJ came to the decisions I thought they would at the last meeting but currencies initially reacted in the opposite manner than I expected.

The Fed was (slightly) more hawkish but that didn’t boost the USD or hurt gold.  The BoJ tried to be accommodative but as I suspected it just wasn't enough to make traders happy.  The effects of these meetings may have been compounded, especially for the Yen, by the Bank of England winning the “dove of the month”

competition and the continued decline of the Pound. 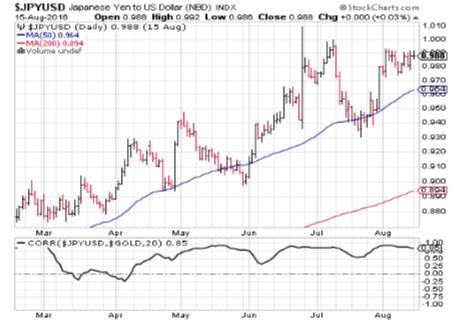 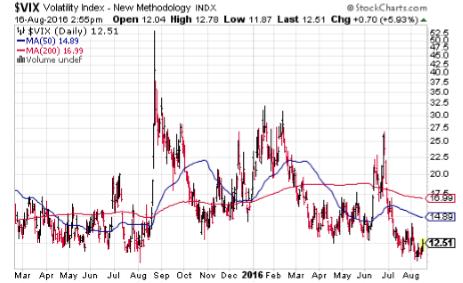 The top chart shows just how strong the Yen has been.  As this is written the Yen has actually moved through 100/USD before pulling back slightly.  That is the level it touched briefly after the Brexit vote.  Obviously the market has completely lost its faith in the ability of the BoJ or Japanese government in general to control the Yen.  This will compound the slowing growth and deflationary issues Japan is already battling.

The US Fed has exactly the opposite problem.  Several of the more hawkish FOMC members have been giving speeches around the country and warning that the market is too complacent.  They keep insisting that September is a “live” meeting but the market is largely ignoring them.

The SPX, NASDAQ and Dow have hit new all time highs several times in the past week.  Whatever Wall St might claim its not about earnings.  As I expected, as reported earnings for the S&P will again fall slightly when all the Q2 numbers are totalled up.

Traders are chasing price as the markets are not able to give them yield.  Even at recent nosebleed levels the dividend yields of the SPX recently passed that of 10 year Treasuries.  Its no wonder traders are buying stocks for yield and bonds for price gains.  Its insane, yes.  Just not surprising.

Wall St bulls like to talk about how “hated” this rally is.  I don’t understand that comment.  You can describe a market trading at all time highs with a trailing P/E over 25 many things but “hated” definitely isn’t one of them.

Take a look at the lower chart on this page.  The VIX volatility index, a risk measure, is near all time lows and there are apparently a record number of short contracts out on it.  That is traders betting risk will go lower. From here.  For once I have to agree with the FOMC members.  New York is clearly an Alfred E. Neumann market.  No worries there.

I don’t really expect the Fed to raise rates in September but it’s the last real chance to do it before yearend.  With that in mind there may be a 20% chance the Fed pulls the trigger, which isn’t priced in.

Gold has held up well, though it hasn’t been able to make new highs.  That is enough to keep driving interest in the sector with so many companies in the field and soon to report.  This could be an Autumn that creates some new legends so be sure you’re positioned for it.  Be sure too, that you keep practicing good cash management as some drill programs are bound to disappoint.

Join me at the next Subscriber Investment Summit in Vancouver on October 11th! Meet vetted mining and energy CEO’s and network among seasoned investors.