Major equity markets continue to perform well, though the rally is looking a little tired.  We’ll know in hours whether the Fed plays it dovish or hawkish and that in turn will determine if we see near term new highs.  We’re into Q2 earnings season.  There is plenty of the usual cheerleading about “earnings beats”.  Nice, except that the earnings are beating expectations that have been lowered yet again.

Its early days but already looks like we may get another quarter of declining overall earnings.  That would make six in a row. If you’re wondering when the last time was that we saw this long a string of earnings declines coupled with new highs for the market the answer is “never”.

None of that matters since it’s all about near zero or negative rates just like it was last month and last year.  The good news is that gold continues to hold up and money continues to flow into the sector.  There was a lot of money raised by a lot of companies in the past four weeks.   It sure doesn’t look like our little corner of the financial arena is seeing much vacation time.  I know I’m not.  I’m totally fine with that if its due to a market we can make money in.   I can watch the screens on the deck with a G&T in hand.  I do enough travelling and I’m fine with saving it for the rainy months.  May your outlook and your weather stay sunny and may the market gods keep smiling on us.

The gold chart below conveys a couple of important pieces of information.  One of those is obviously price. The gold price has eased back since the beginning of the month.  Importantly, and impressively, the price is still sitting about where it was after the huge updraft created by the Brexit vote last month.

It may not seem like much of a performance but it is. When you consider gold as either an “alternative asset” or a currency and think about what competing assets (equities, bonds, other currencies) have done in the past month its impressive its held up this well.

The second piece of important information in the chart below is the correlation between gold and the US Dollar displayed beneath the main body of the chart. As I noted in the last issue, the gold/USD correlation became almost perfectly positive when the Brexit vote was released.  That polarity has reversed again during the past couple of weeks and currently it’s at about –0.8.  Gold is trading against the USD again, at least for now.

To some extent the change reflects the relative strength of the USD.  You can see from the chart above that the Dollar has continued to move up post Brexit.

Some of this is “risk off” trading but not much.  The relative strength of the Dollar is a reflection of better economic readings and, importantly, assumptions about what moves central bankers will make next.  In the short term at least we’re back to the Central Bank Bet.

Look at the Japanese Yen ETF chart below.  After moving to almost 100 in the wake of Brexit the Yen has fallen almost six percent.  That move didn’t happen in a vacuum. Prime Minister Abe’s party won a larger upper house majority early this

month and Abe wasted no time before hinting at more stimulus.  As this issue was being put to bed there were stories floated that the Bank of Japan will announce a $250 billion stimulus package at its next meeting in three days.  That generated another sell off of the Yen, which is of course exactly what Tokyo wants. 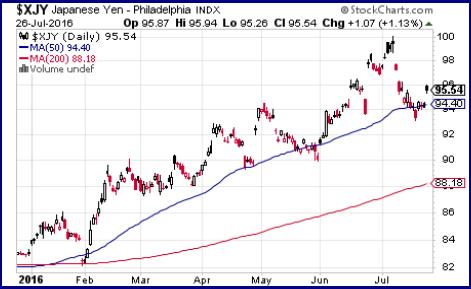 Even with all the jawboning the Yen is still trading slightly higher than it was before Brexit.  Some of that may be bond flows of the type described in the last issue.  Deflationary expectations have continued to strengthen in Japan. This, in theory at least, increases the perceived “real” return of Japanese Government Bonds and drives more buying into this market.

You’ll recall that I wrote an editorial a few months back titled “Losing Their Religion”.  In that piece I discussed how large scale currency moves generated by central bank actions had helped underpin the gold price.

Traders seemed pleased with today's rumours. The strength of the reaction indicates the market considers them a legitimate (if there is such a thing) intentional leak.  We’ll know in three days.  Remember though that the last two or three times the market expected big things from the BoJ it came away disappointed.  That includes meetings where Kuroda pulled out all the stops and threw everything and the kitchen since at the problem.

In all of those recent cases the reaction to the BoJ announcement was violently negative with the Yen soaring and the Nikkei plummeting.  Keep a close eye on the Yen in Thursday’s overnight market leading into the North American trading day Friday.  With everything that’s gone on in the past month this would be a bad time for the BoJ to disappoint.  I’m sure they don’t plan to.  But if we get a similar reaction again it could generate a large up leg in both the Yen and the gold price.

That brings us to the other central bank meeting this week which is of course the US Fed.  You’ll see the rate announcement a few hours after you receive this issue.

The market is pricing in only a small chance of a rate hike this meeting though that is up from believing there was literally zero chance of one only a couple of weeks ago.

I don’t expect a rate hike either.  If we’ve learned anything about the Fed in the past couple of years its that the FOMC hates surprising the market. I think its too complacent to assume there is no chance of one though.

By and large, the US economy has been putting up pretty good numbers. Economic readings are far from perfect and growth still isn’t accelerating but readings have improved and New York is in near record territory. 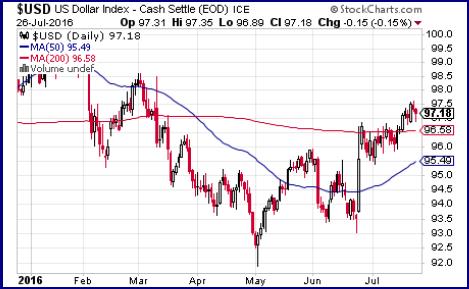 As a minimum I think the Fed will have to strike a less dovish tone than the market seems to expect.  We’re getting close to US elections.  I don’t see the Fed wanting to muddy the waters by hiking rates too close to the first week of November.  Traders assume this means the Fed holds off until well into 2017.  Perhaps, but I think the FOMC will want to make the September meeting kinda sorta “live” by hinting at a potential rate hike.

I’m skeptical they would actually pull the trigger too but most traders seem to assume they won’t even hint at it.  I think that is too complacent.

My expectations then are the potential for a slightly hawkish Fed statement that would be a negative for both gold and equities.  The effect shouldn’t be huge unless the Fed actually raises but it could be enough to generate another test of the $1300 level.

While the Bank of Japan meeting two days later has been more telegraphed the most likely outcome seems to be a “sell on news” reaction.  If that is the case it would be gold positive and, potentially negative for equities, at least Japanese ones.

The combined effect of the two meetings could be a lot of volatility that ultimately ends up being much ado about nothing.  The most negative potential scenario would be the Fed hiking and the BoJ meeting expectations that could generate two up moves in the USD and corresponding drops in the gold price.  Never say never but I think the odds of that combination are far less than 50:50.

Understand that I don’t think these short term moves, however violent, change the underlying thesis much.  Even a double whammy drop in the gold price should be followed by relative calm since it would take more than one move to change the negative real interest rate backdrop.

That brings us to the gold sector or, more specifically, the gold equities sector.  The charts below display the GDXJ and TSXV indexes since the start of the year.  We have indeed seen some pullback in the GDXJ, though its really fairly minor.  Gold is about 5% off its year high while the GDXJ is currently off about 12%.  That’s roughly 2.5 times leverage to the gold price move, not that large all things considered. 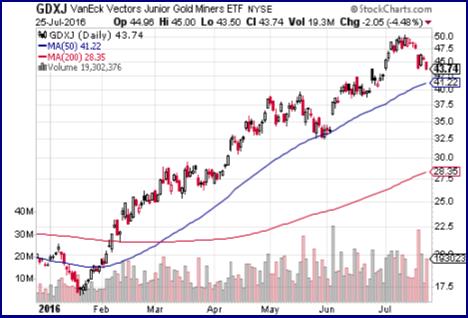 You can see from the chart that GDXJ volumes aren’t particularly light and haven’t dropped off much to account for “summer doldrums”.  And as you’ll read in the update section there are no shortage of companies raising money with full overallotments getting filled.  I think that after almost five years of bear market most brokers are not taking the summer off. Its their first real chance to make money in years.  They’re not passing it up.

The same pattern is displayed by the TSXV index, only more so.  We’ve seen nothing since the bottom in January that you could call a pullback with a straight face.  That’s what I expected and, so far at least, my expectations have been met. 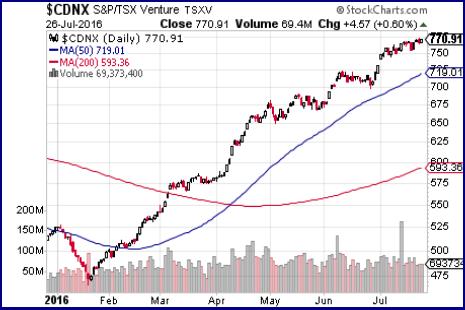 We’re about to enter the two strongest months of the year for the gold price.  I don’t know if they will be this year but given how the year has gone so far I don’t think I would be betting against it.

Watch the outcomes of the central bank meetings this week.  If things don’t go the way we want we could finally see that summer pullback everyone else predicted.  If we do, it could be fleeting so be prepared to act on it if it comes.  If the year continues to unfold the way I expect the market could be crazy in the fall.  You want to be positioned ahead of that if at all possible.