And So It Begins

From the HRA Journal: Issue 264

Welcome to the Trump Years, and the Year of the Rooster.  The markets were entertained, until today. Traders seemed to assume Trump would enact all the things Wall St liked and none of the things it doesn’t.  However, the immigration ban looks in its final form it should disabuse Wall St of the notion that it’s going to get to call all the shots.

Trump has filled his cabinet with a number of the usual suspects from the usual power centres but he’s also shown he hasn’t given up on his tendency to react viscerally to events.  That leaves room for plenty of unpleasant surprises.   I think the honeymoon—in terms of market volatility at least—is now over.  It remains to be seen if we get a bigger drawdown in coming weeks on top of that.

Mining Week in Vancouver went well, especially the Metals Investor Forum.  Note the link on the first page of the Update section.  Use that to find videos of the MIF presentations if you couldn’t make it.

On a similar note - it’s time to register for the Subscriber Investment Summit in Toronto on March 4th if you haven’t done so.  Tommy and Keith are working on some special guests.  I’ll send you all an email once we have the details.  In the meantime, click on the link below to make sure your seat is reserved.

We’re only one week into the Trump Era and things are already moving fast.   Trump clearly wants to make a name for himself as a president that gets down to business and makes good on campaign rhetoric.

One week does not an administration make but we can already see a carry over of Trump’s election persona, good and bad.  The obsession with anything that reflects on Trump’s stature—or that he thinks reflects on it—continues.  That’s not a good thing in a president but it’s classic Trump so I guess we all get used to it.

On the legislative front the new administration is moving very fast, working by executive order to put its stamp on the country.  A lot of these executive orders have been contradictory and confusing.  There has been some back tracking.  We’ll see how things go when the time comes to get actual legislation through the House and Senate.  I assume some of these bumps will be smoothed out.

The burst of presidential activity was well received by the markets, or some of it was at least.  The Dow managed to top 20,000 to the delight of CNBC and Barron’s, but won’t hold that level if Trump keeps throwing legislative curve balls.

As this issue was being completed markets were grappling with a new Immigration policy that led to thousands being turned back at airports as officials tried to parse the intent of the executive order. Trump’s own aids couldn't’ seem to agree on all the details and the story is still changing as this is written.

Markets don’t like uncertainty and they don’t like policies they construe as being “anti-business”.  The immigration ban is being viewed that way, especially by the tech sector which regularly hires from a global labour pool.  US markets are getting hammered thanks to the uncertainty and confusion.

It’s too early to say how all this will turn out but not too early to say there are sure to be plenty more issues like this going forward.   Trump tends to shoot first and ask questions later. 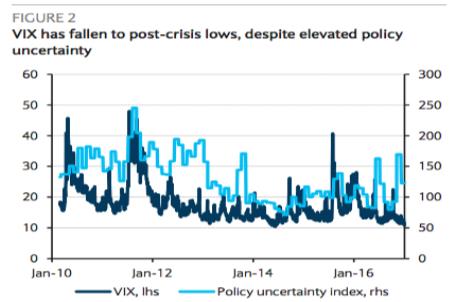 The thing I found most remarkable about the current market was the low volatility and rock bottom risk measures, post-election.  The chart above compares VIX, the volatility measure used as a proxy of overall market risk to a policy uncertainty index.  They’ve been going in opposite directions since the election.  I find that amazing given Trump’s penchant for overreaction.

We’re starting to see risk measures move up now.  I’m surprised it took this long. If the first week of the Trump administration is anything to go by we can expect lots of surprises, not all of them good. That finally seems to have dawned on traders.

The US Dollar chart below shows some topping action.  I think the currency chart is as good a measure as any of the “Trump reflation trade”.  Traders expecting the US to pull away from all competitors bid the Dollar hard from the election until year end.  It’s eased off since then as policy uncertainty increased and markets wait for

the US economy to live up to much higher expectations post-election. 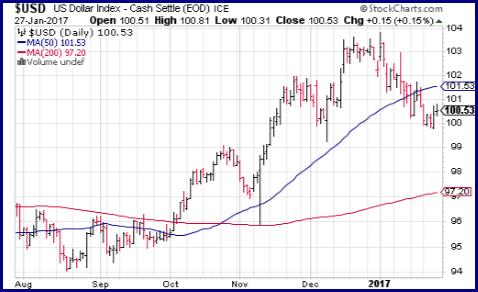 That’s not to say the run on the USD is necessarily over.  The Fed will have something to say on that issue and it meets again in a couple of days.  Recent speeches by FOMC members, including FOMC chair Yellen, have been more hawkish.  Fed members are worried about overheating if Trump manages to push through a large fiscal stimulus package.  In that event, the Fed would view its job as counterbalancing that with tighter monetary conditions.

The Fed could achieve that by either shrinking its balance sheet or increasing interest rates, or both.  I don’t expect an increase at the meeting this week but we might get more hawkish language.  Like everyone else, the Fed wants specifics of the Trump administration spending plans before worrying about how much to tighten. 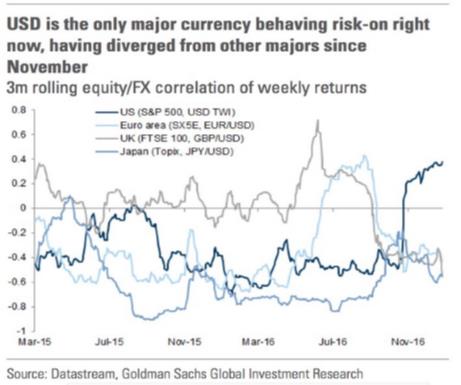 Interestingly, as the chart above shows, the US Dollar has shifted from being a “risk-off” to a “risk-on” asset since the US election.  It’s the only major currency that is positively correlated to equity returns.   This is yet more evidence that when it comes to both NY markets and the USD, its all about “buying the dream”.

All the above is based on the implicit assumption that the US economy accelerates going forward. That is driving markets, USD strength and worrying FOMC members.  As you know, I think the jury is still out on that.   Americans are definitely more optimistic than they have been for years.  That optimism has to be translated into actual spending before we see the economy lift off.

The first estimate of Q4 growth came in at 1.9%, below consensus and well below the 3.5% pace reported for Q3.  The main reasons for the slowdown were a widening trade gap and weaker consumer spending.  You san see from the chart below that the Q4 rate is the middle of the range GDP growth has occupied since the Great Recession.   So far, no indication of acceleration. 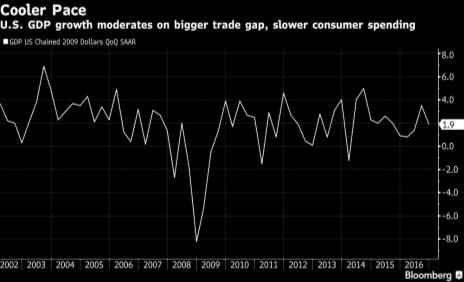 And, of course, the stronger USD is acting as a drag.  That has Trump ratcheting up the trade rhetoric.  I expect it will also lead to clashes between Trump and Yellen if Fed hawkishness pushes the Dollar higher.  I don’t know if Trump can have his cake and eat it too when it comes to trade and the US currency but that won’t stop him from trying.  Expect more jawboning by Trump to try and weaken the USD if it shoots higher again.

Over the next couple of months we’ll see a deluge of  executive orders followed, presumably, by legislation and the outlines of Trump’s first budget.  That will give a clearer picture of just how much fiscal stimulus is coming and where it will be directed.  I don’t think any of this will happen as fast as the markets expect but we’ll see.  Trump certainly didn’t waste any time with his first few edicts.

The chart on this page, which you’ve seen variations of in the past, shows you what should be Job One for Trump.  Growth in real weekly earnings has been falling since early 2015 and is currently close to zero. 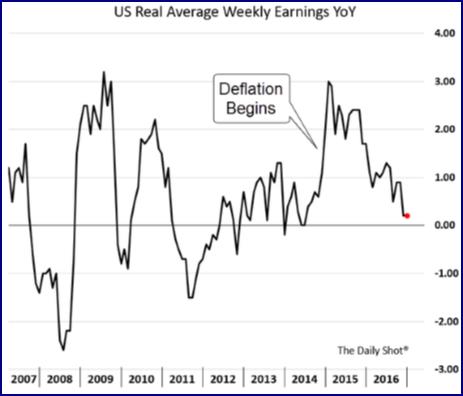 We have seen increases in consumer spending lately, but its coming on the back of a lower savings rate.  I think it’s a positive sign that Americans feel optimistic enough to lower their savings rate.  That is only a short-term solution however.

We’ve seen inflation increase slightly over the past 2-3 months. Not enough that I would be concerned about it but then, I’m not an FOMC member.   My comments from the last issue stand when it comes to Trump and inflation.  I think there is a battle brewing between the administration and the FOMC.  Trump wants a cheaper Dollar which means he wants loose monetary policy to continue.   I don’t think the president can literally unseat an FOMC member but I can certainly imagine Twitter storms directed at Yellen if Trump thinks she’s cramping his style.

While I’m not worried about inflation really, I would agree that we’re at the point in the economic cycle where things like tax cuts and spending increases won’t have the impact most are hoping for.  Other than the occasional quarterly spurt on the back of a tax cut I don’t see Trump generating 3-4% growth.  It’s too late in the cycle for that.

While the markets experienced a big dump while this was being written the “Trump trade” isn’t dead yet.  I think it will be though.   Over the next month or so I think expectations will be ratcheted back down.  That could lead to some rocky times for equities while the adjustments take place.  We could see a lower USD in that case, if it continues to trade as a “risk on” asset.  That will give the resource space some cover even while the rest of the market trembles.