From the HRA Journal: Issue 265

Traders are starting to bail in advance of PDAC.  That’s usually a wise move, though the editorial lays out some counter arguments. Even if your preference is to do some selling I think you need to be selective and look at which stocks are more likely to weather a pullback.

It may seem counter-intuitive but I think some of the earlier stage stocks could be the stronger ones through the next couple of months. When traders decide to get behind a story, they can more than counter act the seasonal sellers.  We’re starting to see that behaviour in a couple of the early stage companies HRA tracks, with the first company in the update section being a prime example.

Note too, that seasonal effects for gold and silver won’t necessarily translate to other metals.  The poster boy for that idea is zinc which I don’t expect much softness in unless China really falls off a cliff.  In this case it’s the last company in the update section that I think will shrug off the general seasonal trend.

If you’ve got much experience trading resource stocks, then you don’t need to ask “which curse?”  We’re closing in on the Prospector and Developers Association of Canada (PDAC) convention in Toronto in the first week of March.  This is the world’s biggest mining industry conference.

Companies try hard to have something new to say at PDAC so expect a flood of news releases in the next 10 days.  That news glut up to and around PDAC leads to an inevitable news drought following it.  Combine that with seasonal weakness that is common in the gold market in Q2 and you’ve got the makings of the PDAC Curse.

The Curse is a (literally) perennial subject of debate.  Will we have one? How deep will the correction be? Should we just get the hell out of Dodge?  Most traders take it as a given we’ll see a big correction during and after PDAC.  They’re right about that just about every year.  For that reason alone, some caution is warranted.

So, what about this year? (I DID say perennial) On the balance of probabilities alone we’ve got to assume a correction BUT there are a couple of things that could alter that calculation.  One is metal prices in general and increased interest in the space.  The gold chart on page one does give one pause, but only to a point.

Gold has flattened out in the past couple of weeks, its true.  There have been a number of days during which gold saw significant drawdowns only to be bought back to even before the close. Its all those episodes of buying to “save” the trading day I find interesting.

When you combine major markets at all time highs, a US Fed that is sounding increasingly hawkish and renewed strength in the USD its surprising gold hasn’t traded a lot worse.  It wouldn’t be surprising to see a large pullback in the gold price under current circumstances.  The fact it hasn’t happened is, in my opinion a
bullish sign.

While so many fret about the gold rally appearing to run out of steam they’re ignoring the fact a rally of any sort under current circumstances is pretty impressive.  That doesn’t guarantee continued short term gains but it tells me there are other forces at work here.  The composition of the buyers is shifting.

In part, I think this is due to increased focus on the potential for higher inflation.  I’m not completely sold on the idea myself.  The move in most countries (not just the US) CPI and PPI indices has been impressive.  All of the EU countries, for instance, are out of the deflationary environment that plagued them for 2-3 years. I think the shift is real and the price increases are being seen in a broader range of products.  A lot of the move is energy prices however which I’m leery of.

Even so, the moves in inflation and widespread increases in metals and commodity prices has brought generalist traders back to the space. I have talked to many management teams that have spoken of unsolicited approaches by generalist funds in the past couple of weeks.  Some of those are value types that seem drawn to the gold and silver subsectors precisely because they haven’t seen the sort of price moves that coal, iron ore, zinc and even copper have.  They’re looking for the next big thing, not the last one.

That sort of money can be fickle but, once it makes an entry it tends to stick around.  Whether these outside funds start buying soon enough and in a quantity that balances selling by resource traders remains to be seen.  It could well be that the correction is much shallower than most seem to expect.

The other factor is an increased appetite for gold as an insurance trade.  The markets are doing great and seeing new highs almost daily.  In fact, things are SO good that many experienced hands are getting paranoid about it.  I’ve seen more and more brokerage houses suggesting gold or gold stocks get added to the mix lately.

Most aren’t doing this because they expect significant, or even minor, weakness in the US Dollar.  Their focus is increased political uncertainty in both the US and Europe.  This isn’t a currency trade, it’s a bit of “risk off” insurance.  Again, this may not be enough to counteract seasonal forces that portend weakness in March but it could certainly blunt the impact.

To this you could add a third reason which, I admit, is me putting on my contrarian hat.  I’ve had so many conversations with good traders I know that are selling that I’m beginning to wonder how many have done their selling for the time being.  I don’t think we’re out of sellers just yet, but trades do have a way of reversing when they get too one sided.

We also need to consider that we are still in a pretty young bull market here when it comes to resource stocks.  Markets behave a bit differently early in a cycle.  Last year was a good example.  Pretty much everyone sold to avoid the PDAC curse and it turned out to be the wrong thing to do. The market kept running until May. I’m not prepared to say we’ll have a repeat just yet, but I suspect if we get a consolidation it will be milder than many fear.

Last but not least, there’s the subject of real interest rates.  This is something I’ve touched on a few times in the past year.  It bears repeating however since it’s a powerful force that has defined many commodity price trends (bullish and bearish) in the past.

The two charts on the next page show the current state of affairs.  The top chart shows the gold price along with an inverted chart of US 10-year Treasury real yields. The chart presentation makes the inverse relationship between real yields and the gold price fairly clear, and the same relationship holds for other commodities.  Based on the relative moves wouldn’t be surprising to see gold move higher based on this relationship.

The bottom chart on the next page is a 10-year trace of the urban CPI and the 10 year yield less the urban CPI (the real yield).  You can see from the chart that, using the CPI measure, 10 year real yields just dipped below 0% for the first time since mid-2012.

Why did yields just go negative?  It wasn’t because of falling nominal yields.  There has been a slight drop in 10-year yields since mid December but nowhere near enough to account for the change in real yields.  The real change is due to rising CPI readings as you can see from the black CPI trace on the bottom chart.

That tells is where we are now, and certainly helps explain gold’s resilience. What about the market going forward?  Opinions, as always, are mixed.  Several Fed governors have weighed in on the subject of inflation recently.  Most think the increases will moderate.

I’m inclined to agree until I see inflation readings broaden more.  Most of the move so far has been energy, rents and medical costs.  Oil prices have flatlined recently.  That should help flatten the inflation curve unless there is another up-leg in oil prices.  There are lots of traders expecting higher oil prices.  Indeed, the speculative long positioning in the oil market is the highest in history. That alone makes me skeptical.  We’ll see.

The other thing that could reverse the trend in negative rates is, of course, the Fed raising rates.  The market is still pricing in only two more increases this year.  That might be optimistic if we take recent FOMC member comments at face value.

There is a large contingent that believes the Fed can’t raise rates.  Their argument is summed up in the chart below.  It shows central bank balance sheets over the past few years.  The Fed stopped expanding its balance sheet almost two years ago, but the ECB and BoJ more than made up for it by expanding theirs.  Central bank bond purchases “crowded out” local buyers in Europe and Japan.  That drove those buyers into the US market, helping to drive down US yields. 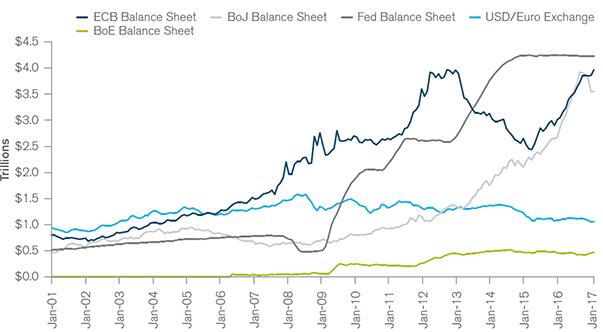 If the era of QE is indeed coming to an end in Europe and japan that trend would reverse.  The Fed could be faced with rapidly rising Treasury yields even if they do nothing.  Those that believe this model also believe that spike in rates will be disastrous for Wall St. It would force the Fed to back off on rate increases.

I’m not sure I buy this argument without more empirical evidence. If its true however, negative yields will be here for a while and The Curse just might be avoided.