From the HRA Journal: Issue 274

The USD got its bounce thanks to the payroll report but it wasn't a strong one and is dissipating already. Surprising the bounce wasn't larger given the huge short position.

North Korea turned out to be a whipsaw. The gold price was lifted, then knocked back, as the tension mounted then receded. Gold has other drivers and having the political one ease off is better for us in the long run.  I don’t think the downtrend in the USD is over for reasons I go into in the editorial.  Seeing gold prices rise on days the big markets are doing well is a good thing. I want to see gold getting bought because people think it’s cheap, not because they see some catastrophe on the horizon.The general bullishness now very much applies to the base metals space.  Copper has stayed strong and zinc just went through its February high very convincingly.  All the base metals and bulk materials look pretty strong.  That speaks to more optimism for offshore and developing economy markets, the real demand driver for them.

Buying in the major markets continues to be strong which is a good sign, but it seems to be getting increasingly concentrated in big names, which is not.  I don’t see any obvious black swans at the moment but falling market breadth is often the first warning sign before a correction or major top so I’ll be keeping an eye on that.

Nothing like threats of nuclear war to give traders a bit of a wakeup call. Just a couple of weeks ago, there was NO fear in the markets.  Everyone was chasing the indexes and the FANG gang.  Long VIX trade?  That was for wimps.  Then North Korea came along.  Then it left. Welcome to Wall St circa 2017. No bad news allowed.

A lot has happened in the past couple of weeks but traders still seem quite unconcerned about it all.  Or, at least, they seem incapable of being worried for more than a day or two at a time. Apparently, even nuclear war doesn’t trump liquidity and index chasing.

Political moves do tend to be short lived, which is why I never trust them. Kim Jong Un and Donald Trump trading threats had people on edge but it seems to be passing already.

It’s not a big secret I have some doubts about Trump’s sanity, and no doubt about Kim’s lack of it, but I don’t think we’re on the brink of nuclear war. No one (including Kim, I’m sure) doubts the US could vaporize North Korea if it came down to it. Americans don’t want to do that and North Koreans certainly don’t want it done to them. Both leaders have more than a bit of a tendency to bluster but its just talk.

I expect self-preservation to prevail in the end even if common sense doesn’t.

Threats of mushroom clouds notwithstanding, we’re still in a market where most traders see no need for insurance. Most traders also don’t see a value to gold or gold stocks beyond insurance. 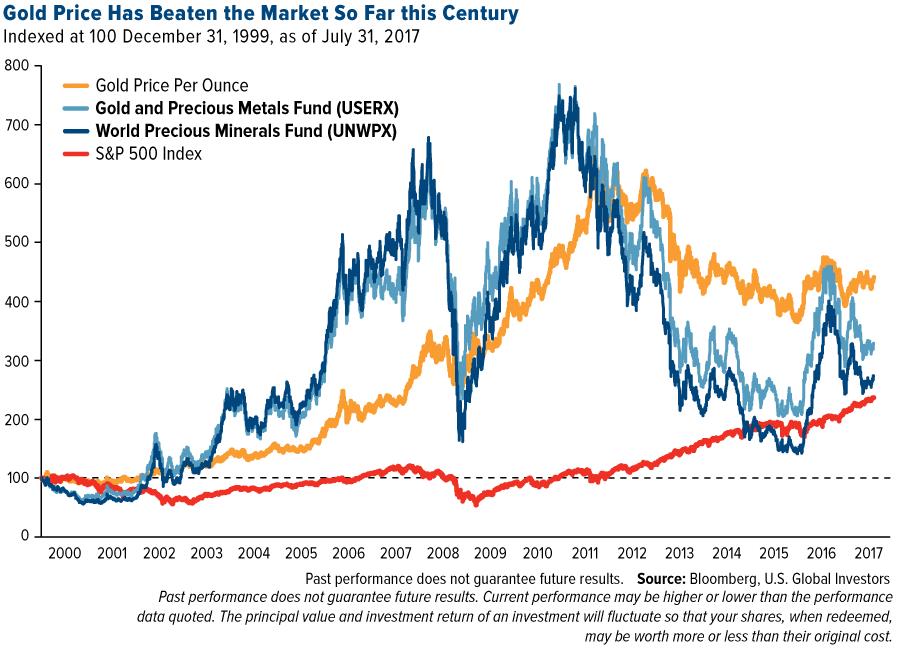 The chart above, courtesy of US Global Funds, shows the irony of that mainstream trader’s belief. It’s also a reminder to us that there are good reasons to have gold and gold stock exposure even if you don’t go in for tinfoil hats. The chart shows the trace of the gold price, a couple of US Global gold stock funds and the SPX since 2000.  Surprise!  Gold and gold stocks have outperformed the SPX since 2000, by a pretty wide margin.

I doubt more than 20-30% of Wall St traders would give the right answer if you asked whether gold or US equities have done better in the past 17 years.  It’s “fake news”.  Granted, the right side of the chart shows much of that outperformance dissipating.  That shorter-term view is dominating the discussion.

When it comes to gold equities, there is a real “what have you done for me lately?” feel to the market. “Not much” is the answer. The mainstream won’t get back on board until they see a reversal they can believe in.

The chart below shows that the gold price got tantalizingly close to the April and June highs before turning lower yet again.  Close won’t be good enough for gold miners.  We need another $30 to $40 on the upside to push the price through $1300. 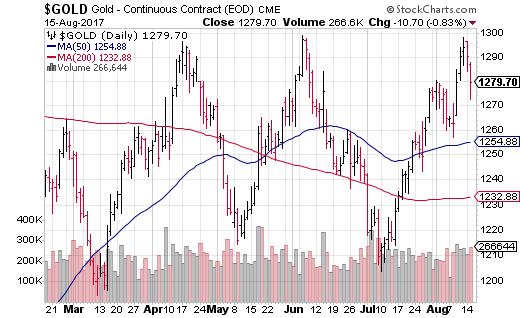 It’s possible it comes for political reasons though I really hope not.  Politics has gotten all the attention, as usual, but its not the only reason gold gained.

In the last issue, I noted there were economic metrics that would have a big impact on the USD and, by extension, gold.  Both the Producer Price and Consumer price indices in the US came in lower than expected.  The July nonfarm payroll number was a solid “beat” but hourly wage gains were again disappointing with no acceleration.

The good payrolls number, as expected, led to a bounce in the heavily oversold US Dollar.  That was followed by a large beat on the July consumer spending number, a metric that feeds directly into the GDP growth calculation. You can see the impact of the positive metrics on the right side of the USD index chart below.  You can also see that, so far at least, it’s not much of a bounce. 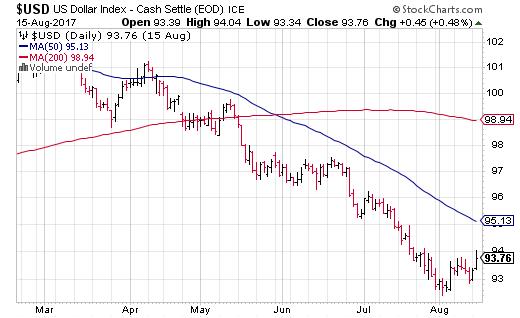 Currency traders were very heavily short the USD before the payroll report.  Some of that still needs to be unwound, but continued signs of weak inflation is working against the USD.  The chart below shows the 10-year US Treasury yield.  It’s still hasn’t definitively broken the downtrend that started in early July when the Fed’s hawkish narrative started coming apart. 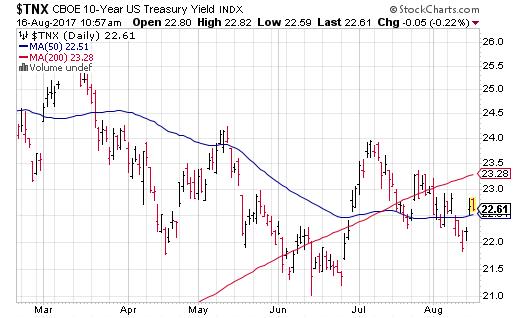 Bond traders barely reacted to the payroll beat because they were more focused on the hourly wage changes.  Like previous months, there was no acceleration in wage gains.  They did react to the consumer spending number but that reaction too appears to be dissipating already.

That narrative should be helping gold, and has helped a bit, but falling inflation works against gold in the short term.  Real yields didn’t decline due to the reduction in inflation.

As you know, I think real US yields that are the biggest influence on the gold price.  They are equally important to currency traders.  Differences in real yields are one of the main drivers in the currency market. Lower real yields generate buying in the gold market and selling in the USD market.

The top chart below gives good perspective on the relationship between the level the USD is trading at and real yields, in this case the yield on 10-year inflation protected securities.

Note that both the USD index reading and the TIPS yield on the chart are inverted. The two-year chart shows that the USD and TIPS yield have a fairly strong correlation and usually track one another.  Until recently. The USD has been in a downtrend for the last five months but real yields have not. 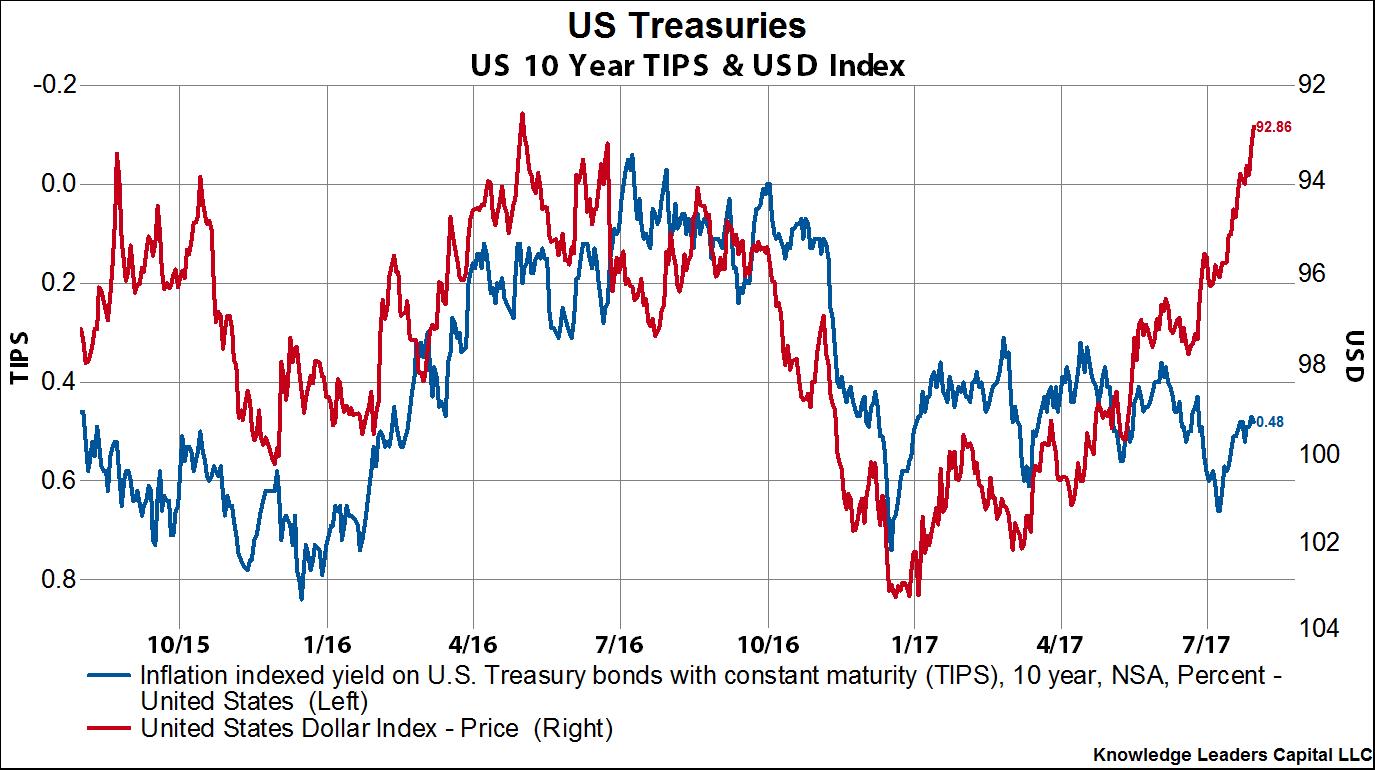 These gaps tend to close, the question is whether the USD rises or real yields drop to make it happen.  Dollar bulls assume a rising US Dollar will close the gap.  It’s possible, if the US economy accelerates enough.  There are no signs of price pressure except in financial assets though so I think there is still a good chance falling TIPS yields help close that gap.  If that is how things play out it will be a strong positive for gold and other commodities.  Hopefully its real yields that deliver a $1300+ gold price, not unhinged politicians.

Gold is the sentiment driver for the junior space but its base metals that have been the news makers recently.  The weaker dollar, production issues and evidence of accelerating infrastructure spending in China have lit a fire under the entire base metal space. 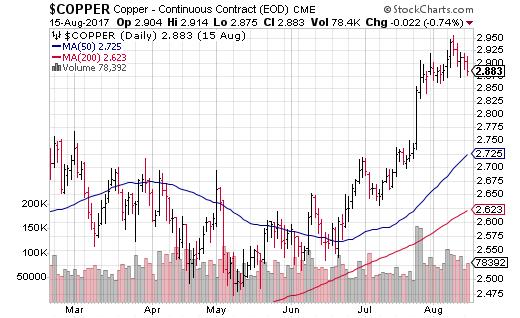 The last two charts show the scale of the move in copper and zinc, which is matched by similar moves for other metals.

The zinc chart doesn’t show the last-minute surge that occurred as this issue was being competed. Zinc pushed through its February high and then accelerated to the upside. As this is written, its sitting near $1.40/lb—a 10-year high.

The timing of the base metal move was good for a couple of HRA companies that released impressive copper-gold drill results, as you’ll see in the updates.  None of the zinc explorers/developers have reported since the latest move started but we should see results from all of them soon.

For all the angst, gold is trading well enough to support explorers with good news. That’s enough for the moment.  Now its up to management groups, and Mother Nature, to deliver results from the field speculators can get behind.