The Fed Strikes Back

From the HRA Journal: Issue 276

Well that sucked. After a move to $1380 gold quickly turned tail and gave up its gains. That took some of the speculative shine off the market.  One piece of good news is that gold equities are still trading (slightly) better than bullion which is generally a positive sign even when gold’s behaving poorly.

Northern Hemisphere reporting is in full swing and there are A LOT of updates.  Many are drill results though a few are from companies with drill results still to come.  Notwithstanding the drop in gold prices, companies that have reported strong drill results, especially the high-grade variety, are still getting well rewarded. There has been a lot of speculative money flowing into a short list of companies that are flavours of the day.  Whether that ends well for all of them remains to be seen.  The important point is that the speculative flows are there to begin with.   However things end, there are traders making money on them right now and those funds tend to get recycled.  That is good for the sector even if the current gold market weakens or even negates an autumn rally.

Note my comments on the zinc market at the end of the editorial. My zinc bullishness isn’t news but I think there is a chance for a substantial move higher in the very near term. Metals markets are opaque so we’ll just have to see if I’m right. Either way, we should know quickly.

So much for gold being “comfortable”.  The trend stopped being our friend not long after the last issue was published.

After a nice, and all too brief run to the high $1300s, gold round tripped and is currently trading back at the $1280 level.  It’s still at levels it only reached during two previous peaks (see the chart below) so all is not lost, at least not yet.

So, what happened?  Mainly, central banks happened.  I don’t mean that in the old school conspiracy theory sense.  Central banks, particularly the US Fed, held meetings and gave speeches where they were far more convincing than in the recent past about their willingness to keep raising rates.

Evidence? Look no further than the chart on the next page that displays the yield on the 5-year Treasury Inflation Protected Security (“TIPS”).  TIPS is widely considered, and traded, as a proxy for the real (inflation adjusted) risk-free yield in the US. 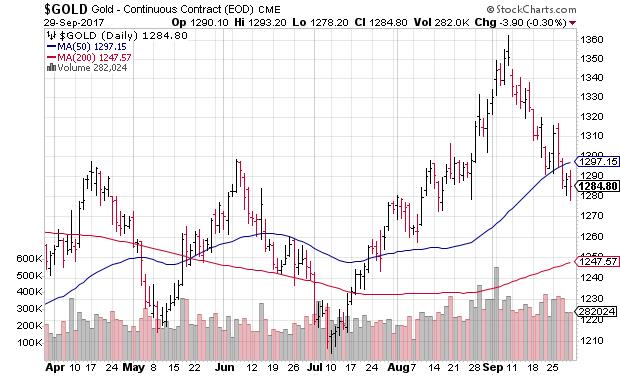 You can see that the TIPS yield moved from negative to positive territory as September wore on.  I’ve stated many times that real yields are the key driver for short term moves in the gold price.  Unfortunately, that proved to be all too true this month. Its no coincidence that the gold price rolled over just as the TIPS yield bottomed. 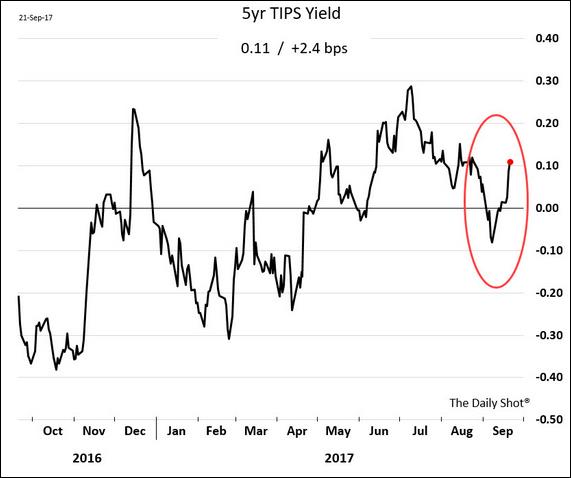 There are several reasons behind the move up in rates and down in gold, and currency effects played their part as well, but a change in perceptions about yields were the most important.

The last US Fed meeting ended with no change in the headline rate, as expected.  What did change was the general hawkishness of tone, especially from Fed Chair Yellen during her quarterly Q&A session with reporters.

Yellen noted the FOMC was unanimous that the long awaited (and longer threatened) start of the QE unwind would start in October.  This involves selling some of its huge bond inventory and, basically, moving from being a buyer to a seller in the bond market.  In theory, this should move rates a bit higher even if the Fed doesn’t move the official discount rate upwards.

The forcefulness of Yellen’s comments seemed to take bond traders by surprise.  It put a bottom under market yields which have moved steadily higher as Yellen and other FOMC members (though not all of them) made similar remarks during later speeches.

That’s one side of the real interest rate equation.  The other, stranger side is the inflation rate itself. The two charts on the next page show the Core PCE rate and the two-year bond yield, a good measure of trader’s rate expectations.  PCE is not the inflation measure normally used to calculate real rates. I’m displaying it to make a point, because it’s the preferred measure for the FOMC. 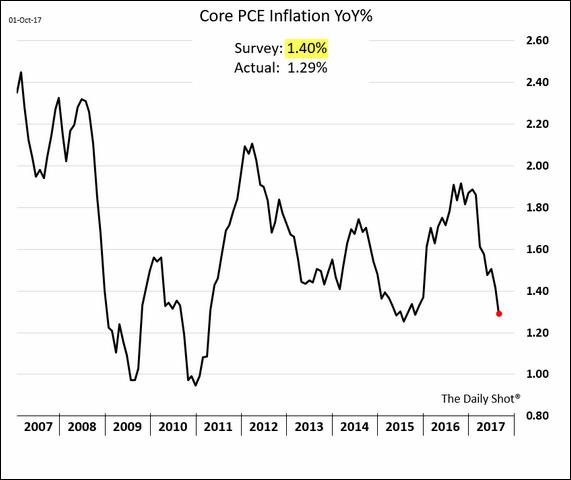 Note that the PCE chart covers 11 years while the bond yield chart covers only one.  You can see from the PCE chart that inflation is definitely NOT an issue.  It’s been falling since early this year and manages to miss expectations month after month.  Indeed, the move in real interest rates can be traced as much to lower inflation as higher nominal yields.

The inflation rate in the US would be even lower if not for strong increases in rents. Should that settle down we could see yet another down leg. 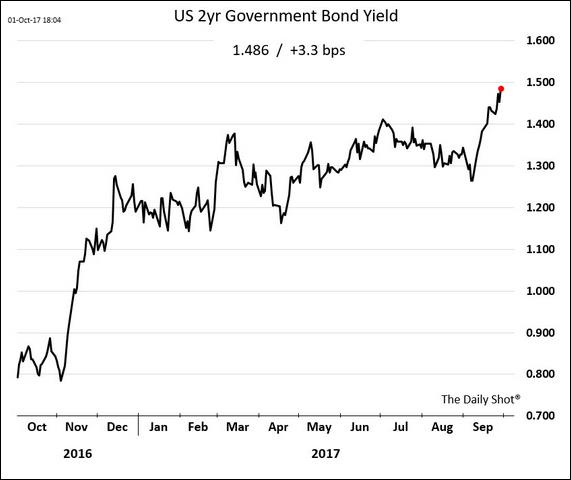 The inflation chart (pick your index) certainly isn't news to bond traders who watch it like a hawk.  What WAS news was Yellen’s admission during the last Fed meeting that the FOMC is (surprise!) clueless about why inflation isn’t behaving the way its “supposed” to.  More surprising still was her admission that she was planning to pretty much ignore it as a factor in rate decisions for the foreseeable future.

I think that last admission was the real shocker for bond traders.  Yield spreads show traders moving the odds of a December rate increase from almost zero to over 50% in a matter of days.  Those days coincided with the drop in gold prices.

All this bond market drama was combined with a strong return of “risk on” on Wall St thanks to some better economic readings and the start of a push in Washington on tax cuts.  As noted earlier, that is a big topic for Wall St.  They will be among the largest beneficiaries personally. And if tax changes lead to companies repatriating money that will help Wall St too.  Because companies will use it to create jobs?  Please! That’s so 1950’s!  No silly, they’ll use it for share buy backs to increase the value of their options, driving indices higher in the process.

On top of that are some currency effects that are still working their way through the market.  The German election results make it much tougher for Chancellor Merkel to form a coalition this time. The political vacuum in Europe’s most important economy has put a lid on the Euro.  Problems in Spain around the Catalonian independence vote will weigh on the Euro too.

So where from here for the gold price?  Hard to say.  We don’t actually know how much impact the QE reversal will have.  Rates have already moved so they may not keep climbing even if the Fed is selling bonds.  The US Dollar hasn't had a large bounce yet, though it seems to have bottomed. Large scale currency moves tend to have long cycles and once a large move starts it tends to continue.  While there are reasons to think the USD has bottomed short term the bigger trend is still downward.  We’ll have to see if that reasserts itself.

Rates have seen a big move already, especially when weak inflation is taken into account.  There is a lot of optimism about tax cuts on Wall St, that may not be well founded.  There will be a battle coming within the GOP.  The dissenters won’t be centrists this time, it will be hard right deficit hawks. The GOP badly needs a win.  Maybe they will get one but the jury is definitely still out. I wouldn’t count those chickens just yet.

A New Push For Zinc?

Gold and silver’s short-term future doesn’t look rosy until some issues resolve themselves but things look better for base metals, especially zinc.  Copper had the pullback I feared it might, though I’m fine with it trading in the $2.90 range. That is high enough to assure good copper results get noticed as long as it holds that level. 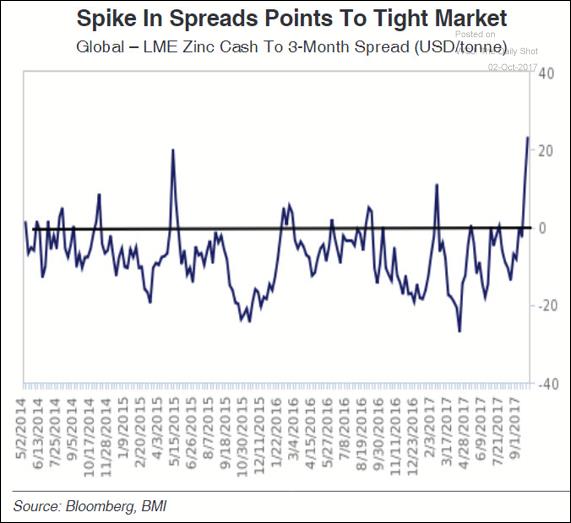 The more interesting metal right now is zinc—again.  Zinc prices have moved back to, and slightly through, their early September high.  What is more interesting is the market internals.  The chart on this page shows spread between cash and three-month futures prices for zinc.  The spread has exploded in the past few sessions.  Zinc is in “backwardation”, which means the cash price is higher that the price of zinc futures thee months out.  Backwardation occurs when there is stress in the market and traders need to go long or, more likely, close out short positions, badly enough to be willing to pay a premium for an immediate fill.

In addition to this, we’ve seen a steep decline in “available” warehouse inventories, with a lot of cancelled warrants, which removes metal for use in day to day metals market transactions.  We’ve also seen zinc warehouse inventories on the Shanghai market hitting new lows.

The current combination of official warehouse inventories and price spreads hasn't been seen in the zinc market for 10 years.  In fact, the current situation is very reminiscent of the one that prevailed just before zinc prices really took off in 2007.

I do need to add a couple of caveats here. Metals markets are extremely opaque and games abound. Most of the official supply seems to be in the hands of a single seller, but no one seems to know who that seller is.  The amount of zinc held outside official LME or Shanghai warehouses is also a mystery. And of course, there’s Glencore, which can bring zinc capacity back on line, though not immediately.

In short, this is not a sure thing. Metals markets never are.  But it’s a situation that should resolve one way or the other quickly.  If there are off-market stocks ready to fill the void we should quickly see jumps in official warehouse inventories.  If we don’t, I expect zinc bulls will be emboldened and start buying more aggressively, possible MUCH more.  I think the zinc market has a lot of life in it anyway, but we could soon see a price move that multiplies the speculative interest in the space. I think this is not the time to be selling zinc stocks if you own them, and is the time to be buying them if you don’t