From the HRA Journal: Issue 277

Apologies for this issue coming out as late as it has.  I’ve been down with a cold and on antihistamines for a week.  I rarely catch colds, which might explain why I don’t write well when I’m drugged up.  Several companies released news in the last 36 hours and, since the issue was late already I figured I’d better include them.  So, long update section again.

Gold continued to struggle since the last issue but copper made a comeback and other base metals at least held their own.  The recent USD uptick hurt them a little, but base metals are pro-cyclical, so if things aren’t going well for gold near term, they should go better for copper and zinc.Traders have been a bit skittish in NY but strong earnings reports from a couple of the FANG stocks will probably put them at ease again.  This still feels like a market that will keep going up, until it doesn’t.  Hard to say what will end the party on Wall St but it may not be something anyone sees coming.

A new gold developer/explorer has been added this issue, in part because the gold sector is weak. That is the logical time to be shopping.

Note the details about the next Metals Investor Forum on page four, including a live link to reserve your seat.  It’s going to be a full house again, so don’t delay using that link.

Gold continued to struggle this month.  Sentiment in the gold space has been poor too.  I think the main culprit is the complete lack of risk aversion.  I’ve seen plenty of commentary lately about the USD doing damage to the gold price but that doesn’t seem like much of an argument when you look at the chart below

I noted in the last issue that the much discussed revival of the US Dollar wasn't looking that impressive.  That didn’t change until right before this issue was completed.  The ECB had a meeting where it was decided, as expected that the European Central Bank would start tapering its bond purchases.  This is the first step towards the ECB raising interest rates – eventually.

You would expect news like that would strengthen the Euro.  It normally would, but Mario Draghi did a masterful job of laying on the dovishness even as he announced a reduction in QE.  That led to the Euro getting hammered and the USD jumping above the range its occupied since late July.  The Euro lost 1.5% and, as it often does, gold traded down with it. 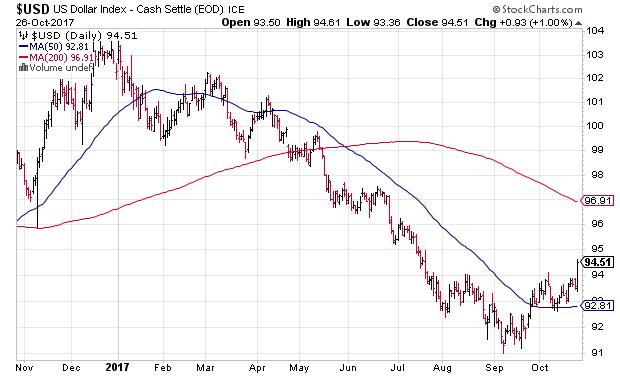 If we look at the gold chart below, I think its fair to say we’re still in the larger uptrend that started last December.  We’ll only have to drop ten bucks to violate the trend line drawn through the December and July lows, so we’re definitely “too close for comfort”. 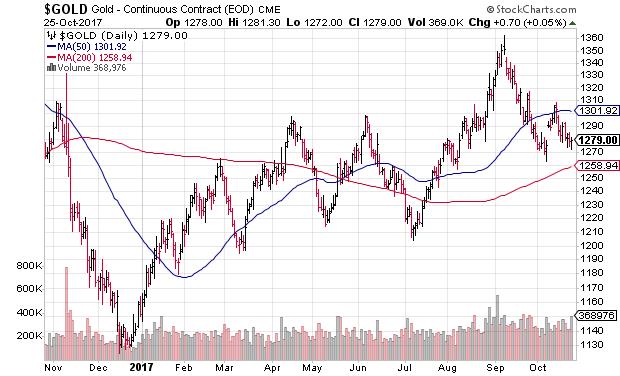 The USD has put in a bottom but its too early to say it’s a long term one.  The US has displayed improving economic strength but so have plenty of other areas.  The move down in the Euro after the ECB meeting was so large I suspect some of it might get retraced.  And, nasty though the drop in gold was after the ECB meeting it was only about a third the size of the Euro move.

It doesn’t feel that way to beleaguered gold followers, but the yellow metal could be trading a lot worse.  Behind the (so far) moderate move in the USD is stronger moves in US bond yields, both nominal and ’real”.

10-year Treasury yields are up 40 basis points since early September and 10-year inflation adjusted yields are up 30 basis points. The last time the USD index was trading at current levels, the gold price was $50 lower.  You can read that as either a relative show of strength or a warning when it comes to the gold price, depending on whether you’re a “glass half full” or “glass half empty” type.  I’m choosing to be optimistic.

Politics, or rather market sentiment tied to politics is another good culprit for gold weakness.  Movement towards some sort of tax overhaul in the US is behind some of the recent strength on Wall St and the general risk on mood that is also weighing on gold.

Washington hasn’t had much luck passing legislation this year, but tax overhaul has broader support.  Companies with higher (current) tax rates and higher offshore money balances have been outperforming.  That’s a concrete measure of the high optimism on Wall St that a tax deal will get done.  A real stumble on that is one of the few things that could create a near term drop in NY equities that would help put a bottom under gold prices.

An important determinant of where US rates will go next year is the FOMC chair.  Yellen’s current term ends in January.  President Trump has indicated (sort of) he wants a new Fed Chair.  I say “sort of” because Trump seemed impressed with Yellen when he met her recently so who knows?

Some potential replacements are considered more hawkish. That might not please Wall St or Trump, who consistently calls for a weaker US Dollar.

The two charts below support a dovish or hawkish Fed stance, depending on which narrative you buy into.  The top chart shows that, while the current recovery is indeed one of the longest, its also the weakest one in decades.

Given that backdrop, the lack of inflation pressure that seems to be confusing the FOMC doesn’t seem surprising.  An expansion that weak isn't straining resources or creating shortages that generate price gains.  The good news is that the very weakness of the advance means it may well last for a while yet.  It doesn’t indicate any pressing need for rate increases though. 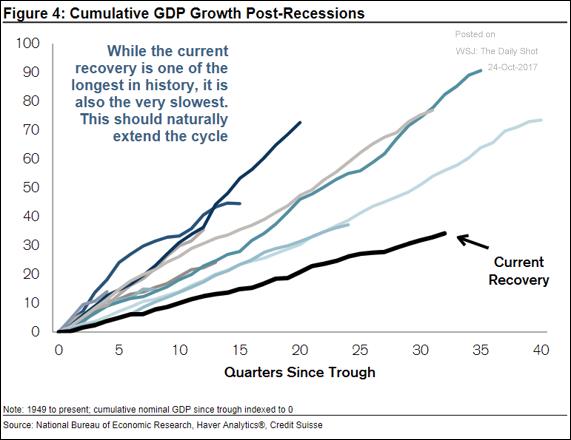 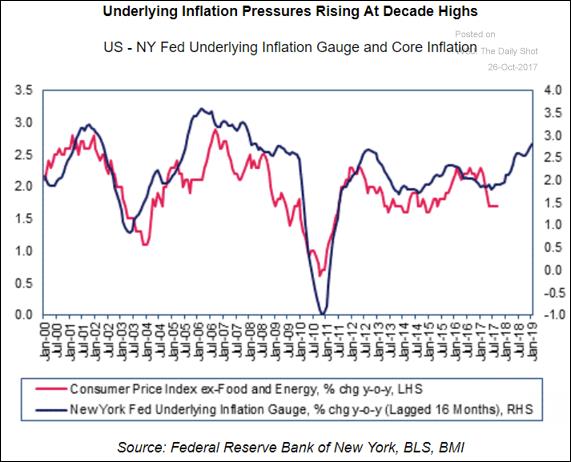 The bottom chart shows actual CPI core inflation (in red) against the NY Fed’s “underlying inflation gauge” lagged by 16 months. The implication of this chart is that inflation pressure will soon increase.  Maybe so, but the NY Fed measure doesn’t seem to account for the recent drop very well and, historically, it seems to

I’m still not sold on the inflation story, but I don’t see the chart as a negative. Either we get fairly rapid inflation increases, which positive for commodities generally, or inflation doesn’t move much and tied the hands of Yellen or whomever is sitting in her chair.  Either way I think metals, base and precious, should have a good 2018 and will plan accordingly.