From the HRA Journal: Issue 280

So far, so good. That may not be your immediate take away as you read the rest of the first page but I’m fairly content with how the first month of the year is unfolding. Yes, I think we may be in for an immanent correction on the major equity markets. But I think that is a GOOD thing, not a bad one.  We are way, way overdue for one. The longer the big markets run without some sort of corrective selling, the more likely it is that the next drawdown is a major, not a minor one. Its better for the markets to just get a correction out of the way and adjust prices and the risk/reward equation to something more balanced and likely to last a while.  Keep in mind we’re focused on late cycle movers like metals.  Its in our interest to have the last couple of acts drag out rather than coming to a quick and terrifying conclusion.

There was a bit less news than I expected in the past couple of weeks but several HRA company management teams promised more would be on the way soon. Fireweed and San Marco provided the exploration good news this issue.

I have heard the requests of several of you for a portfolio list and will try to have that starting in the next Journal issue, or the one after at the latest. Partially in preparation for that, several companies are coming off the HRA list as of this issue.

In the last issue I noted how remarkable, and unusual, the 2017 market in New York was.  Well, if you look at the chart below you can see the streak has not only continued, it’s strengthened.

We’re not even through the first month of the year and the SPX has already racked up a gain equal to a third of 2017’s full year advance.  If anything, trading has gotten even more one sided and the chart has steepened. Therein lies the problem.  I think there is a significant risk (>50%) of a 10-20% correction in New York in the very near future.

Before I go any further I want to make clear that I’m not painting some apocalyptic scenario here.  I’m expecting a correction, not a crash.  While a deep correction does increases the odds of traders panicking and creating something worse but it would still be healthy.  I don’t know a single experienced trader that isn’t uncomfortable about how fearless the current market is.  A correction could return some balance to the market and increase the odds the broader bull run continues.

So why now?  In large part my short-term concerns center on US bond yields.  I noted in the start of the year issue that I wouldn’t get concerned about bond yields unless I saw the upward move steepening.  Well, that’s precisely what happened so 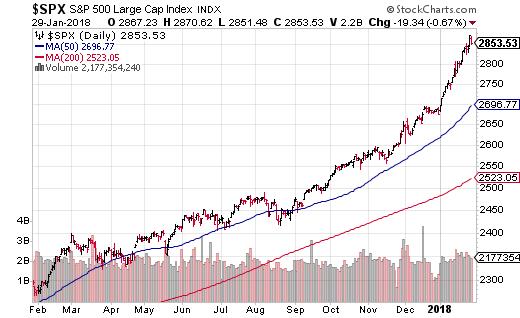 The 10-year Treasury yield (TNX) chart below nicely displays the situation.  After trending down until last September, yields reversed as the Fed got more hawkish   and US economic stats improved.  It took almost four months for yields on the 10-year to climb a bit over 40 basis points by year end.  Since then, things have moved a lot faster.  10-year yields have out in another 30 basis point move in less than a month. 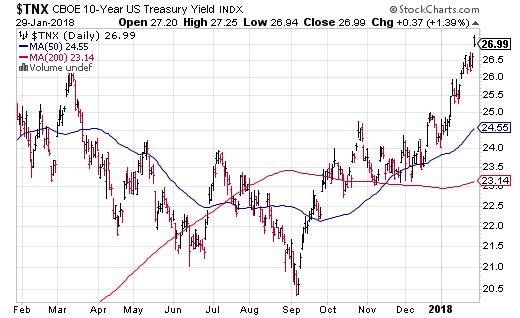 IF the current trend continued, which would be surprising, 10-year yields would reach three percent by the end of February.  That is a level that I think would pretty much guarantee at least a correction as traders see a “three handle” on yields and start extrapolating an continuation of that move.

So, what’s going on here?  To begin with, part of the move in yields is because of the move in equities. Sector rotation explains some of the move. That’s just a fancy way of saying Mom and Pop got sick of measly bond returns and decided to jump on the stock market bandwagon. There have been huge inflows (by recent standards) into equity funds and withdrawals from bond funds in recent weeks.  Hence, bond funds are selling, and equity funds are buying to match those flows.

Last but lot least we’ve got both the sentiment boost and the coming bond supply boost thanks to the US tax cuts. No one but a Republican election strategist (who failed economics) really believes the US federal deficit is going anywhere but up thanks to the tax cuts. There were already expectations as that this year and next would include a lot of new bond issuance.  The tax cuts, and an infrastructure program everyone expects Trump to unveil, just adds to the total.  More supply, lower price, that simple.

Plenty in Washington only read politics into the move by China to decrease its US Treasury holdings.  There was some of that for sure, but I think they also did the math and saw the downside.

The interplay between bond yields and equity returns is elegantly displayed by the bottom chart below from Bloomberg. The ten-year chart compares 12-month dividend yield to the yield on the 2-year US Treasury.  For most of the period covered in the chart, the dividend yield beat the Treasury yield quite handily.

There is nothing accidental about that, of course.  The whole point of QE was to create a chart that looked like the one below, where low yields would help drive investors into higher risk, higher return sectors and provide fuel for growth.

As the stock market climbed, the dividend yield trailed off as increases in dividend payouts couldn’t keep up with the growth in share prices.  It didn’t matter much until the most recent move in bond yields and blast off of the SPX.  Look at the right side of the chart.  After almost 10 years of dividend yields beating the 2-year Treasury yield, the situation has reversed.  That is not a small thing and it might be enough to generate a correction all on its own.

The SPX bulls should be tut tutting right now, pointing out that investors buy stocks for dividends AND capital appreciation.  True, but the future flow of earnings discounted at a risk-free rate should be central to the pricing of large cap stocks. If bond yields are beating equity yields by a large percentage, we’ll see the sector rotation start to reverse. 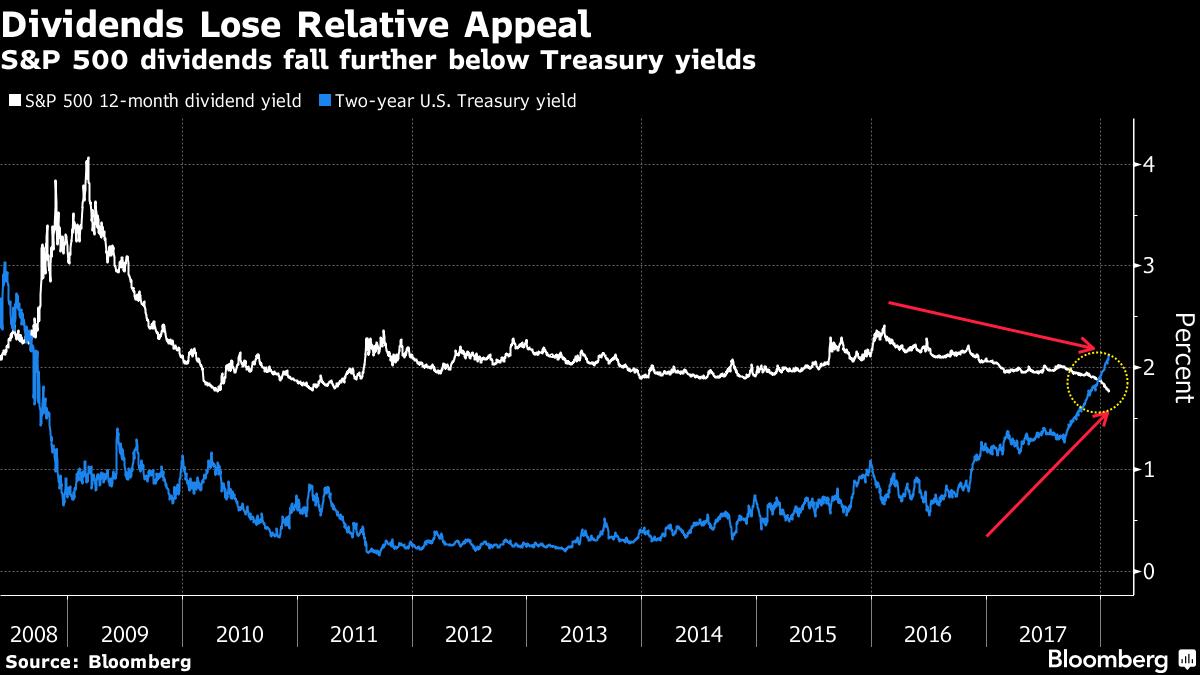 We’re seeing that crossover starting to impact on traders, though its still minor.  The chart of VIX below shows that this measure of risk perception had a fairly big move in the past few days.  Nothing to get excited about yet as its still very low by historic standards.  At a minimum, I think we’re entering a period of higher volatility for the big markets.  I do think that is a minimum outcome though.  A correction, possibly a large one, is the most likely result if recent trends continue. 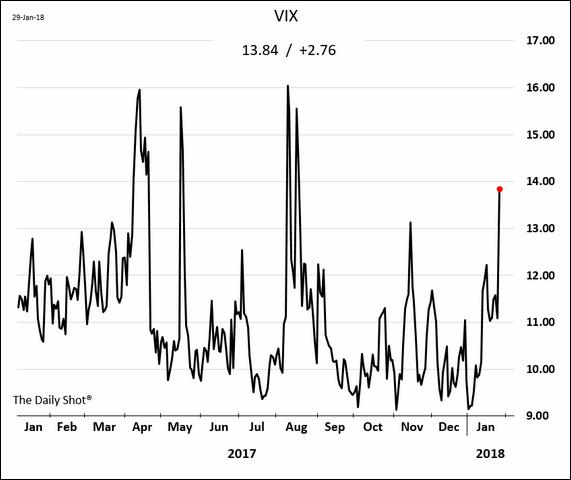 So are we all doomed again? Well, no.  Its perfectly normal, in fact common, for stock markets to experience a large correction without derailing the economy.  Whatever concerns may be growing among stock index traders, they don’t seem to be shared by metals traders, especially base metals traders.

We’ve seen stock markets—and yields—moving higher world wide but also seen an acceleration in economic growth which underpins commodities.  Zinc just hit 10.5 year highs and I don’t think its move is over.  Lead is trading well too and even nickel has seen a bounce.  Copper’s move was cut short by an increase in warehouse inventories, something that has been a quarterly affair for the past two years.

The final three charts speak for themselves. The USD moved lower again but may be bottoming, though mixed signals from Washington, rising deficits and trade deficits will weigh on it.  The drop in the USD helped counter balance the increase in implied real yields.  The top and middle charts show implied real interest rates and gold moving higher together. That is very unusual. 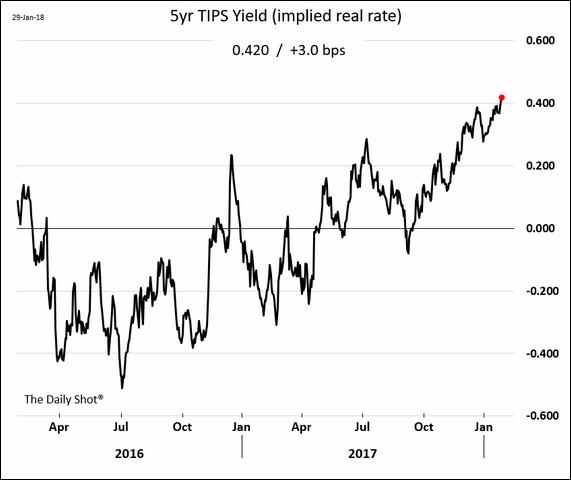 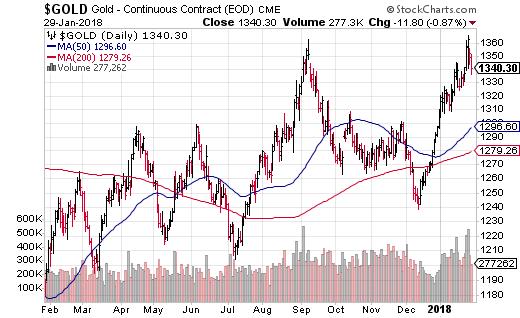 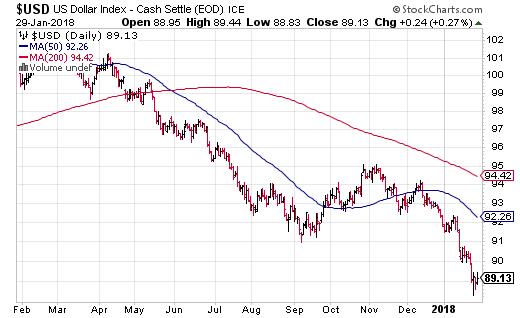 The falling USD is outweighing everything, or traders expect inflation to accelerate and reverse the increase in real yields. I suspect both are true. Falling real yields could generate yet more USD weakness. Its at a 3-year low but the chart looks horrible. It could fall a lot farther if it doesn’t find a base soon.  We’re still on track for a good 2018. even with an SPX correction.