From the HRA Journal: Issue 282

Well, THAT was exciting, wasn’t it?

No?  OK, things did get a bit hairy there and its too early yet to say that we’re out of the woods.  Traders are still extremely skittish and will be for a while.  We’ve had a couple of green days in a row, but they were not booming up days compared to the falls that preceded them.  Plenty of smart traders are counselling people not to be too quick to buy the dip.

That’s generally good advice when you get a real 10%+ correction.  Even if it reverses right away it’s not unusual for it to revisit the low and often it doesn’t hold it.  Note my comments near the end of the editorial about tomorrow’s US CPI print.  If this really is all about yields, and it seems to be, markets will not be happy if there is even a baby inflation spike tomorrow that wasn’t expected.All that said, I still don’t see evidence that this is more than a garden variety correction and there are no signs yet of the US or world economy stalling out.  This too shall pass.  It has at least had the benefit of working off the overbought conditions in metals and the oversold conditions for the US Dollar.   Barring the markets really falling apart, it looks like metals should again start grinding their way higher and the USD lower.  That, and the overall late cycle backdrop, are still the paradigm that we need to generate some larger gains in our little corner of the market.

You can’t say I didn’t warn you.  The editorial in the last Journal on January 29th warned of an impending correction, due to surging bond yields as much as anything. That proved to be prescient as we got a 10%+ drop in the S&P 500 and most other large global indices in the past two weeks.

Yay me, but already consigned to the “what have you done for me lately?” drawer I’m sure.  When something like this happens, traders stop caring about context and start obsessing about tomorrow.  What’s next? Are we done yet? Is this the opening act in a bear market? Am I freaking out too much, or not enough?

All good questions. Mostly impossible to answer, but good nonetheless. Let’s start, whether you care or not at the moment, with context.  Short run, its hard not to trade emotionally in situations like this but, long run, its usually a mistake to.

After all, what’s done is done. There’s no point in focusing on a drop that already took place.  It’s whether we’re at a bottom now that matters.  So far, there’s nothing special about this drop other than its speed, which was impressive.

The chart below from Doug Short shows pullbacks since the last major bottom in 2009.  The current one is only the fifth largest so far. 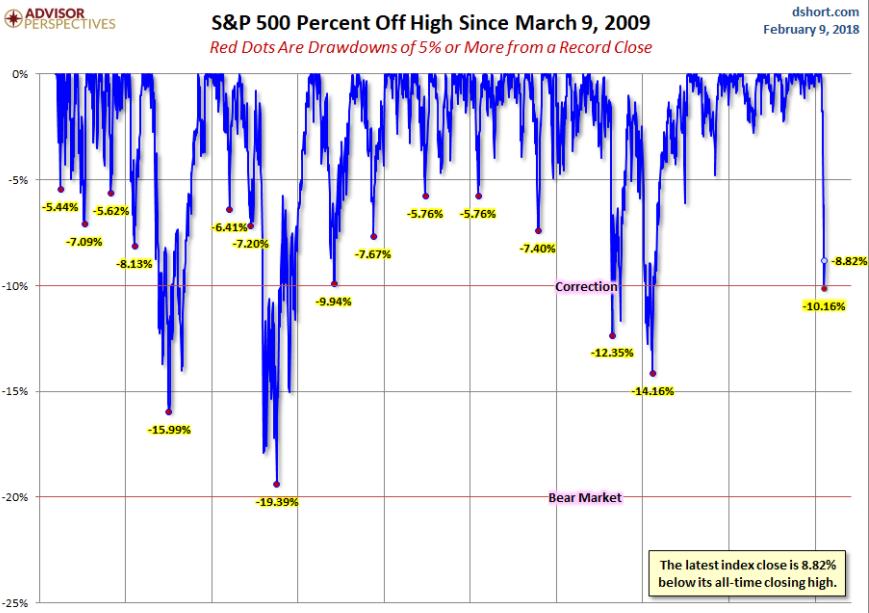 The speed of the drawdown was scary, and we can’t be sure its over yet. Even if we don’t see a lower low than Thursday's aftermarket number things won’t return to “normal” for a while.  One thing that jumps out at me on the chart is the calm through the past two years.  The lack of volatility (until last week) since early 2016 is a big reason traders got brave and the market became as stretched as it was, setting us up for the drop.

That brings us to the updated chart for the 10-year Treasury yield that was at the center of my concerns last issue.  You can see yields just kept pushing higher as we moved into February, with a gap up after the release of a strong US payrolls report. More specifically, it was the monthly wage gain, which spiked the year-over-year wage gains from 2.3% to 2.9%, well above consensus of 2.6% (more on that later). 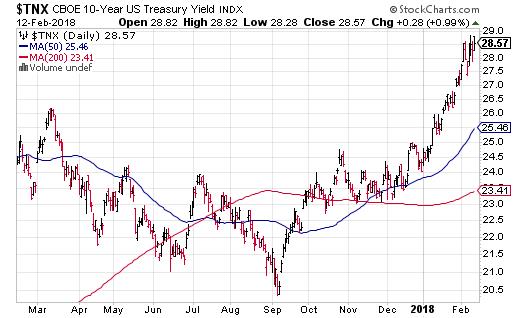 That freaked out traders already starting to get concerned about renewed inflation.  Selling in the bond market sent 10-year yields to 2.85% which seemed to the breaking point.  Things unwound quickly from there, with the SPX tumbling and volatility measures climbing, then exploding early last week.

Bullish traders who have been crowing about the “new paradigm” (never a smart move) and crowding into “short volatility” trades got their comeuppance last week.  Short volatility ETFs and ETNs cratered and one of the most popular was shut by its sponsor, vaporizing few billion.  I don’t think we’ll see VIX readings in the “new normal” sub 10 range again any time soon.

While the “volocaust” got the headlines and the blame, I think it was a symptom of the problem, rather than the problem itself. Traders ignore things. Until they don’t. That seems to be the case with bond yields.  After shrugging through most of the recent rise in yields there were a couple of panic attacks that brought the big boards down by 10% before they bounced.

The chart at the bottom of this page, comparing the 10-year yield and S&P shows the dichotomy.  Yields and equities moved higher together through Q4 and up to the end of January. Then there was a violent parting of the ways.  The last jump in yields above 2.85% was too much too fast for equity trader who headed for the exits en masse. 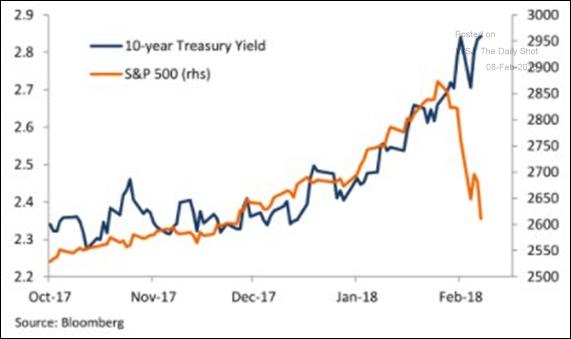 The way we got the second dive reinforces my belief that its yields are what we need to focus on for clues about market direction.  The second drop played off the vote in Washington to raise the debt limit and comments by BoE’s Carney that he was considering raising UK rates more quickly this year. On top of that, a US government bond auction showed lighter than normal demand. 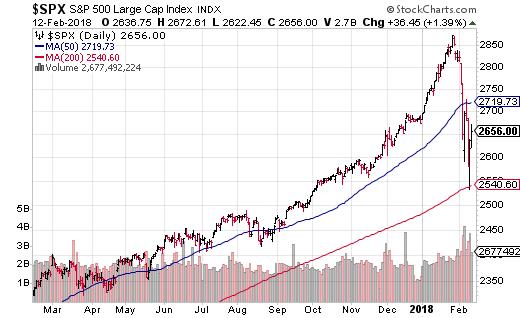 All of this generated an unusual market correlation where we saw equities and bonds falling together and the drops feeding off each other.  Normally, when equities fall hard, investors flee to bonds, bidding up bond prices and driving down yields.  What’s different this time?

The confluence of inflation fears, much higher estimated US deficits and more new spending has traders worried the US will overheat.  I’m not so sure about the overheating part, but it doesn’t much matter in the short run.  Traders are going to react to anything that implies a change in the worse for inflation or higher odds of yields continuing to rise.  Traders do get used to the new normal, however.  It looks like 2.85% on the 10-year note is “ok” now that the market has adjusted downward.  It will probably take another jump, perhaps to 3%, to really freak traders out again.

The main danger in the short run is the market overreaction that leads to some sort of cascade selling event. We’ve already seen that on a moderate scale.  There were a couple of “flash crash” episodes within last week’s drops.  Those were probably selling by algorithmic and risk-parity funds, partially tied to the short VIX collapse.

Last week featured a record amount of withdrawals—$32 billion—from SPY, the S&P 500 ETF. That wasn't retail.  The implication, at least the one being drawn by Wall St, is that these funds are done with whatever de-rising was necessary, in other words they’re done selling.

That may well be true, until it isn’t at least.  $32 billion is a pretty big swing, twice the withdrawals seen during the China devaluation crisis in 2015.  New York did manage a nice rally on the 12th.  Back to back up days brought some calm. As this is written the overnight index futures are all down and the USD is lower again.   Trader’s nerves are not completely calmed yet.

So far, gold and base metals have not benefited from the correction, though I think that is changing. The main reason is that this was a yield driven correction.  Surging bond yields were the cause and those surging yields drove real yields higher. 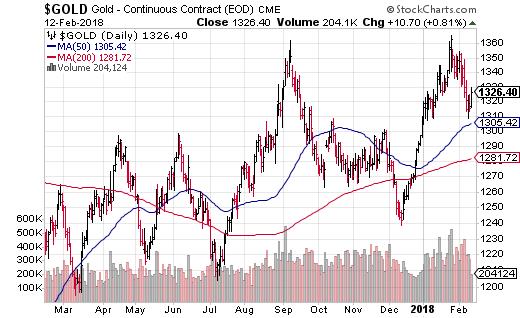 Higher real yields helped the USD rally, as seen in the bottom chart on this page. We all know the effect that has on gold and base metals, as shown in the chart below.  Most base metals fared worse than gold because traders start worrying about recessions when we get corrections.  For the record, corrections are far more common than recessions and rarely, if ever, induce them.  It takes something bigger than a 10% correction to stall out the economy. 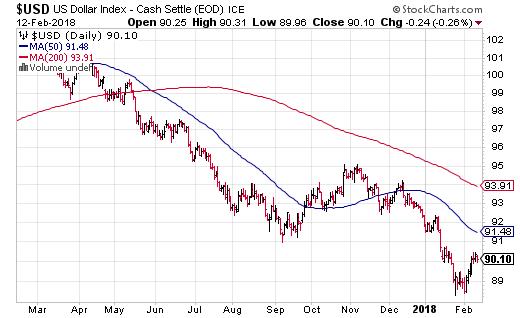 I noted at the start of this article that it was the January wage gain that kicked things off. Since then there have been several good articles that questioned that wage spike. It was concentrated in supervisory employees. Rank and file employees, a much bigger group, saw a much smaller increase.  There are also concerns that seasonal adjustments may have “created” a lot of the gain.  We won’t know until next month of it was a one off.

In the meantime, the most important number to watch is the US CPI reading that comes out tomorrow.  Consensus estimates call for the Core CPI to drop by 0.1% to 1.7% annualized.  The non-core is expected to drop from 2.1% to 1.9% annualized.

The CPI report usually generated yawns, but not this month. January is a tricky month because companies often try out price increases at the start of the year.  Oil prices rose though the month but should not affect the core rate.  A single month’s reading on CPI is usually meaningless but a month over month print of 0.3% on Core CPI or 0.4% on non-core tomorrow and things could get shaky again.

The good news is that gold and metals have worked off their overbought condition and the USD and worked off its oversold reading with the recent small bounce.  The Dollar actually looks like its rolling over again.  If we don’t see a short-term yield surge it could fall further, helping all commodities. Even an inflation spike, after a freak out, could help the gold market by bringing down “real” yields.  We’re still in the danger zone, but metals could soon be friend again, not foe.  Be careful out there!