From the HRA Journal: Issue 285

Gold got a nice lift off after a widely expected rate hike, but it’s been flat to down as markets have been trading very strangely against each other.  We’ve seen continued high levels of volatility, but those haven’t translated to real risk aversion on the part of equity traders.

Add the politics, namely a trade skirmish between the US and China that could still potentially become a trade war, and we have a market that probably should be more concerned than it seems to be.  Traders are not taking the US president seriously, or at least are assuming cooler heads in the White House will prevail.  I’m not sure that’s realistic anymore as the list of cooler heads at 1600 Pennsylvania Ave seems to be getting shorter and shorter.Tensions with China have also hurt base metals, though the percentage losses are not large yet and I don’t think the real impact is that large. China is still importing a lot of base metals and most of those go into local demand like infrastructure, not into things that get re-exported.

Gold explorers and developers still look relatively weak though a couple of the developers on the HRA list, updated inside, continue to outperform.  Like the last issue, the Strong Buys are reserved for a couple of zinc developers, both of which I expect to perform well over the next month or two for their own reasons.

We’re now two months, more or less, into a major market correction.  Its not a particularly nasty one, at least so far, with the biggest drawdown being 10% on the SPX from its late January high.

Still, it’s a distinct change in the overall tone of the markets.  I think traders, across all markets, are still getting used to that idea.  When we get these sorts of shifts, we’ll often see changing correlations between markets.  Actions and reactions between asset classes change, which just makes seeing the way ahead that much trickier.

To use the most obvious example of changed markets, look at the 15-year VIX chart below.  VIX is viewed as a good analogue for “risk”. Strictly speaking, changes in the VIX reading don’t -necessarily— imply anything about the direction of future price changes. Even so, I think most would agree that since most traders are fundamentally bullish, rapid increases in VIX are more likely to foreshadow down moves than up. Markets don’t really like indecision.

While current readings for VIX certainly don’t qualify as “low” they are within the upper part of the range seen from 2010 to 2016. In that sense, the current “risk off” phase is just more of the “old normal”. 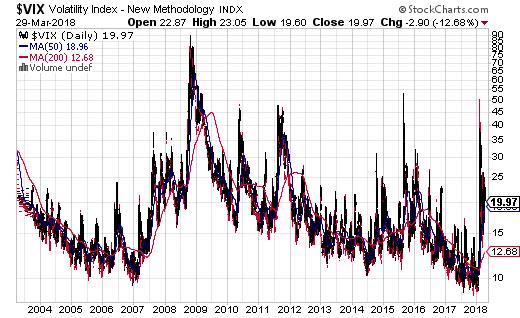 VIX isn’t “a thing” for me. I don’t spend a lot of time looking a VIX charts.  When I generated this one, the most interesting, and slightly disquieting, thing about the chart wasn’t the highs, it was the lows.

Until February, there was a lot of commentary about the “Goldilocks” market that featured historically low volatility in a rising market where valuations only went one way—up.  Nothing seemed to faze traders and all news was good news.

Anyone experienced knew that couldn't last.  What I found disquieting about the long term VIX chart was that the period that most resembled the current one was 2007.  That wasn’t the top of the last bull market, but it was when the cracks started to appear, though it wasn’t recognized as such until later.

Superficially, looking at VIX alone, the current situation looks similar to 2007. “Historically” low volatility, and high valuations followed by a sudden reversal.  It may be the reversal as much as the causes of it that shakes up traders.  Too much complacency is not a good thing in the market.

Obviously, a big VIX reversal and pullback in the markets isn’t enough to portend a bear market by itself.  Unless things get a lot worse this is still just a garden variety correction. It took more than that to create the last financial crisis.  But I think it does mean, at a minimum, we’re in for a rough ride for a while. There are plenty of bullish commentators calling for new highs.  We may get them later but episodes like this are measured in months, not weeks.

We can see on the long term VIX chart that, since markets bottomed in 2009, there have been three other major VIX spikes, in 2010, 2012 and 2016.  All of them accompanied or indicated the start of major corrections; both the 2010 and 2012 drawdowns verged on being official “bear” markets with 20% drops.  In the case of all three, it took several months before the SPX regained its previous high. 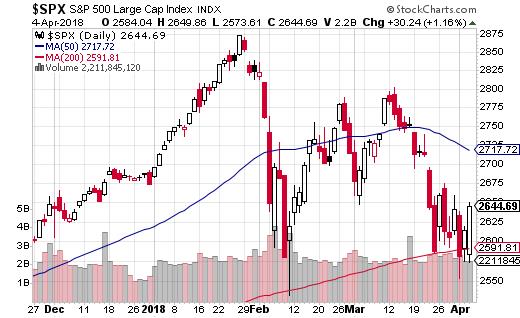 That’s the negative spin. The positive spin is that, for all the craziness out there lately, the SPX has refused to fall more than 10%. While I still think it may take time to get back to previous highs, an argument can certainly be made that we’ve seen the worst of it.

You’ll note from the chart on the previous page that the index has bounced off its 200-day moving average three times.  The most recent bottom for the SPX, which just happened, featured a very strong 3% bounce of the low in the space of a few hours.  It certainly looked like a short squeeze.  Those tend to be violent.  We’ll just have to wait and see if that was just a bear rally, which also tend to be violent or a real near term bottom this time.

While the VIX chart at the top of this article implies a more “risk off” market for equities, we’re not seeing that sentiment spread very far. The graphic below compares percentage price moves for the SPX, the SPX utilities index and gold since late January.  Both gold and utilities stocks are considered “defensive” holdings.  They generally trade against the broader SPX index during periods of market stress.

While we can see some countermovement it certainly doesn’t look like a strong inverse correlation. This tells me that traders really aren’t that worried yet, how ever excited financial journalists may sound.  Defensive sectors outperformed the SPX, but they are still negative over this period. A low positive correlation was as good as, its gotten.

We get the same message from the bond markets. Bonds have had a bid through this equity correction but certainly not the wave of buying you’d expect if traders were really worried.  Ten-year yields are off a few basis points but that’s it. There hasn’t really been much movement in the US Dollar either, though the Japanese Yen, a classic “risk off” trade, has strengthened a bit. 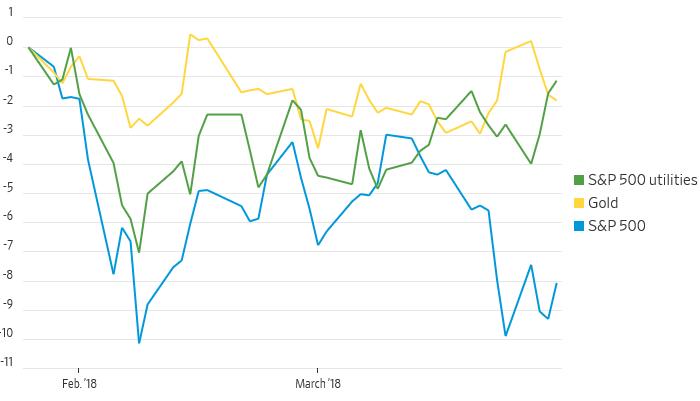 The way asset classes are trading against each other it seems traders are treating volatility as, well, just volatility, not as “risk” in the generally accepted way.  Traders are even taking wild swings in the FAANG stocks, the mainstay of this Wall St bull market, in stride.

The complacency in the face of high volatility means gold has its work cut out for it. Short term, its trading against the SPX again, which isn’t a positive unless there’s another equity down leg. A drop in the USD would work too.  The US non-farm payrolls and the start of earnings season are dead ahead. Very high expectations for both are priced into the market.  A disappointment with either could generate new selling.

Beyond that, we’re dealing with and reacting to political events. And I think that may be the real explanation for the current level of VIX. Arguably the most unpredictable President in US history resides in the White House. There’s literally no telling what Trump will do from one day to the next.  The recent departure of most of the “adult supervision” in the West Wing only worsens the problem.

I think we may finally be getting Trump price into VIX. Traders don’t believe any of his wilder ideas, including all-out trade war, will come to pass.  We’re seeing less and less impact when Trump tweets something crazy.

I think that calm is a healthy development, but I can’t help but wonder if we’re not deluding ourselves by acting unconcerned.