From the HRA Journal: Issue 313

Santa Claus is coming to Wall Street and many other bourses near you. Clearly, traders have all been nice this year as most charts are very much "lower left to upper right" lately.

The market right now is all about liquidity. There's little point in looking at things like earnings estimates or trailing P/E estimates. None of that matter right now. As long as the US Federal Reserve is pumping "non-QE" money into the repo market it seems prices have nowhere to go but up.

Things have been tougher for the gold market but, here too, we're seeing improvement and it looks like the market is set up nicely for a rewarding Q1. Even base metals are getting (a little) more love, thanks to the Phase One US-China trade deal, even if that deal looks like a bit of a joke.

A surge in M&A activity in the mining sector should add more local liquidity as those mergers close and money is recirculated. Even before that, we're seeing some big financings close among the developers on the HRA list. Even the earlier stage explorers are starting to take part, with several placements that had dragged for a couple of months finally closing.

All the above should make for a busy Q1 2020 for the resource space. If we see more gold gains as well, the standard early year resource rally should make its appearance.

As we head toward year end markets in general are enjoying a better than usual "Santa Claus rally" as equity funds buy winners to look smart in year end reporting and retail chases momentum stocks.

There is a lot of index chasing going on. The biggest stocks with the greatest past outperformance are attracting the most money. The five biggest tech names now account for over 16% of the S&P500. The last time we saw that sort of concentration was the height of the tech bubble in 1999.

It looks like clear sailing through year end, and I don't think there is any mystery why either. The graphic below is a longer-term version of the US Fed balance sheet chart I've shown before. Note the arrow on the right side. That takes into account the latest Fed guidance which said they would be making $500 billion available in various short-term durations to get the repo market through year-end and into January.

I noted recently that I come down somewhere in the middle in the "is it or is it not QE?" arguments about this repo funding. In the sense that matters though, I'd say it IS QE. It's clearly liquidity injections and it clearly increases the Fed balance sheet size. And, most importantly, the market is treating it like it's QE and reacting accordingly. The Fed is obviously aware of all this. Stressing that "this isn't QE" while throwing more money at the problem is just splitting rhetorical hairs. 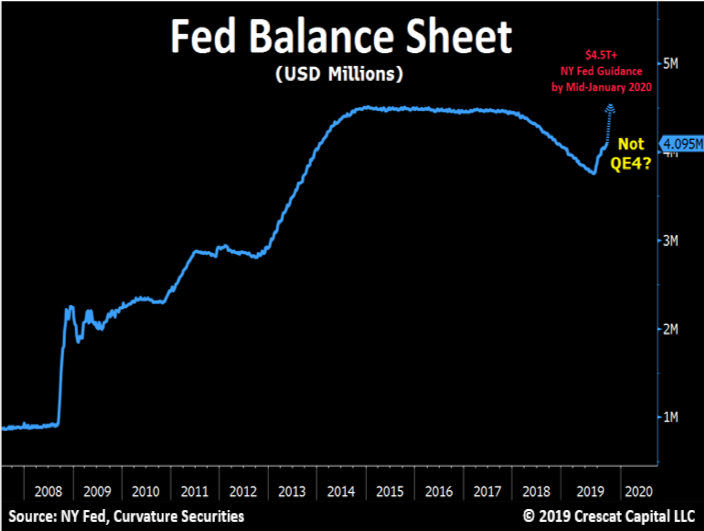 The SPX chart below shows how strong the Q4 rally has been and I don't think the timing is any coincidence. Yes, there has been some trade deal whipsawing, but Powell's admission that the Fed would end QT and start "not-QE" balance sheet expansion coincided pretty nicely with the October bottom. The market hasn't looked back since. 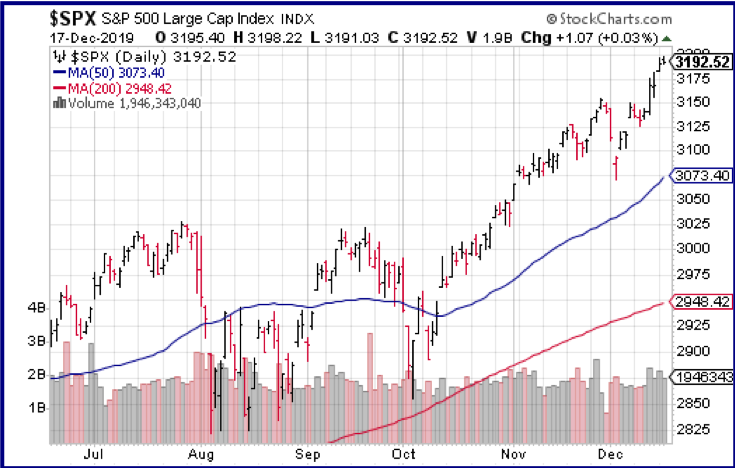 How long can this go on? Hell if I know. It's pretty impressive how large the move has been already. Even though we haven't seen any real earnings improvement sentiment is very bullish. There has been a distinct move from defensive to aggressive funds and ETFs in the past month or so. A lot of this is retail based which should give us pause. As I showed in the last issue there is a huge chasm between CEO and retail investor sentiment. Retail has been 100% right so far.

If there is any danger to Wall St in the short term, it might be overconfidence. Sentiment is vastly one sided and bullish. People that keep closer track of it than I do insist there isn't nearly as much "money on the sidelines" as many say. In short, the biggest near-term danger may simply come from the market running out of buyers.

The "liquidity rally" got a boost in recent days from news that the US and China have reached agreement on a Phase 1 trade agreement. Details are scant, to say the least, but that hasn't stopped Wall St from bidding the market higher. My skepticism about the whole thing hasn't lessened. The descriptions of the deal sound pretty underwhelming; China buys more agricultural products and the US rolls back tariffs. There doesn't even seem to be agreement that there's actually a signed agreement.

The initial market reaction could be summed up as "meh". Even that looked optimistic as (colour me shocked) it wasn't much of a deal and the details won't be made public.

Trump started frantically tweeting about "Phase 2" almost immediately after China held a press conference on Phase 1 which left the market wondering. That seems to have worked as buying picked up steam, a bit, after that. Is Wall St dumb enough to be led around by the nose again on this issue? Probably, as its in their self-interest to be.

All that liquidity and a trade war resolution, regardless of how weak the trade deal may be, may be what's needed to improve CEO sentiment. I still think we need to be concerned about recent signs of slowdown in the US. But if CEOs decide to get confident enough again to increase capital spending and investment the US could dodge a recession for a while longer. We'll see.

Renewed optimism has favoured risk assets. Even so, gold has held up pretty well. It's held a (weak) uptrend since early November as you can see from the chart below. Not a great rally but, I think, still a good set up going into the traditionally strong early months of the year.

Gold miners have fared better than gold itself, as the top chart below shows. The GDXJ has had a stronger rally since early November than gold itself, notwithstanding a pullback in the last few sessions due to trade deal optimism. I'd like to see it at least get back through 40 by yearend but, like gold itself, I think the set up portends better things to come. 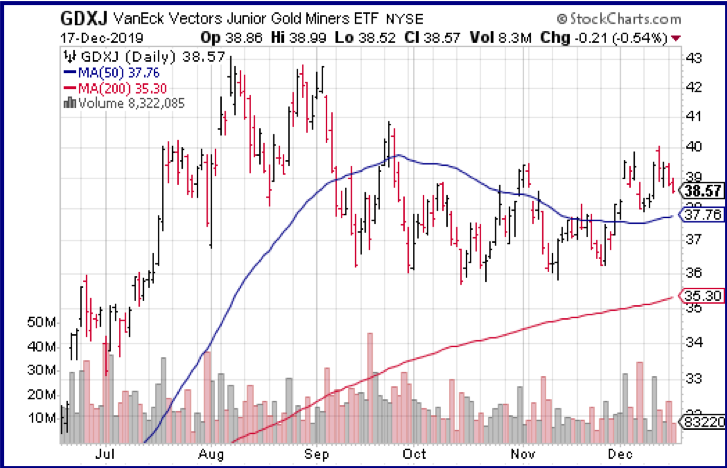 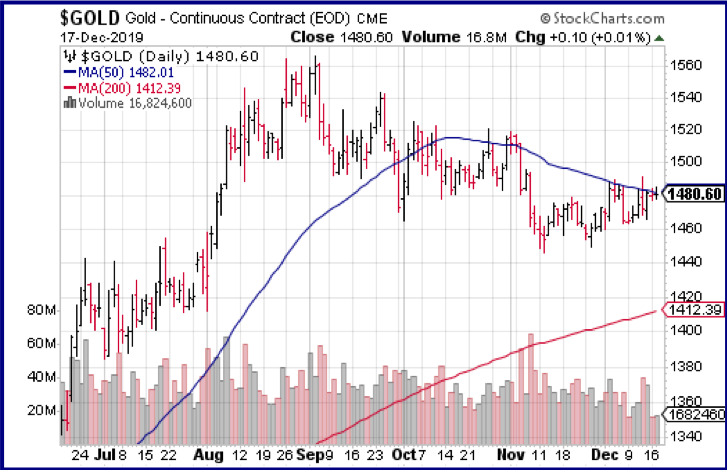 What's supporting it? Not real interest rates, at least not yet. The updated chart of US 10-year yields below shows that the uptrend in yields that started in September continues. This is largely based on renewed optimism, I think. Treasuries are "risk off" assets and there is less demand if traders are optimistic. The huge increase in supply thanks to an exploding US federal deficit also "helps" here.

As I expected, recent guidance from the US Fed is that the three rate cuts this year aren't likely to be followed by more in 2020. The dot plot from this month's FOMC meeting indicated almost all FOMC members expect no rate cuts next year. What the Fed IS saying however, is that they don't intend to raise rates either, even if we see a pick up in inflation. 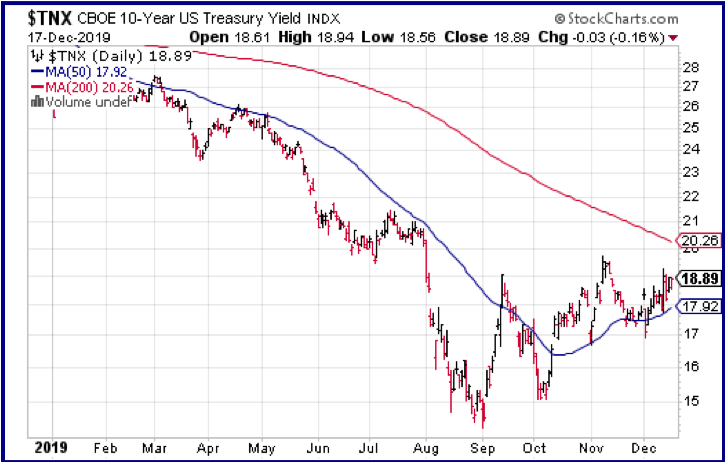 Its no secret the Fed, and other central banks, have been frustrated by their inability to generate even "comfortable" levels of inflation. Inflation has stubbornly refused to increase ever since the Financial Crisis. The Fed has talked inflation targeting, inflation non-t argeting, promised higher core CPI was coming, but nothing has worked yet.

Most recently, Fed Chair Powell has said explicitly the central bank would not step in immediately the prices move higher. He said they would be very patient and allow inflation to overshoot their 2% target, perhaps by a lot, before trying to rein it in.

If the current optimism lingers, and recent increases in raw materials like oil are maintained we may finally see an uptick in inflation. Inflation expectations are still rock bottom though. It's going to take a move to at least 2.5 or 3% I think, before consumers even start to believe it.

The chart below shows one of the likely side effects of that central bank jawboning, which also helps explain gold's resilience. The USD put in another lower high at the start of the month as FOMC members started dismissing concerns about inflation. It fell further as traders started pricing in the potential for real rates to fall if inflation increases. Even a modest increase in inflation will have a large relative impact on real interest rates if the Fed is determined to let it run.

Continuously growing US deficits may also depress the USD as traders are convinced the US will ultimately monetize the debt.

Notwithstanding the Santa Claus equity rally, gold continues to hold up and base metals are getting bid again in the wake of trade deal optimism. While its still a tough market, we're seeing placements start to close again and a huge increase in M&A activity. That combination is increasing money flow into the sector. It's still a large trickle, not a flood, but we're starting to see an impact. 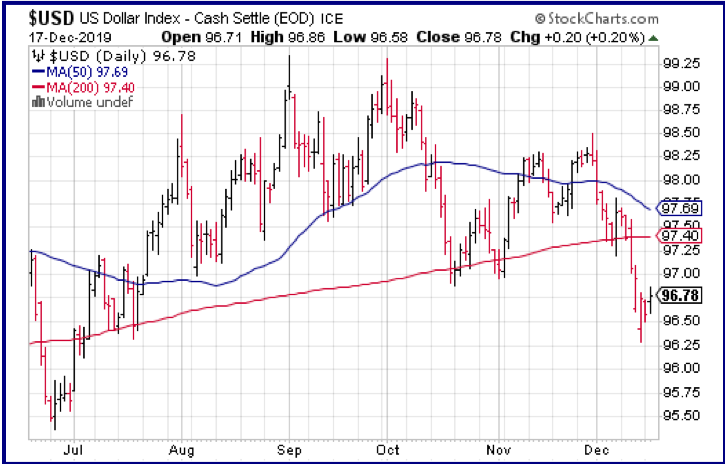 The early months of the year are usually the best period for resource stocks. It looked like 2020 might not be a repeat until very recently. Odds are now much better we get the traditional Q1 rally, especially in precious metals explorers.