From the HRA Journal: Issue 290

Amid all the gloom, several HRA list companies continued to report good precious and base metal drill results and some of them even got a bit of love for them. That trend will be multiplied if we finally see metal prices reverse to the upside. It looks like the bottom may be in for most base metals.

A couple of companies, Constantine and Almaden, didn't get much attention for their results but should have. Plenty of companies announced drill starts between the last issue and this one, so the pace of reporting should ramp up again as we move through August.

Trump to the rescue for the gold market? That would be piling irony on irony, but in today's Washington stranger things happen daily. Whether Trump's "intervention" amounts to anything in the longer-term remains to be seen.

You can see from the chart below that the USD Index looked like it might finally break higher than the 95 range last week. That ended (for now) when President Trump said in an interview that he was very unhappy about the US Fed raising rates and intending to raise them further. He feels this is making the USD too strong and hampering the economic expansion he, of course, takes full credit for.

Is this just a tempest in a Twitter storm or has Trump put a bottom under the gold market and a top on the USD when no one else could?

You can see the impact of Trump's comments on the right side of the USD Index chart. The USD dropped more than a cent, but its already recaptured some of that loss. Truth is, we still don't know if we've got an interim top on the US Dollar.

It seems to me that getting turned back four times in the 95 area—for whatever reason—is a bearish sign. But its only confirmed as a bearish sign if we see it drop below 94 and ideally below 93.5. It hasn't done that yet either. The most unbiased comment I can make is that the USD is best described as range-bound, which its been since late May. My personal bias is that the USD is topping here, and it could be a powerful top at that, but that's based on personal belief, not hard evidence yet. 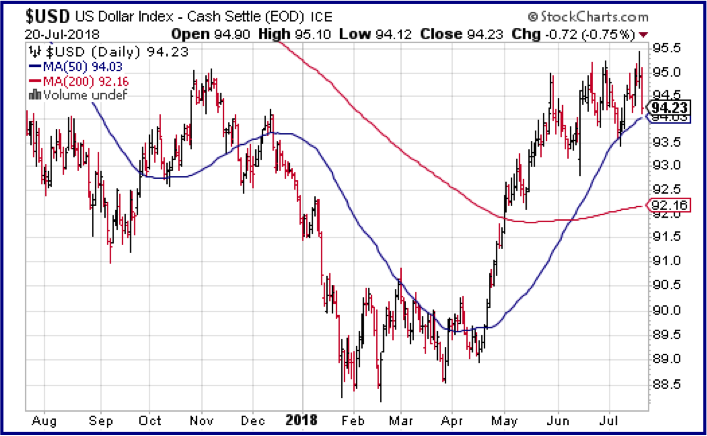 That belief is also clearly not shared by gold traders, base metal traders or, for that matter, Wall St. This continues to be a Goldilocks market for the denizens of Wall and Broad streets. Not wildly bullish, but certainly stronger than I would expect with the threat of a full-blown trade war hanging over it.

Will Trump's Dollar and Interest rate comments mark the turn we've been waiting for? I've commented on the USD. As far as rates go, I'm highly skeptical the Fed will buckle under the pressure of a few angry tweets.

I'm not a gold bug conspiracy theorist. I think most FOMC governors are exactly what they appear to be, people that have reached what's arguably the pinnacle of achievement for an academic economist. They're well paid but won't get rich from their FOMC tenure. The addition of the job to their professional credentials is more important than the paycheque for most of them.

It's convention in Washington for the President not to tell the FOMC what to do. There's a good reason for that. The last president who leaned on the FOMC was Nixon, telling them to cut rates to help him with the 1972 election. Look how that turned out. The FOMC was widely blamed for helping create 1970s stagflation. It wasn't that simple, but I don't think most FOMC members want the infamy they would receive by appearing to bow to Trump.

The chart below shows you that futures traders, including, I'm sure, a bunch of hedge funds and bond funds, aren't taking Trump seriously. Spec traders are HUGELY short the 5-year Treasury note. The positioning for the 10-year and ultra-long-term contract looks the same. Hedge funds, in particular, are known to have vastly increased their long USD positioning in the past 2-3 weeks. The market clearly expects more rate hikes. 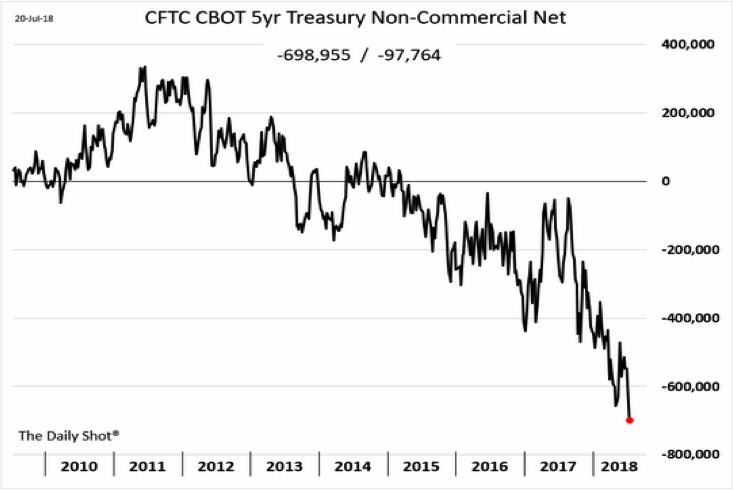 The market derived probability of 4 or more rate hikes stands above 60%. There might be a reason or two for the Fed NOT to raise more than one more time which I touch on a bit later. Based on current evidence and the FOMC members stated preferences, I'd say that 60% probability is reasonable. 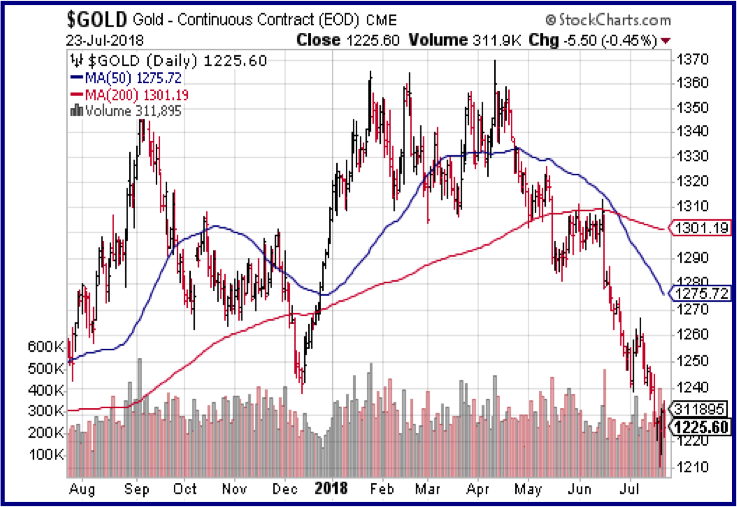 Fear of higher rates is one of the main drivers for gold's decline, along with the general risk—on equity market backdrop. The bad news is clear on the chart above. If you look back to the USD chart above, you'll see the inverse correlation isn't as strong as many would have you believe, especially in the past month or so. The current Gold:USD correlation is moderately negative at -0.52, but far from perfect.

Not surprisingly, the same traders who are betting on higher treasury yields are betting on a higher USD—driven by higher relative interest rates. Speculative long positioning in the US Dollar is now at historic highs. That's one reason I'm not yet convinced about an upside breakout in the USD. Spec traders tend to be wrong at the turns.

Gold is also seeing record high positioning—bearish positioning in its case. Speculative short positions on gold have now reached levels last seen in late 2015, right before one of the biggest rallies in recent years. Given other negative factors, we may yet see a larger short position on gold before things turn but we've got a lot of fuel for a rally now. What we don't have, yet, is an obvious catalyst for that rally.

One thing to watch is the Chinese Yuan. Gold has been following it, as much as anything, for the past month. The Yuan continues to drop, which is no doubt infuriating Trump, but the fall may not be engineered.

Many expect Beijing to cut interest rates to cushion the blow of the trade war. The BoC may have no choice but to enter the market soon to stem the drop and keep it from becoming a bigger political issue. Failing that, China could crank up the stimulus again. I'm not sure that's a smart move longer-term as it just means more debt, but its been a go-to move for Beijing before.

All the comments in the last issue about reasons for a gold rally still hold and are in fact stronger now. Alas, that doesn't mean things won't get worse before they get better. That said, many markets are getting very stretched and, when that happens, mean revision is usually not far behind. Hopefully, the very recent low of $1212 turns out to be the low, but I doubt many traders will bet on that unless we move at least $20-30/oz higher.

That brings us to base metals which, unlike gold, at least seem to be basing. There have been a few recent research reports that back up my positive view on zinc. One from Goldman Sachs pointed to coming bottlenecks in smelter capacity.

The chart below, from that report, shows smelter capacity flat lining. That matters, since western smelters are already at 90% capacity. Chinese smelter groups have been talking about cutting output to help lift zinc prices. Keep in mind that zinc mines do not produce zinc—they produce zinc concentrate. Without a smelter to turn it into zinc metal, it's not much use. Goldman expects the zinc price to move back towards $1.50/lb later this year and early next year.

Copper may have less obvious short-term catalysts but, as I've noted before, we're not seeing warehouse inventories climb. The fall in price is fear of a trade war and lack (so far) of labour disruptions at copper mines. If inventories keep dropping, I expect metals traders to take notice at some point. I think most base metals are at levels where the damage is done and the prices should stop being a drag on companies reporting good results. Not a bull market by any means, but one where we can expect the best in class companies to advance. 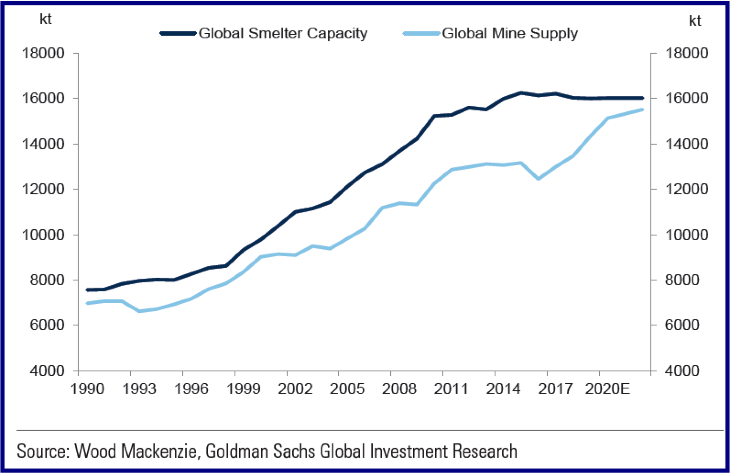 The SPX continues to grind higher, working its way back towards the January high. We know US Q2 growth will be strong, possibly above 4%. Earnings for SPX companies are also expected to be good. With trade disputes multiplying and employment growth topping out, Q2 could be the high-water mark for earnings. It will be interesting to see how many "trade comments" we get from management groups as Q2 earnings season reaches its peak.

Assuming Trump doesn't get his way and the Fed raises rates a couple more times, it will add pressure to the most interest rate sensitive sectors, like real estate. North Americans are getting priced out of many real estate markets already. 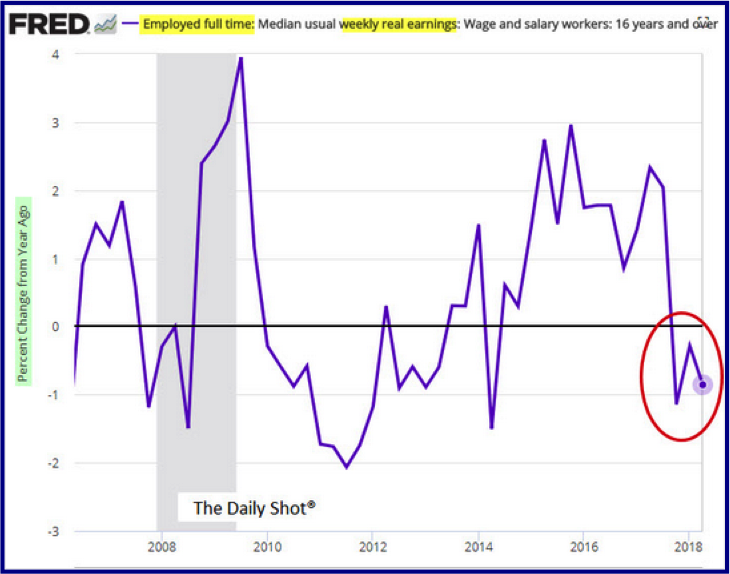 Last but not least, the US continues to have a serious problem with labour income outside the top 10% or so. The chart above reinforces a point I've been making for two years. Real wage gains continue to worsen and are now well into negative territory on a year-over-year basis. I'm honestly shocked we don't see more commentary on this chart.

So far, high levels of consumer confidence—and credit—has kept this trend from impacting spending too much. That can't last forever. Balance sheets are getting stretched and we'll see consumer spending start to fall off soon if the trend isn't reversed. This isn't crash material yet, but it's going to come home to roost before much longer.